Fast, luxurious and practical, the Porsche Panamera is a sumptuous way to go grand touring. But it faces stiff competition from the new Mercedes-AMG GT 4dr...

The GT 4dr is a bespoke AMG model that’s more upmarket than the Mercedes-Benz CLS.

Panamera Turbo can now be had as a plug-in hybrid and with an estate body.

Is it possible to combine cutting-edge looks, performance, practicality and luxury in a single package? Of course it is. Concorde managed it, and that’s celebrating its 50th birthday this year, while Mercedes-Benz first pulled off a similar trick on terra firma 15 years ago when it launched the original CLS, a quick, classy car with rakish coupé looks and four doors.

When the Porsche Panamera joined the fray, it pushed the concept even further upmarket. But if you remain unconvinced by the looks of the coupé version, there’s now a Panamera Sport Turismo estate. And Mercedes-AMG has just introduced an alternative of its own: the new Mercedes-AMG GT 4dr, which offers similar performance for a similar price.

Both are being tested here in their top-spec forms. The plug-in hybrid Panamera Turbo S E-Hybrid is capable of up to 23 miles using solely its 134bhp electric motor. But when it’s not relying on electrons to save the planet, it uses them in conjunction with a mighty 542bhp 4.0-litre twin-turbo V8 to whiz you across its surface as fast as possible.

The GT 4dr, by contrast, makes do with brutish, old-school grunt. Instead of hybrid tech, there’s just a twin-turbo 4.0-litre petrol V8. But what an engine it is, producing a whopping 630bhp from essentially the same unit that goes into AMG’s two-door GT sports car.

On which note, you’re not looking at an extended two-door GT, even though the cars share the same initials and have similar looks. Instead, the GT 4dr shares its underpinnings with the current Mercedes CLS and Mercedes E-Class, in much the same way as the Panamera is, in essence, a Bentley Continental GT under the skin, not an elongated 911. 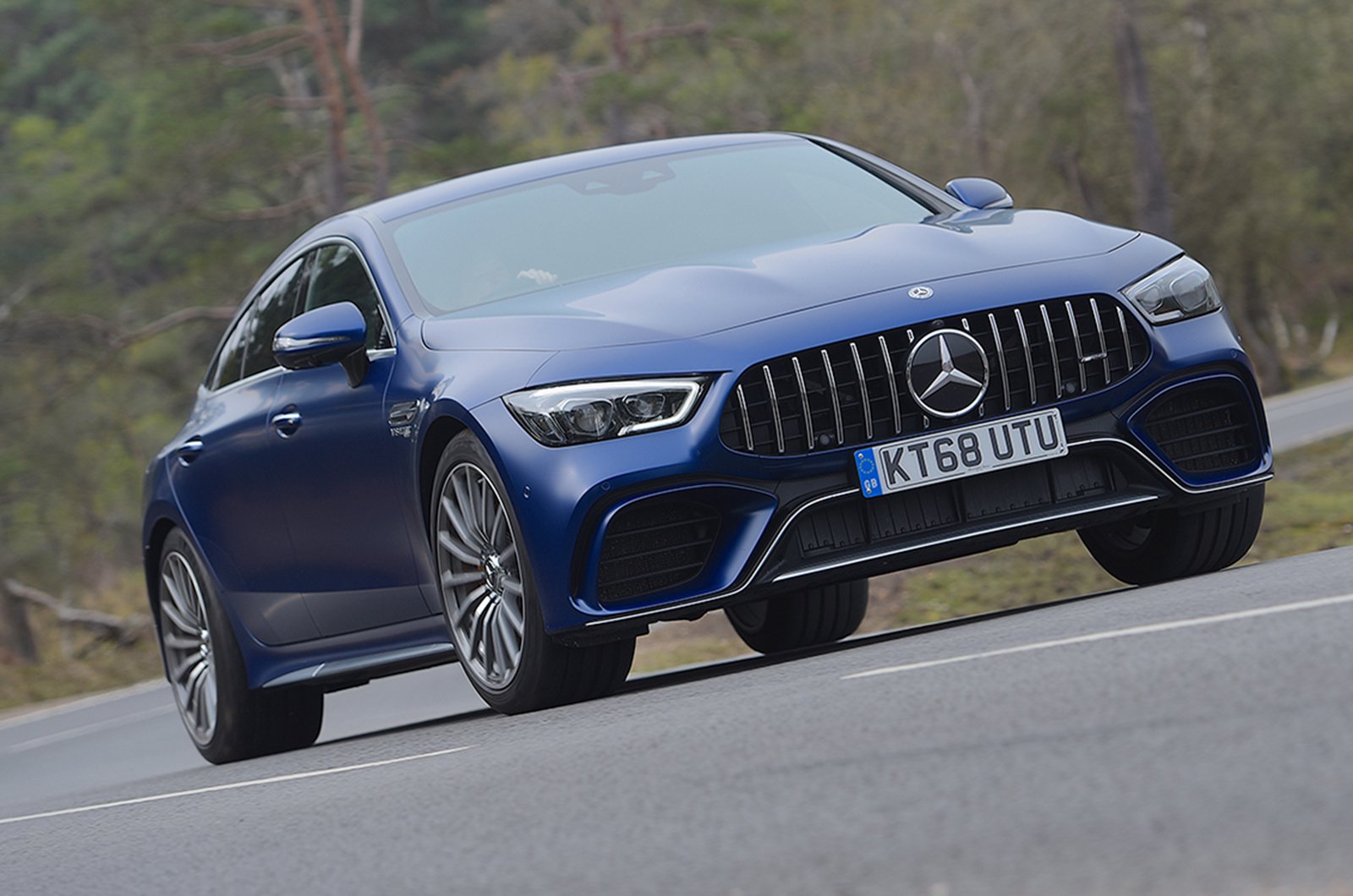 Are there faster cars than these? Yes, if you can afford to knock about with the hypercar set, but you might ponder the need to go any quicker. You see, these two are so explosive off the line that you’d be forgiven for thinking that they can bend time. Just look at the numbers from our test track.

There was a time when 0-60mph in around seven seconds was worth bragging about. But in just 7.5sec the Panamera will be doing 100mph, and for those muttering “Yeah, whatever” to that, the GT will tick by 100mph in 7.2sec. Deploy their highly effective launch control systems –which synchronise their engine outputs perfectly with the traction available to their four-wheel drive systems – and it’s not even tricky to achieve those times repeatedly.

How about more useful skills, such as overtaking ability? Equally spectacular. Both will dispense with the 30mph urban limit and blast to the 70mph motorway maximum in a scarcely comprehensible 2.7sec. And with that sort of pace, praise be for their highly effective carbon-ceramic brakes. The Panamera’s are standard and will pull you up from 70mph in 46.1 metres. The GT’s are optional (£6995) but will do the job in only 43.3 metres.

In other respects, though, they have very different characters. For a start, when the Panamera is running on battery power only, all you hear is a faint whine, which is no more troubling than being in a Eurostar carriage gliding serenely out of St Pancras. But with both their V8s running and set to their sportiest modes, the Panamera produces a purposeful, muted burble from its optional (£2313) sports exhaust. Meanwhile, the GT’s standard sports exhaust bellows out something akin to maniacal thunder. That’s not a criticism; it’s quite joyous.

The Panamera’s automatic gearbox has eight speeds to the GT’s nine. Both can be used as manuals as well, shifting crisply via their satisfyingly tactile steering wheel-mounted paddles. As you ratchet up their drive modes, using rotary switches also mounted to their steering wheels, the changes get even crisper, with the GT’s being punchier on the upshifts and the Panamera more responsive when shifting down. 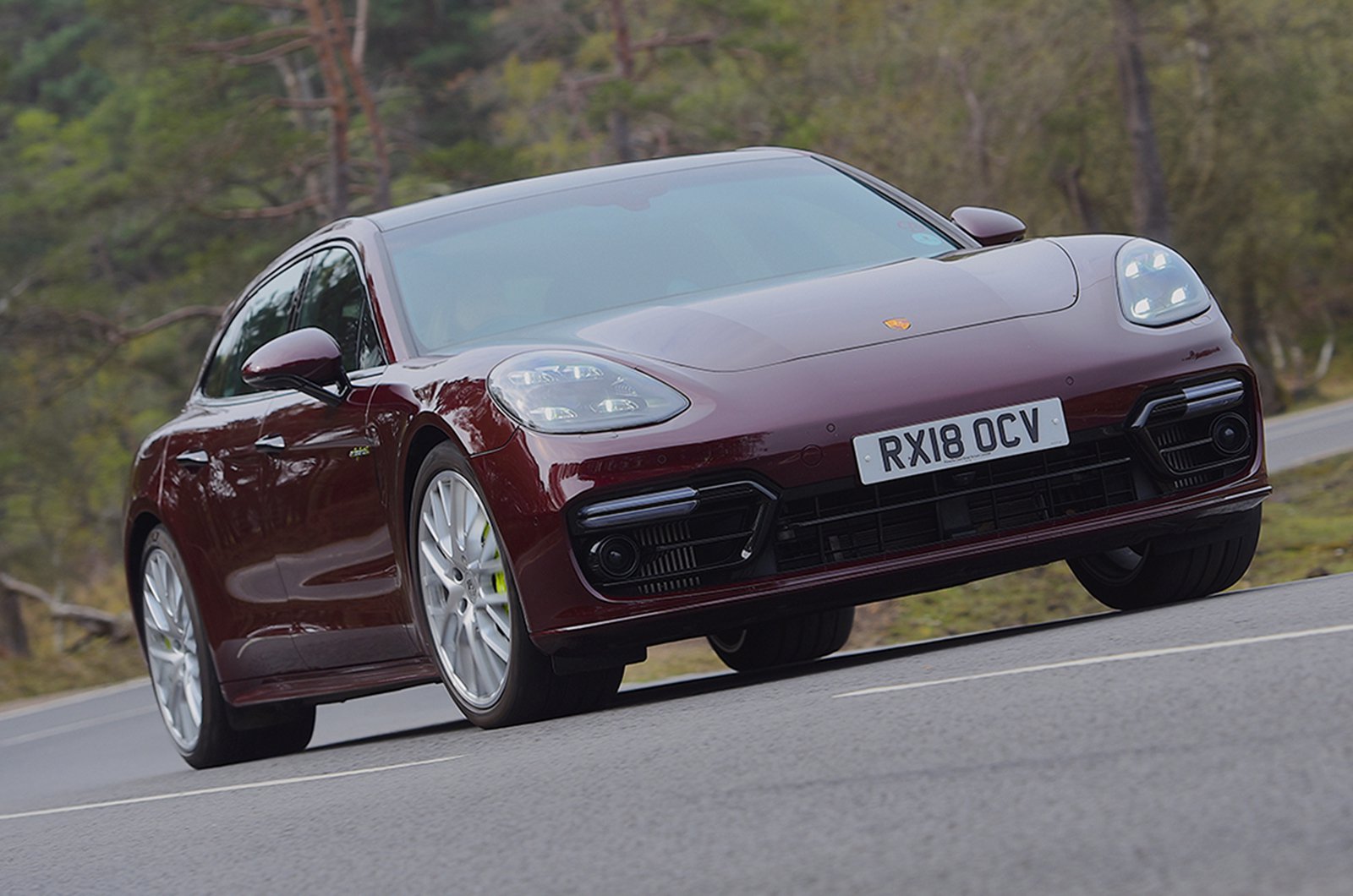 The GT’s gearbox can be jerky at parking speeds, but otherwise this is a dead easy car to drive smoothly. The engine picks up gently and those fantastic brakes feel precise compared with the Panamera’s, which recoup otherwise lost energy to top up the battery but feel either ‘on’ or ‘off’ when you press the pedal.

At a leisurely pace, the Panamera simply feels clunkier; its hybrid system and gearbox chunter with all the silkiness of rusty cogs in a Victorian mangle. But pick up the pace and the whole package seems to harmonise; instead of switching disjointedly between petrol and electric, these two previously conflicting elements unite as one.

That split personality exists in the Panamera’s handling, too. It’s wider and much heavier than the GT, and it feels less wieldy at low speeds. Its heftier steering doesn’t help, adding to its imposing feel around town. That said, four-wheel steering (standard on the GT and a £1340 option on the Panamera) helps these lengthy machines to turn acutely enough, even in a tight car park.

Again, pick up the pace and the Panamera finds greater fluency, and there’s little doubt that it’s technically faster point to point. Its fatter tyres – and the GT’s aren’t exactly small – let you carry extra speed through corners. Its weightier steering also becomes a boon, bolstering confidence through faster bends, as does its more progressive rate of turn. The GT gives you a decent sense of connection, but the binary way its steering builds weight and response makes it harder to carve as neatly through sweeping turns.

Yet while the GT’s body leans farther when it’s pushed, it continues to feel the lither of the two. Over typical British B-road undulations, its vertical body movements are better checked; in the Panamera, you need to stiffen its air springs to maximum to match the control the GT’s air-sprung set-up can muster in just its midway mode.

The bottom line is that you’ll have more fun in the GT. Even its four-wheel drive system delivers added playfulness, with the rear end squirming if you prod the accelerator with enthusiasm out of turns. You can even switch the GT to full rear-wheel drive, if you’re determined to smoke it like a deranged joyrider.

Which is the more comfortable cruiser, though? The Panamera, without a doubt. At motorway speeds, it devours miles like a grand tourer should, with far less fidget than the GT, which bobs up and down like a sugar-fuelled child. While neither car displays real grace over calloused town roads, the GT is markedly lumpier.

The GT’s ride is bearable, though. More disappointing from a £140k grand tourer is the amount of suspension and road noise it generates. The fact that the Panamera falls far short of the serenity achieved by a Mercedes S-Class but still manages to be vastly superior to its rival tells you all you need to know.