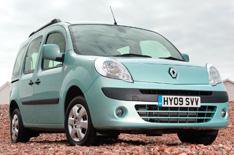 Renault has released details of its all-new Kangoo MPV.

The new Kangoo is bigger than the model it replaces and the cabin now features a 'Flat Floor' system, where the rear-seat base slides forward into the footwell while the seat back folds down to give a large, flat load area.

In-cabin storage includes underfloor spaces, an overhead shelf, aviaton-style lockers and a range of cubbyholes that add up to 77 litres of load space.

Prices start at 11,200 and rise to 14,050. The new Kangoo is available to order now, with deliveries expected to start from early June.