* Nissan calls for more non-financial incentives * Benefits to go beyond current 5000 incentive * Free parking and use of bus lanes... 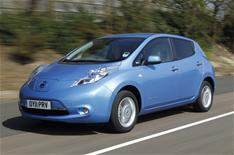 The company's UK MD, Jim Wright, wants owners to get benefits such as free parking, and access to bus lanes.

'It is not just about money,' said Wright. He cited the Norwegian city of Oslo as an example of a place where electric cars have proved popular.

'In Oslo, if you have an EV you can drive in bus lanes, so commutes are quicker, and you get free parking in the city centre, so there are non-financial incentives to take up,' said Wright.

Nissan is on target to sell 4000 of its all-electric Leafs in Norway this year which will match Qashqai crossover sales there.

'If you were able to persuade Transport for London (TfL) to do some of these things in central London, then not only would you have no congestion charge to pay, but you would have many other positive reasons to adopt the technology,' said Wright.

Currently the Government provides up to 5000 as an incentive to buy an electric or low-carbon car.

However, the Government grant has been criticised recently, with only 1700 buyers taking advantage of the incentive.