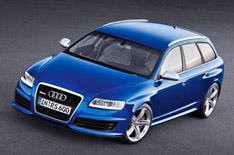 The RS6 Avant's awesome performance comes from the same 5.2-litre V10 as Audis super-swift S6, but twin turbos boost power from 429bhp to a staggering 572bhp.

The result: 0-62mph in 4.6 seconds and a potential top speed on the far side of 200mph, although its actually been limited to 155mph. Few cars accelerate with such ferocity and theres awesome mid-range pull.

You can carry a lot of speed into fast corners, because the RS6 goes round them like a slot car. Its aided by reassuringly weighty steering and a quattro four-wheel-drive system that sends more grunt to the rear wheels than the fronts.

However, it still feels like that big, heavy engine wants to drag you into the scenery through tighter bends. Even with the suspension in its softest setting, the ride is rather lumpy, too.

Refinement levels aren't the best, either. Even though wind noise is kept to a minimum within UK speed limits and the noises from the engine are the sort youll want to hear, the big tyres kick up lots of road noise and the standard automatic gearbox can be jerky as it struggles to cope with all that power.