More for you |
Most and least reliable small SUVsRevealed: the car makers whose discounts have got bigger since lockdownHyundai Ioniq Electric long-term test reviewTop 10 used MPVs for less than £10,000What Car?'s best hot hatches 2020 (and the ones to avoid)
Home
News
Peugeot races to develop hybrid tech
news

* Peugeot could build hybrid sportscars * Technology could filter down to road cars * Peugeot diesel-hybrid next year... 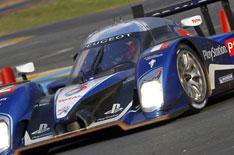 Two years ago the French company demonstrated a diesel-hybrid version of its 908 HDi Le Mans car at Silverstone, but it was barred from racing by the technical regulations in force.

However, Peugeot has continued to work on a hybrid racing car, and with a change in the Le Mans regulations next year there is a chance it could eventually appear on track, helping to accelerate the development of hybrid technology.

'We are still interested by hybrid in fact more than "still",' says the boss of Peugeot-Citroen Sport, Olivier Quesnel. 'I am not sure we will be in Le Mans with a hybrid, but we are going to work very hard on it. We are not going to have three (hybrid) cars in 2011. Our first priority is to win.'

Hybrid race cars pose huge technical challenges in terms of battery technology, weight, energy recovery and safety, says Quesnel, and if these can be overcome there would be big benefits for road cars.

'Almost everything (with hybrids) is a challenge,' says Bruno Famin, the technical director of Peugeot Sport. 'It is quite complicated. We will see if we can have a hybrid in the 90X (the 2011 Le Mans car), but it is too early to have one now. We are still in the early phases of ability.'

Hybrid development has been slowed by the need to create an all-new car to meet the 2011 Le Mans regulations. That car will again be diesel-powered, says the head of PSA Peugeot-Citroen, Jean-Marc Gales. 'The next car for 2011-12 is a diesel. The rules have been fixed, but what we do for 2013-14 is open to question.'

'Target number one is to win races,' says Famin. 'Our top management always tell us to have the best solution to win, at Le Mans in particular. Afterwards, if we can do something that will match with the marketing people better we will do so, but it has to come second.

Peugeot will launch the world's first diesel-hybrid road car in the 3008 crossover next year, and follow it up with a diesel-hybrid version of the new 508 saloon. Both will have a 2.0-litre HDi engine to drive the front wheels and an electric motor to turn the rears, with a combined 200bhp.

'I do not want to say much about our hybrid racing technology at this stage,' says Famin, 'but it is a very exciting challenge. It is a big step forward in technology.'

Further into the future, he believes racing could also help develop better batteries for all-electric cars, and even promote hydrogen fuel-cell technology. 'Even in 20 years' time there will still be some idiots trying to go round a track faster than anybody else,' he says.