* On sale in spring * Petrol engine to be joined by diesel in September * Prices tipped to start from 18,000... 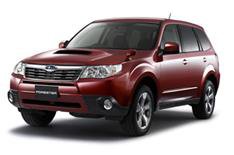 Subaru has released the first official images of the Forester, which will go on sale in the UK this spring.

The Nissan X-Trail and Honda CR-V rival is based on the new Impreza platform.

It has a wider wheelbase and track than the current model, which should improve interior space and handling.

No prices have been announced, but they are expected to start at around 18,000.