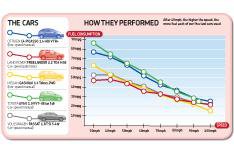 So is 55mph really the efficient speed that it's often made out to be? In short, no.

Peter de Nayer said: 'The results of our tests disprove the idea that there is an optimum cruising speed - around 55mph - below which fuel consumption increases.'

What the results did show was that, basically, the slower you're going in top gear, the more miles per gallon you're doing.

Don't think you can go only a little bit faster and use only a little more fuel, either - the amount of fuel burned every mile rises exponentially the faster you go.

It's all down to wind resistance - the greater the wind drag, the more work the engine has to do, so barrel along at 100mph rather than 50mph and your engine will use roughly five times the fuel.

You'll cover twice the distance in the same time, of course, but that still works out to more than double the fuel for every mile travelled.

This doesn't mean you should drive around at 10mph in sixth gear. For one thing, it wouldn't do your car much good, and you may as well walk (quickly).

Still, you might be surprised how much you could save by knocking just a few mph off your speed and changing up gears earlier. How much you can save depends what kind of driving you're doing.