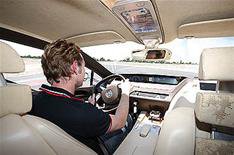 Mercedes says the benchmark engine for the luxury car class is either a 3.5-litre V6 petrol engine or a 3.0-litre V6 turbodiesel. Its Diesotto engine has to match the performance of these engines while slashing their emissions. It does a pretty good job.

Acceleration is also on a par with the benchmarks, reaching 0-62mph in 7.5 seconds.

The 'green' stats are even more impressive. The F700 is capable of 44mpg while emitting just 127g/km of carbon dioxide, which is less than a Ford Focus 1.8 TDCI, for example - quite incredible for a luxury car.