Volkswagen vans are often thought of as being rather expensive, but the Caddy Cargo has a starting price comparable to similar-sized rivals. It’s also predicted to hold on to its value well, with depreciation expected to be slower than for the equivalent Ford Transit Connect, Peugeot Partner, Toyota Proace City or Vauxhall Combo Cargo.

In terms of available trims, you have three to choose from: entry-level Commerce, Commerce Plus and Commerce Pro. We rate the Commerce Plus trim as the best-value option, because it gets some genuinely useful options over the sparsely equipped Commerce, including climate control, rear parking sensors, storage compartments under the seats, an armrest for the driver’s seat and a leather-trimmed multi-function steering wheel.

While the Caddy Cargo doesn’t get the 10.0in screen from the Golf (that comes as standard on Commerce Pro), that’s no major loss. Instead, we’d simply tick the box for the optional and very reasonably priced 8.3in touchscreen – a perfectly adequate system for most users.

It also benefits from a staggering number of safety aids – most of which have been borrowed from the current Volkswagen Golf. Automatic emergency braking (AEB) comes as standard, while adaptive cruise control, road sign detection (which adjusts the cruise control to the speed limit) and lane-keeping assistance are all optional. It’s little wonder that, once you master the technology, this is possibly the easiest van to drive on the market.

A Thatcham Category 1 alarm system can be added to the Volkswagen Caddy Cargo in Commerce and Commerce Plus vans and is included as part of the Business Pack, along with rear parking sensors and air conditioning for the Commerce trim level. 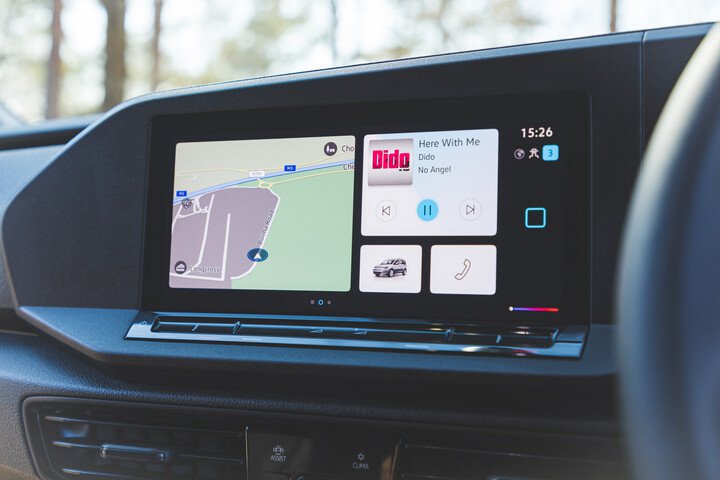