A spaceship landing in the brand's line-up. That’s how the Audi R8 was described – by Audi – when it arrived well over a decade ago.

Back then, we were used to Audi’s considered approach to its everyday models and also its flurries into motorsport, most notably with the legendary Audi Quattro rally car. But a supercar? That was new. That was news. And, a decade or so on, the R8 has garnered the respect of its rivals.

It comes in two different power outputs and both sport well north of 500bhp. Both versions come with an S tronic seven-speed dual-clutch automatic gearbox, but there’s a choice of rear-wheel drive or quattro four-wheel drive.

Is all that enough to make it the pick of a talented bunch of seriously respected supercars? Read this review to find out. And whichever car you settle on, visit the free What Car? New Car Buying service to see how much we can save you on scores of makes and models, including the Audi R8.

On top of the noise though, there’s another reason the R8’s V10 is so good; it’s naturally aspirated. That means that there’s no turbocharger inducing lag (the delay between putting your foot down and the car starting to accelerate) like you’ll feel in the turbocharged Mercedes-AMG GT (even if it is only slight). Instead, this V10 responds instantly to every tendon twitch and rips through the rev range to 8000rpm.

It doesn’t feel as forceful at low revs as a turbocharged engine, but who cares? It’s far from weak and in higher gears, at low speeds, it starts pulling well from 3000rpm. Yet the real fireworks begin after 5000rpm, and that staged trajectory adds to its appeal: the shove isn’t all in one hit, like a turbocharged slam dunk at 1500rpm.

You’ll be rewarded for revving it out with potent performance. So potent that even the entry-level RWD is fast enough, rattling off 0-62mph in 3.7sec. Not quite fast enough for you? The Performance quattro knocks over half a second off that (0-62mph in 3.1sec), owing to its extra power and the added four-wheel-drive traction.

But what about handling? Well, while the steering is well-weighted it doesn’t quite give the same engagement as the 911 GT3, nor does it communicate information about the road surface or how much grip you have with quite as much clarity. Even so, it’s intuitive and direct enough to allow you to place the car with accuracy.

Likewise, the R8 isn’t quite as hungry to dive for an apex as the Ferrari F8 Tributo or 911 GT3. But we're talking small degrees here, and the Performance quattro versions have that advantage of amazing traction to counter. At the same time, their four-wheel-drive system is rear-biased, so they’re still playful but unlikely to bite by spinning you through a hedge.

That said, the R8 RWD is just as approachable. It rotates from the rear as you back off the accelerator on the way into a corner, then maintains a predictable slide as you power out. It’s so much fun that it’s our favourite version, even though we accept that the Performance quattro is technically superior, especially in the wet.

When you need to slow down, the R8’s standard cast-iron brake discs offer good stopping performance and lots of feel at high speed but they’re a bit snatchy around town. The Performance quattro is equipped with ceramic brakes as standard, which are less likely to overheat on a circuit.

So far, we’ve been talking about the R8’s speed, noise and poise, but what about its usability? Well, it turns out that it’s one of the most useable supercars you can buy. When the engine’s not being thrashed, it’s pretty quiet and there are no annoying theatrics, such as the contrived pops and bangs you hear from the tailpipes of the Vantage and AMG GT. It’ll even be more efficient than those rivals, thanks to its ability to shut off five of the ten cylinders when you’re cruising around.

The gearbox, which is as fast and responsive as you need it to be on a track, is smooth and jerk-free around town. What’s more, at 70mph on the motorway, the R8 is pretty hushed, suffering from less wind and road noise than a 911, a car that’s generally perceived as the go to ‘usable sports car’.

The R8 also rides better than the 911, especially the RWD. It doesn’t have fancy adaptive dampers (optional on the Performance quattro) that can change stiffness at the touch of a button. Instead, you get one setting that is unbelievably compliant, working as well at keeping things settled at speed as it does absorbing sleeping policemen in the city. There’s no sense of peril every time you’re faced with a ramp or ridge, either. Unlike the Huracan, which will graunch its nose on a piece of discarded chewing gum, the R8 climbs them with ease. 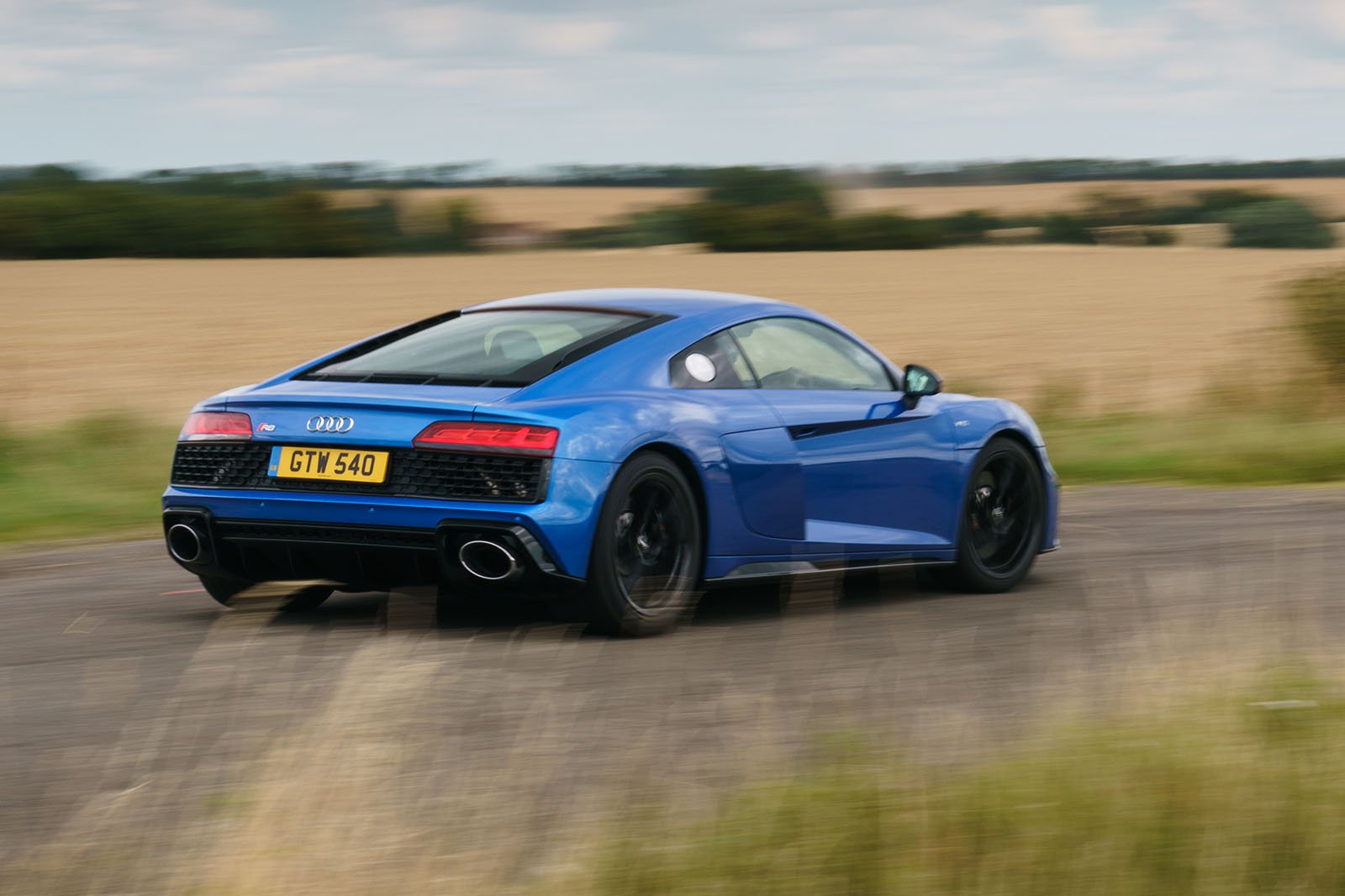