Now in its second generation, the Audi RS Q3 is what you get when you feed the German brand’s family SUV nothing but red meat and protein shakes, then force it to live in a gym. Like with its predecessor, muscle is provided by its 2.5-litre turbocharged five-cylinder engine, which sends 395bhp to all four wheels via a seven-speed dual-clutch automatic gearbox.

Thanks to launch control, that’s enough power to slingshot the RS Q3 from 0-62mph in a mere 4.5sec and on to an electronically limited top speed of 155mph. For the first time, there’s a choice of two body styles; you can either have the regular RS Q3 or the more rakish, if slightly less practical RS Q3 Sportback.

Although you could argue the RS Q3 is frighteningly expensive – even the cheapest version has a price that starts with a five – it’s worth pointing out that its performance is very closely matched to the far more expensive Porsche Macan Turbo and not far behind the Jaguar F-Pace SVR. Of course, you’ll still get rapid acceleration in the far cheaper Volkswagen T-Roc R or BMW X2 M35i, it’s just that, in these, your passenger’s necks won’t take quite so much of a beating.

So, read on to find out if there’s more to the RS Q3’s driving experience than just its rapid acceleration, as well as what it’s like inside and how it’ll be to live with. If you’re ready to buy the Sports SUV of your dreams, don’t forget to peruse our New Car Buying section for big savings on tonnes of new cars. 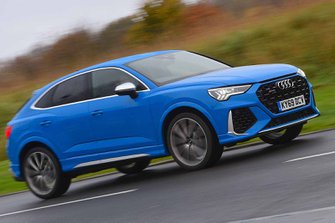