At the moment, the Citroën e-C4 only comes with a 134bhp motor and a 50kWh battery – although, strictly speaking, the usable amount of charge the battery will hold is 45kWh. That makes it quite a bit smaller than the Volkswagen ID.3 Pro Performance’s 58kWh battery, and is one of the reasons why the e-C4’s range isn’t that amazing.

Officially, it’ll do 217 miles. However, when we tested it, the real-world range was more like 139 miles, which is about the same as the Kia e-Niro 39kWh (test range 140 miles) and well behind the ID.3 (test range 197 miles). All three cars were tested in the same conditions at the same time, on a private test track, although not to the more exacting scientific standards of our Real Range tests ­– we’ll be putting the e-C4 through that assessment as soon as possible.

So, the e-C4 isn’t the best long-distance electric car for the money, but is it the fastest? Well, no, it isn’t that, either. The best we could extract was 0-60mph in 9.0sec, which is decent (the same as the DS 3 Crossback E-Tense or Peugeot e-2008, for instance) but a long way behind the ID.3’s 6.6sec sprint. You’ll also find that the e-C4’s acceleration really starts to tail off between 50-70mph, so bear that in mind if you do a lot of motorway driving. Its pace is absolutely fine around town, though.

If you like a cosseting ride, the e-C4 is a car worth looking at. Rather like the e-2008, it’s set up to be quite soft, making it relatively settled over minor imperfections on motorways, while also cushioning you well over bigger ruts and speed bumps. It’s certainly less jarring than the firmer ID.3.

It’s not perfect, though. If you hit something with a sharp edge, like a particularly nasty pothole, it twangs loudly. And because it’s softer, there’s a lot more vertical body bounce along a country road strewn with moguls than there is in the ID.3. Mind you, it’s not as bad in that environment as the rather under-damped 3 Crossback. 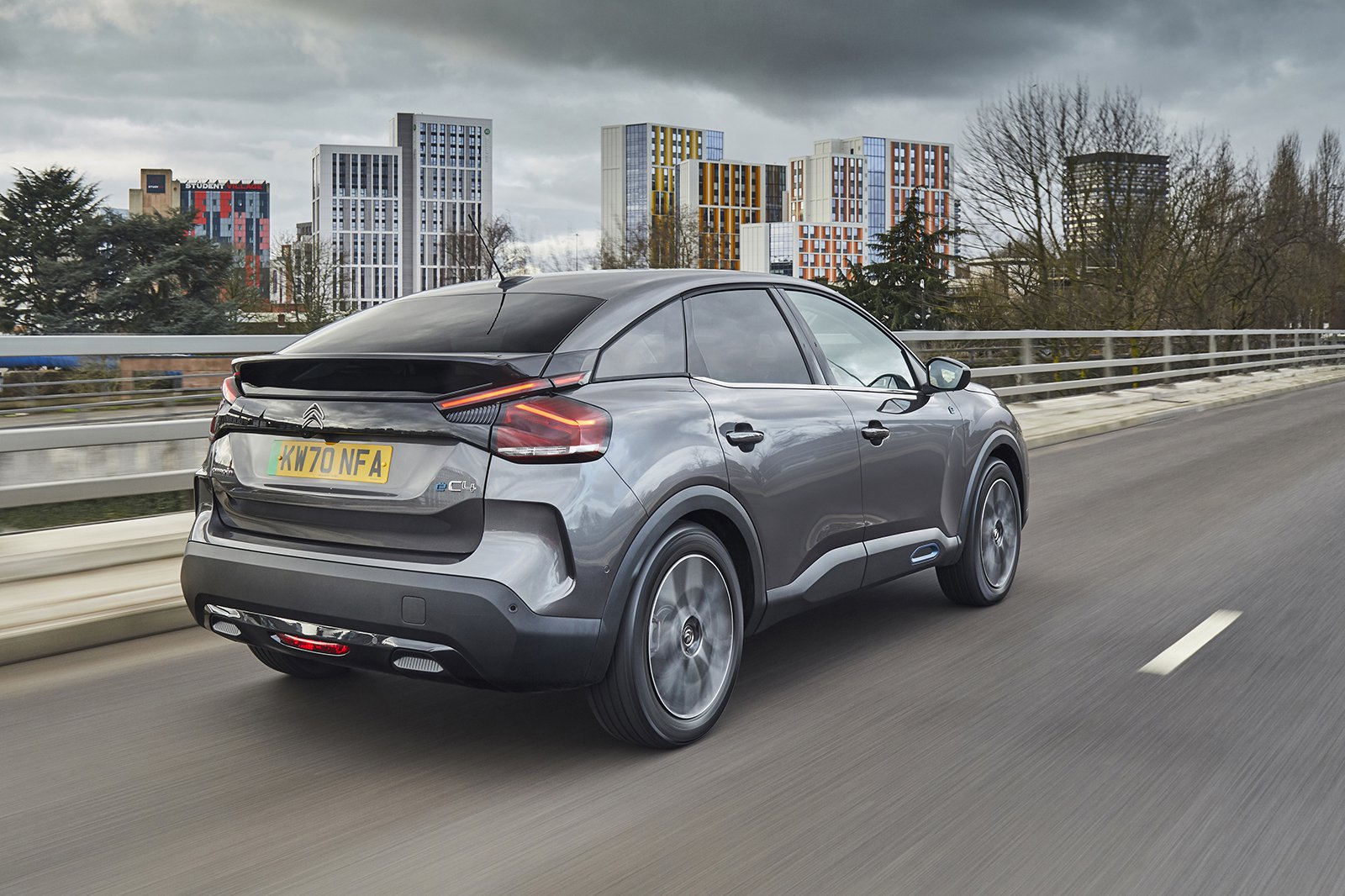 Don’t buy the e-C4 if handling finesse is something you’re keen to enjoy. That’s not to imply it’s skittish, because it’s actually an easy car to drive, either in town or on faster roads, with light, yet faithful steering and decent enough grip.

But it couldn’t care less about feeling sporty. There’s quite a bit of body lean – although not as much as the 3 Crossback has – and it’s nowhere near as agile as the ID.3. The e-Niro is also a sharper car to drive, most appreciably if you go for the more expensive Long Range 64kWh model – the 39kWh version isn’t as stable or balanced.

At motorway speeds this is one of the quietest cars in the small electric class. Rather like the equally exceptional e-2008, it cuts out a lot of the road roar that you hear in rivals like the e-Niro and ID.3. There’s some wind noise, but it’s not intrusive.

We count brake pedal feel (rather than ultimate stopping power) in with refinement, too, because if you can’t stop smoothly, that’s not exactly refined, right? The e-C4’s regenerative brakes, which capture energy and feed it back into the battery when you slow down, do leave you with a light brake pedal, but they still have enough progression to let you stop gracefully.