As with a lot of small SUVs, you don't feel that high off the ground in the Countryman – it's certainly no Range Rover. Still, you feel farther from the road than you do in the more hatchback-like Skoda Kamiq. All Countrymans come with a well-bolstered driver's seat that is not only comfortable to sit on for an hour or more, but offers excellent support in corners, too. The Exclusive and JCW trims come with adjustable lumbar support as standard, otherwise it's an option, but all models get driver's seat height adjustment.

Our biggest gripe is the spring-loaded backrest, which is fiddly to adjust in small increments; if you go for the optional electric seat adjustment this problem disappears. Regardless, the steering wheel has lots of reach and height adjustment so drivers of all shapes and sizes should be able to find a comfortable seating position.

There are digital dials behind the steering wheel that are easy to read – apart from in strong sunlight. That's because there's no cowl to shade the screen. If you prefer, there's also the option of a head-up display. We also love the retro toggle switches and large air-con dials, not because they look good but because they’re dead easy to use while driving along.

Forward visibility is okay; the windscreen pillars are a little chunky but positioned in such a way that allow you to see around them easily at junctions and roundabouts. Looking over your shoulder, the view is better than it is in a lot of small SUVs, perhaps with the exception of the Skoda Kamiq, although the shallow rear screen makes it tricky to see what’s directly behind the car.

Rear parking sensors are standard, though, and you can add sensors to the front and a rear-view camera if you add the expensive Comfort Pack Plus (standard on the JCW). Night vision is advanced by the standard LED headlights, which you can upgrade to adaptive Matrix LED headlights that can stay on main beam without dazzling other road users. 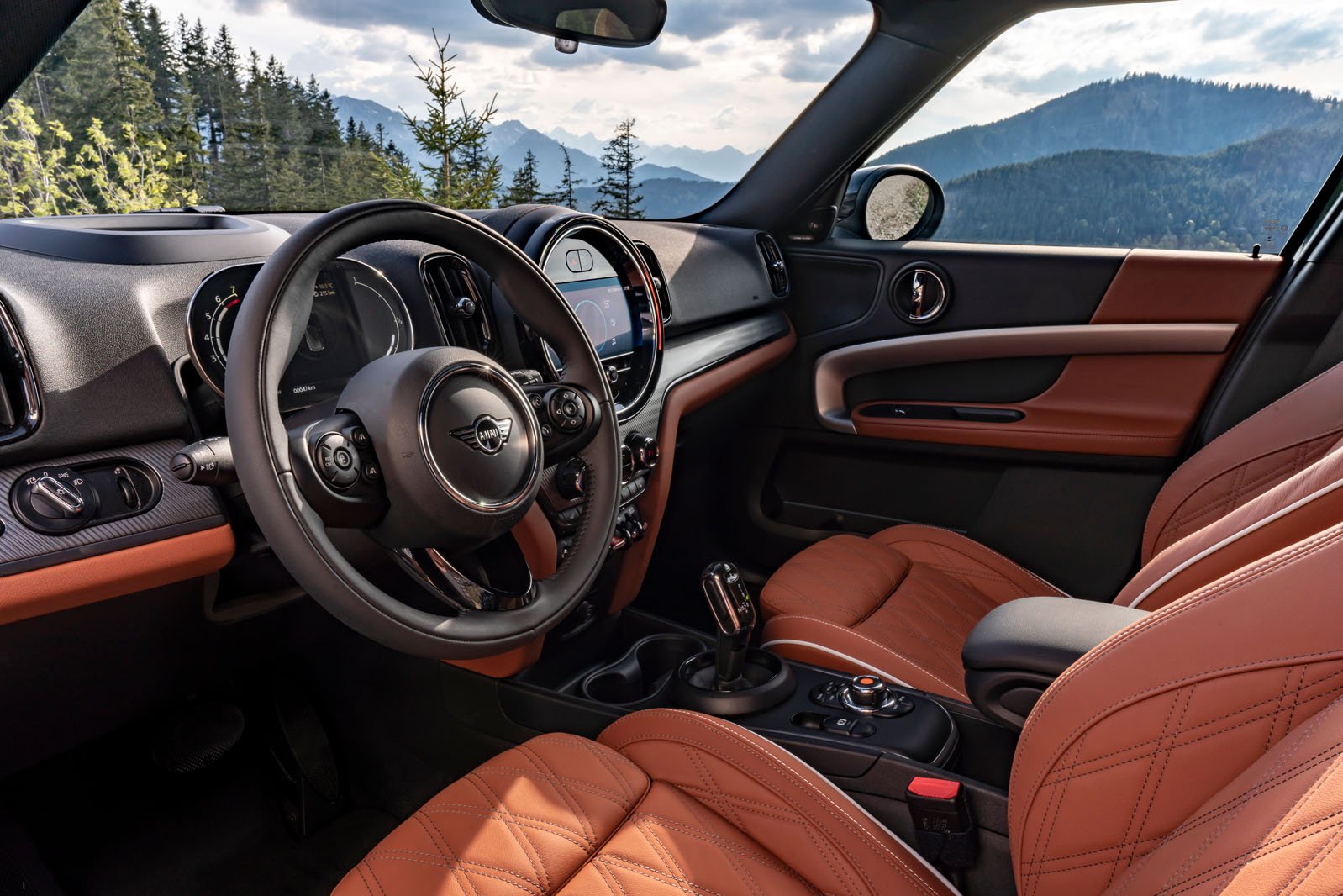 All versions of the Mini Countryman have a high-definition, 8.8in touchscreen, which you can also operate using the iDrive rotary controller between the front seats. Using the latter method while driving is far easier than looking at the screen to find the icon you want and then pressing it, and the setup plays a big part in us voting the Mini's as the best infotainment system in the class. The other reasons are that the operating system is intuitive and the software responsive.

The downside is that you get Apple CarPlay only and not Android Auto, so iPhone users can mirror their phone’s apps to the car's screen, but Android users can’t. If you add the Navigation Pack Plus you get Amazon Alexa voice control and wireless phone charging, and for audiophiles there’s the optional Harman Kardon stereo, which has more power and 12 speakers, instead of the standard system's six.

There are some well-finished cars in the class, including the Audi Q2 and Nissan Juke, but the Countryman knocks them all for six. Why? Well, the Mini makes good use of tactile soft-touch plastics around its dashboard and on the tops of its doors, and you'll only find harder, scratchier materials lower down out of sight. If you want to pay extra there are some high-grade leathers available, too, that add to the Countryman's luxury feel.

The Countryman retains Mini’s trademark toggle switches in the centre of its dashboard. As with all the switches and knobs, these feel solid to use and their bright chrome finish looks great.