* Scottish police crack credit card fraud * Staff at stations bribed up to 15,000 * Stolen card details then sold around the world... 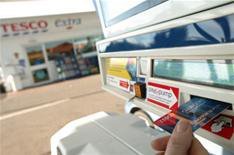 Police in Scotland have cracked a 1 million credit card scam that has been linked to fund-raising for terrorist groups.

An estimated 5000 credit cards were copied at two petrol stations in Edinburgh, while attempts to steal details from customers at a third station in Kilmarnock were foiled.

The thieves operated by bribing employees at the petrol stations up to 15,000 to fit cloning equipment to card-reading equipment.

'Someone would come along, download this information and take it away, storing it as a computer programme and sending it on as an email attachment.

'Each card's details were then downloaded onto white plastic - there are websites that sell everything you need to make credit cards.'

Harris warned that the criminals usually withdrew money in small amounts to avoid detection, taking an average of 500 before the cards were blocked by banks.