More for you |
How to spec a Peugeot 5008Can I get scrappage and Target Price discounts?Most and least reliable family SUVsThe most reliable family cars on sale - and the least2020 Toyota Hilux revealed: price, specs and release date
Home
News
2 billion drop for second-hand cars
news 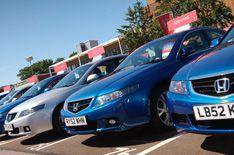 An estimated 2 billion less has been spent on second-hand cars in the past six months, according to a new survey.

A study by Sainsburys Finance suggests that 22.76bn will be spent on second-hand cars between February and August, compared with 24.87bn in the previous six months.

The dramatic fall is being blamed by residual value experts on the rising cost of fuel, the credit crisis and Government plans to backdate Vehicle Excise Duty on the most polluting cars from next year.

Worst hit will be owners of older vehicles, many of whom are in danger of finding their cars are worth little more than their scrap value.

Mark Norman, of CAP Motor Research, told The Daily Telegraph: 'We will see the true impact when people become aware that their next tax disc is going to cost them an awful lot more.

'Our research has shown that the tax disc will become as important as insurance and service costs when deciding what car to buy.'

However, industry experts believe that the biggest falls won't hit the market until later this year, when the April 1, 2009 rises in VED draw closer.