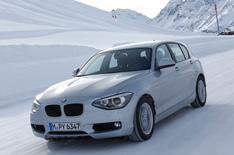 The BMW 120d xDrive is a four-wheel-drive version of the BMW 1 Series hatchback.

That might seem like an odd combination because, in the UK, BMW's saloons and hatchbacks have traditionally been rear-wheel-drive only.

In other markets around the world, though, most BMW models are also offered in four-wheel-drive form. The 1 Series was one of the few models left that wasn't, but the 120d xDrive changes that.

BMW hasn't yet confirmed whether the car will be coming to the UK, but we would be surprised if it didn't. The UK has already started to follow the rest of the world, because four-wheel-drive 3 Series models have been on sale since November 2012.

There's also the fact that the 1 Series' key rival the Audi A3 is now available with four-wheel drive. That could well be the clincher.

In normal conditions, pretty much like any other 1 Series. The xDrive has different suspension settings to the rear-drive car to compensate for the extra weight of its 4x4 system. However, the aim of these changes was to make the xDrive feel similar to the standard car, rather than to differentiate it.

The suspension remains compliant and well-controlled, so the ride stays impressively smooth at all times.

Body roll is also fairly well contained, and the steering is very responsive, if rather light. It's neither the most agile nor entertaining hatchback to drive, but there's still plenty of fun to be had.

Ordinarily, the four-wheel-drive system sends 60% of the engine's torque to the rear wheels and 40% to the fronts. When it detects wheel slippage, up to 100% of the drive can be sent to either axle. It all helps give you lots of extra traction on slippery roads.

We also put the system to the test in rather more extreme conditions on the snow of an Austrian ski resort. The system reacts impressively quickly when a wheel starts to slip, and juggles the power around effectively to keep you on the right track.

That power comes from the 2.0-litre diesel engine that's impressed in every model that BMW has ever put it in. It's not the quietest engine of its type but, with 181bhp and 280lb ft of torque, it is strong.

The 0-62mph dash is taken care of in 7.2 seconds (the same as in the rear-drive 120d), and the engine's willingness to pull strongly from low revs makes it effortlessly flexible.

Again, just like any other 1 Series. The lush materials and solid assembly give it a premium feel, and with BMW's excellent iDrive infotainment system provided as standard, the car's various functions are a doddle to use.

The cabin isn't perfect; the driving position is offset and getting into the rear seats takes some flexibility because the bulky wheelarches make the door openings rather small.

Still, there's room for four adults to travel in reasonable comfort, and a decent-sized boot.

If BMW does decide to bring the xDrive to the UK, we reckon it'll cost around £1500 more than the regular 120d, which puts the price at around £25,000 for a five-door in our favourite SE trim.

That sounds a wee bit expensive for a 1 Series, but if you like the car and live in a remote part of the country, it'll be worth considering to give you a better chance of getting around when it snows.

It's not as if having four-wheel drive will impact much on your running costs. The regular 120d has an official fuel economy figure of 62.8mpg, and the xDrive is only just behind, on 60.1mpg.

Likewise, CO2 emissions rise, but only from 119g/km to 123g/km, so company car tax bills will still be quite low.