If neither petrol nor electric takes your fancy, there’s now the Hyundai Kona Hybrid. How does it fare against the rest of the range and its small SUV rivals?... 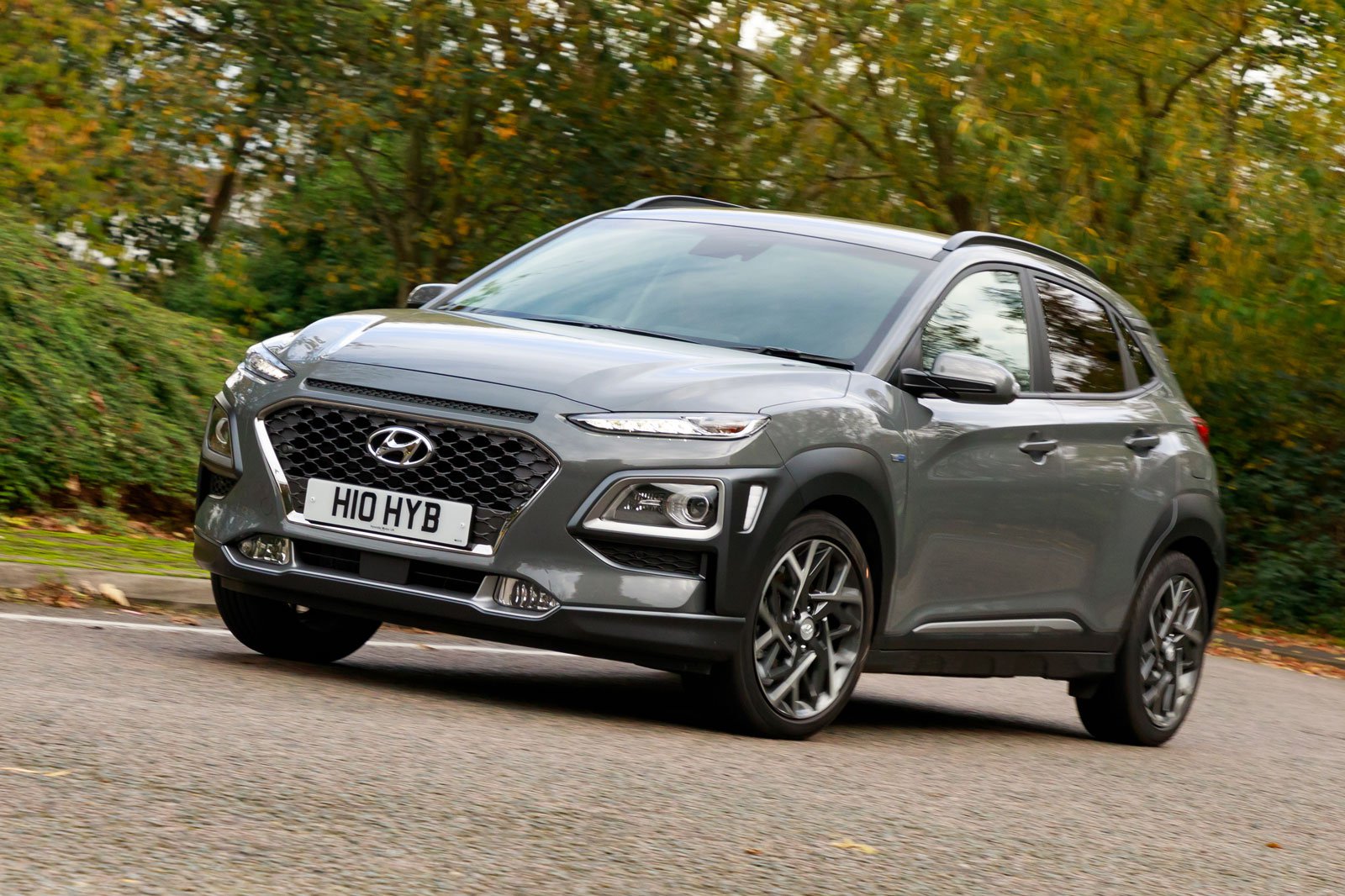 Some things are just better with a bit of voltage behind them; think pencil sharpeners and kitchen whisks, for example. And Hyundai isn't new to this concept, already offering several hybrid and electric cars (and a hydrogen fuel cell model, just to show off). So now the brand has decided to use that expertise to create the Hyundai Kona Hybrid.

Joining regular petrol-powered versions of the Kona and the impressive Kona Electric, it could be just the thing if you’re still a bit fretful about going in feet first with an electric car, but are keen to lower your running costs and environmental impact. What's more, its arrival is timely, given that Hyundai recently decommissioned the diesel Kona.

Under the skin, the Kona Hybrid shares its engine and some other parts with the Kia Niro Hybrid – one obvious rival. The Toyota C-HR is another hybrid that prospective buyers are likely to be considering. However, the Kona also fits into our small SUV class, placing it in competition with conventionally powered models such as the aforementioned Volkswagen T-Cross. Time to see how it stacks up. 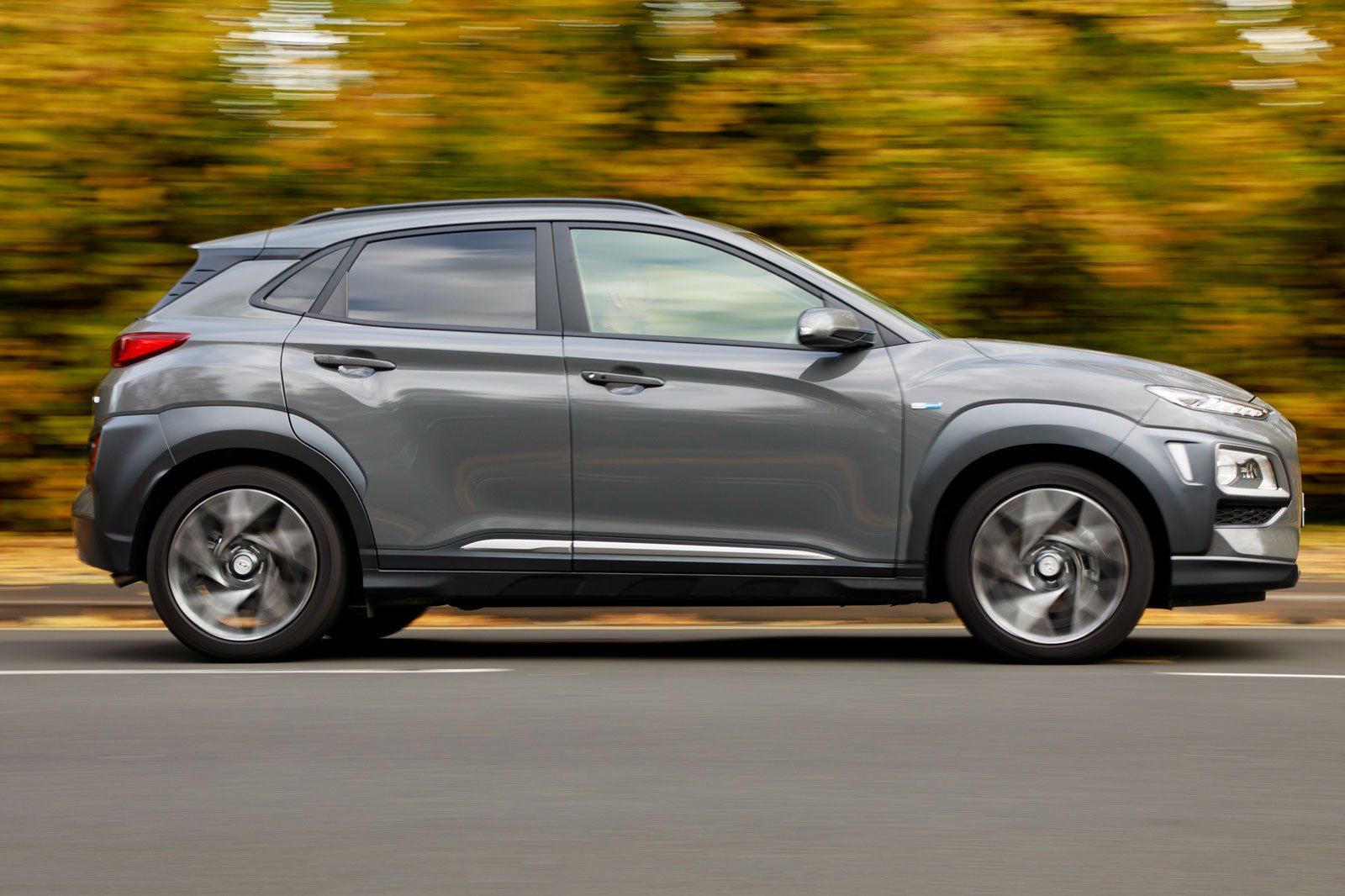 2019 Hyundai Kona Hybrid on the road

Power comes from a 104bhp 1.6-litre petrol engine and a 43bhp electric motor, resulting in a claimed 0-62mph time of 11.2sec. That might sound a bit slow – especially considering the Kona Electric will get there in 9.7sec and even the 1.0-litre petrol Kona takes 10.2sec. However, the Kona Hybrid has enough poke for the real world and performance is on par with a Toyota Prius.

There is a pleasing urgency when setting off thanks to the electric motor helping out the petrol one and, as you pick up speed, power is delivered smoothly in a linear fashion. Getting up to motorway speeds isn't the work of a moment, but acceleration is adequate. We'd also point out that you hear plenty of road roar and a fair amount of wind noise while cruising.

Instead, it's around town where the Kona Hybrid is best. When maneuvering or driving gently, it can amble along quietly on electric power alone (at least for short periods), emitting just a slight whine from its motor. Trying to keep up with traffic results in the petrol engine joining the party immediately since there's no way of locking the Kona into electric mode (you have to let the car decide when to use the battery). On the upside, it switches between power sources smoothly and is even quite helpful, using information from the sat-nav to advise you when is best to lift off and save fuel.

As a bonus, a responsive six-speed dual-clutch automatic gearbox is standard, in place of the whiny CVT 'box found in the hybrid C-HR. Still, go for a kickdown and the revs soar just like in a CVT, causing the engine to thrash away noisily. And while the Kona Hybrid isn't available with a proper manual alternative, there are paddles behind its steering wheel in case you fancy changing gears yourself.

The brakes aren't as consistent as conventionally-powered rivals. That's because, like all hybrids, the Kona recovers energy that would normally be lost when you're slowing down to recharge its battery. It only takes a couple of hours to get used to them and they are better overall than the CH-R ones for feel. You can alter the amount of energy recuperation that happens when you lift off the accelerator but we found it a bit too aggressive in it's highest setting making smooth driving near impossible.

You'll quickly get used to the braking system quirks and then you'll start to enjoy the tidy handling. That's mostly to do with the responsive steering and suspension that keeps body lean decently in check for the standards of the class. Plus, the ride is improved over the regular Kona's; you can feel smaller surface imperfections vibrating through your seat, but larger lumps and bumps unsettle the car less. Overall you hear bumps more than you feel them.

Just bear in mind that the T-Cross is still more comfortable, while we’d point you towards the Seat Arona for a really tidy-handling small SUV. 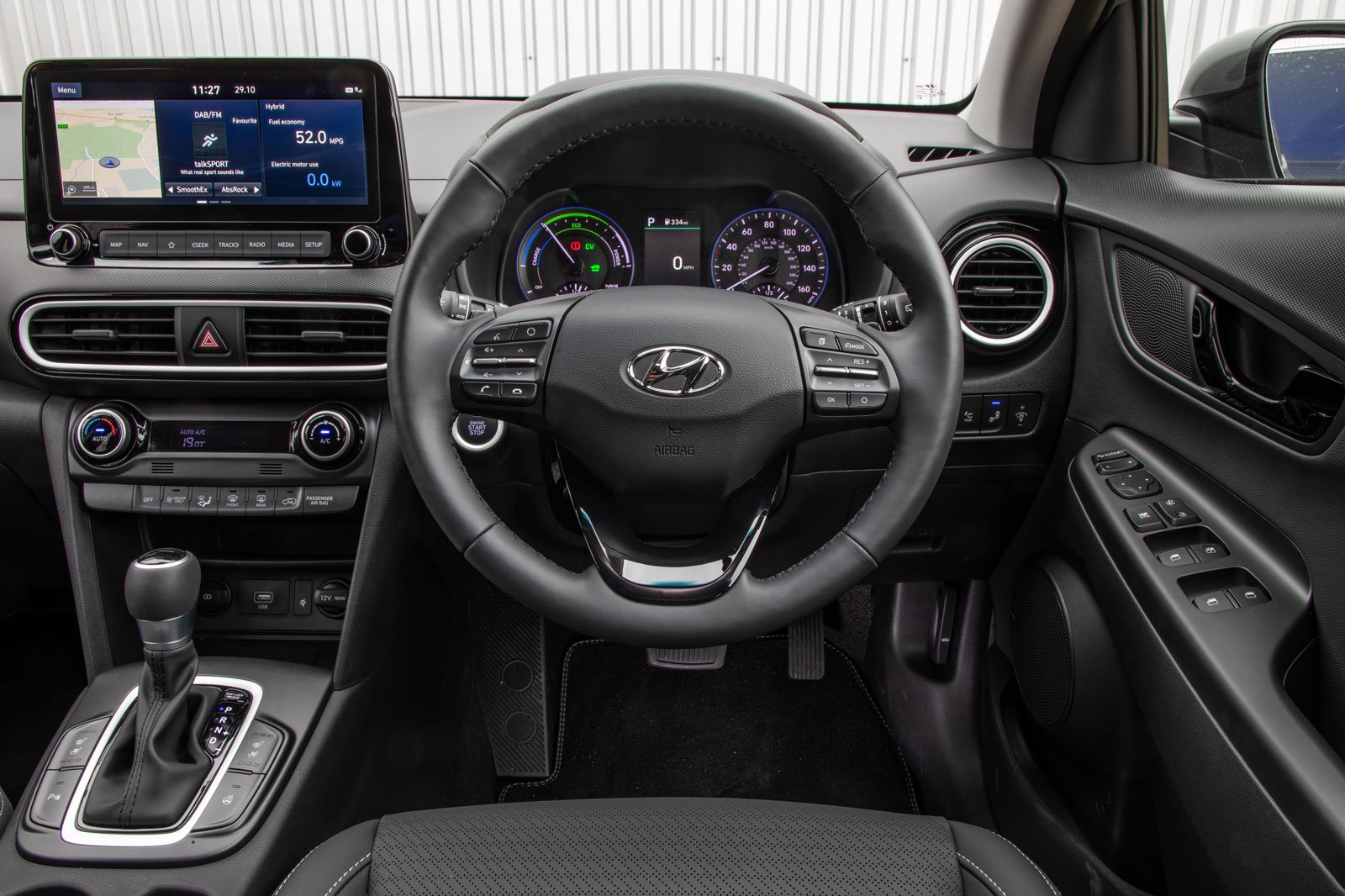 The interior isn't much different from what you get in a regular petrol Kona, meaning there's an awful lot of hard, scratchy plastic. However, smarter materials appear along the front of the dash, and Hybrid buyers can lift things further by speccing some coloured accents around the air vents and gear selector.

There’s no real change to the amount of space inside, either, because the Kona was designed from the start to accommodate batteries. But that still leaves it cramped in the back compared with the Arona and T-Cross, and, unlike the latter, you don't get sliding rear seats to let you improve boot space. In previous tests, we’ve managed to get four carry-on suitcases inside the Kona, but the T-Cross swallows five even when its rear seats are in their most rearward position. As for the CH-R, that's a bigger SUV so is unsurprisingly more spacious. 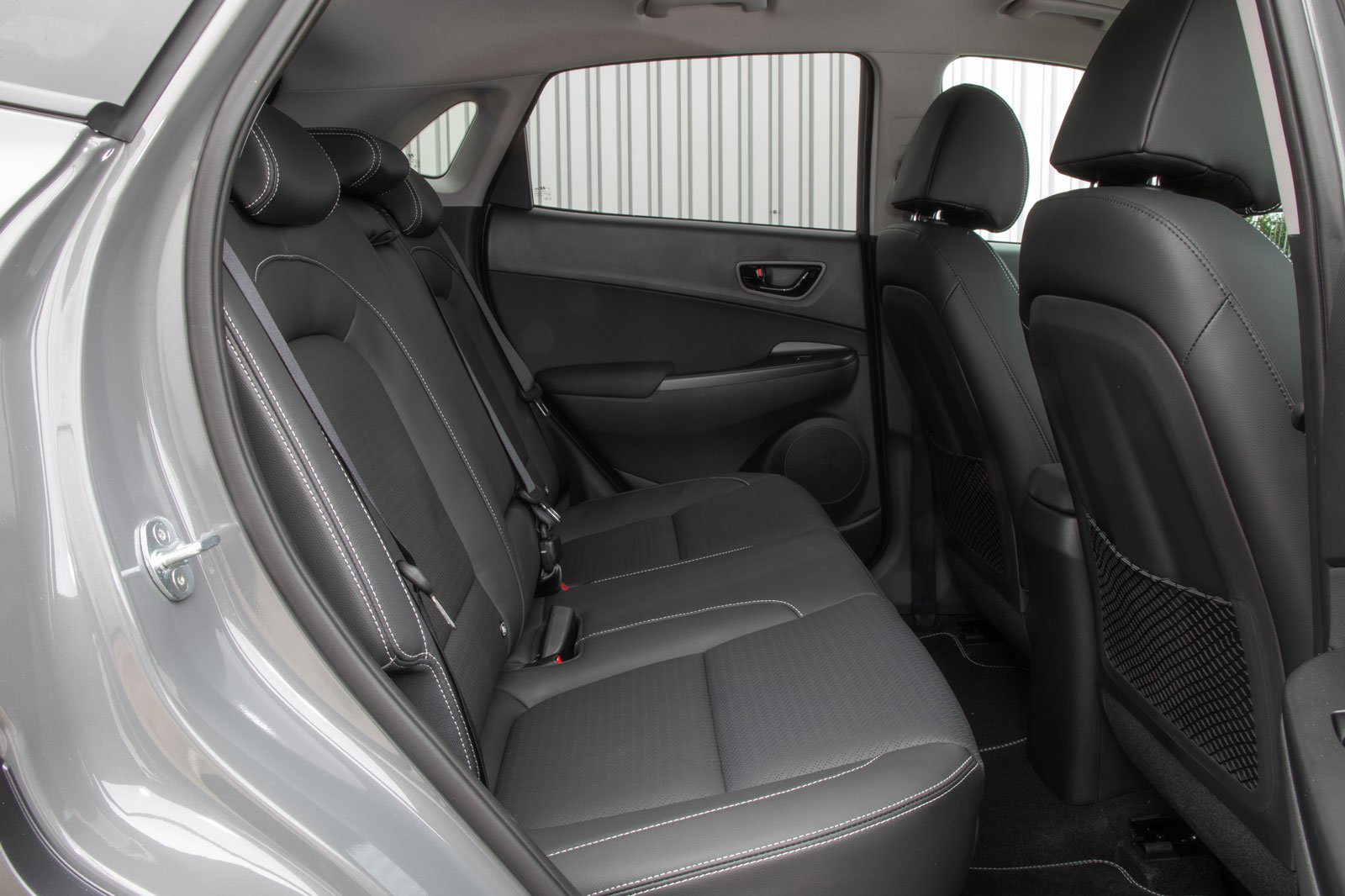 There are three trim levels on the Kona Hybrid, and even the cheapest (SE) is far from stingily equipped. It comes with cruise control, air conditioning, rear parking sensors, automatic headlights and a slightly laggy 7.0in touchscreen infotainment system.