Popular SE trim comes in at around the same money as an equivalent Volkswagen T-Cross, with the Ford Puma and Volkswagen T-Roc priced slightly higher. For a cheaper cash buy, have a look at the Kia Stonic, but Skoda's PCP finance deals are usually pretty tasty if you're paying monthly.

Officially the 1.0 TSI 95 and 110 will achieve a combined average of just under 50mpg, and the 1.5 TSI 150 isn’t far behind that. CO2 emissions are also competitive, and the more powerful petrol proves cleaner than the 1.0 TSI 95; bear that in mind if you're a company car driver looking to keep benefit-in-kind tax bills low.

That said, the Ford Puma's mild-hybrid tech generally makes it even more cost-effective to run. If you're looking at longer-term costs, resale values for the Kamiq are predicted to be solid, but not as bullet-proof as the T-Roc's.

S trim is the entry point and comes with the basics, including 16in alloy wheels, air conditioning, electric mirrors and electric windows. For something a little plusher, go for our recommendation, SE trim. That will gain you 17in alloys, an automatically dimming rear-view mirror, cruise control, auto lights and wipers, as well as some of those niceties we've mentioned already, such as rear parking sensors, front-seat lumbar adjustment, a front armrest and an 8.0in screen for the infotainment system. Think about adding a rear-view camera, a height-adjustable boot floor and the Simply Clever Pack if you can.

SE Drive adds different 17in wheels, rear privacy glass and the 9.2in touchscreen, but doesn’t do a great deal else to justify the extra money. The pricier SE L trim adds climate control, 18in alloys, power-folding door mirrors, keyless start, dynamic indicators and privacy glass although you can’t have the TSI 95 engine. The Monte Carlo trim offers a sportier look with black roof rails, ambient interior lighting and a panoramic sunroof. Overall, you get more toys for your money with a Kia Stonic, Nissan Juke or Ford Puma. 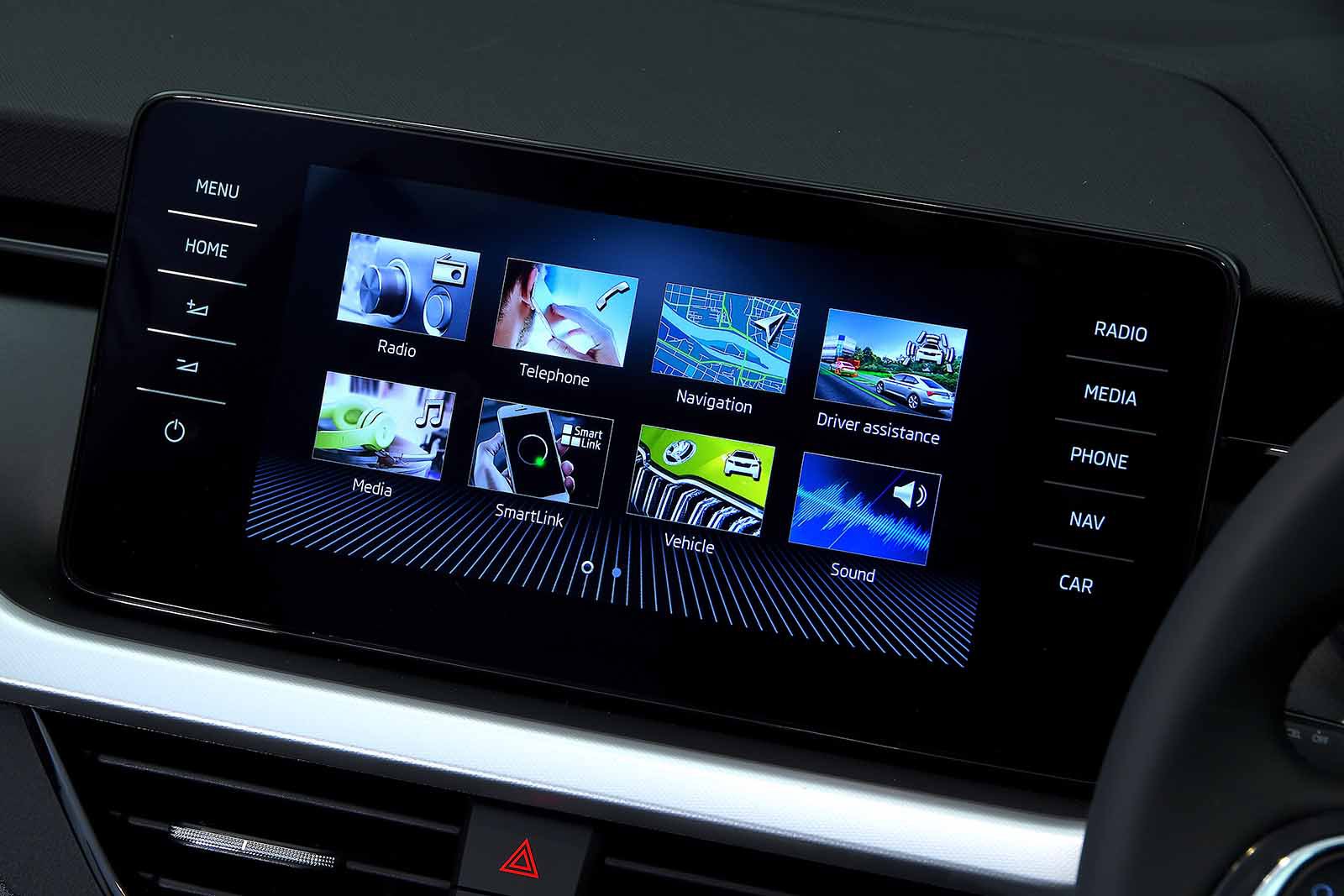 The Kamiq was too new to feature in the 2020 What Car? Reliability Survey, but Skoda as a brand came an encouraging fifth (out of 31 manufacturers) in the overall league table; that’s above both Seat and Volkswagen. Mini came even higher up the pecking order, though.

Like other Skoda models, the Kamiq has a three-year/60,000-mile warranty as standard. You can extend that up to five years for an extra fee. Meanwhile, a Renault Captur or Hyundai Kona comes with a five-year warranty for free, and a Kia Stonic tops those with seven years' cover.

Standard equipment includes lane-keeping assistance, automatic emergency braking (with pedestrian detection) and seven airbags. However, the airbag count can be raised to nine if you spec the optional driver’s kneebag and rear side airbags.

Blind spot monitoring is also available as an option, alongside Rear Traffic Alert. The latter warns you about approaching vehicles when you’re reversing out of a driveway.

When it was appraised for safety by Euro NCAP, the Kamiq proved very effective at protecting its occupants in a crash and was awarded the full five stars. It achieved higher scores for adult and pedestrian protection than the Kia Stonic, although, with a lower risk of child whiplash injury than the Kamiq, the T-Roc was deemed to be safer still.