The new Hyundai Ioniq 6 electric car is a four-door coupé, which promises a long range and ultra-fast charging. Due early in 2023, we've been to see how it's shaping up...

The internet, the steam engine and Concorde are all things that can be considered to have changed the game in one way or another and this is something Hyundai is hoping to achieve with its latest electric car, the sleek Hyundai Ioniq 6.

But what is it? Well, based on Hyundai’s 2020 Prophecy concept car, it’s a four-door coupé that offers quicker charging times and a better battery range than key rivals, including the BMW i4, Polestar 2 and Tesla Model 3.

That range point will be important for many. With its streamlined body shape that helps it slip through the air and a huge 72.6kWh (useable) battery as standard in the UK (a smaller 58kWh version won't be offered here), the Ioniq 6 has an official range of 382 miles. That beats the Polestar 2's official 341-mile capability and the Tesla Model 3 Long Range's 374 miles. 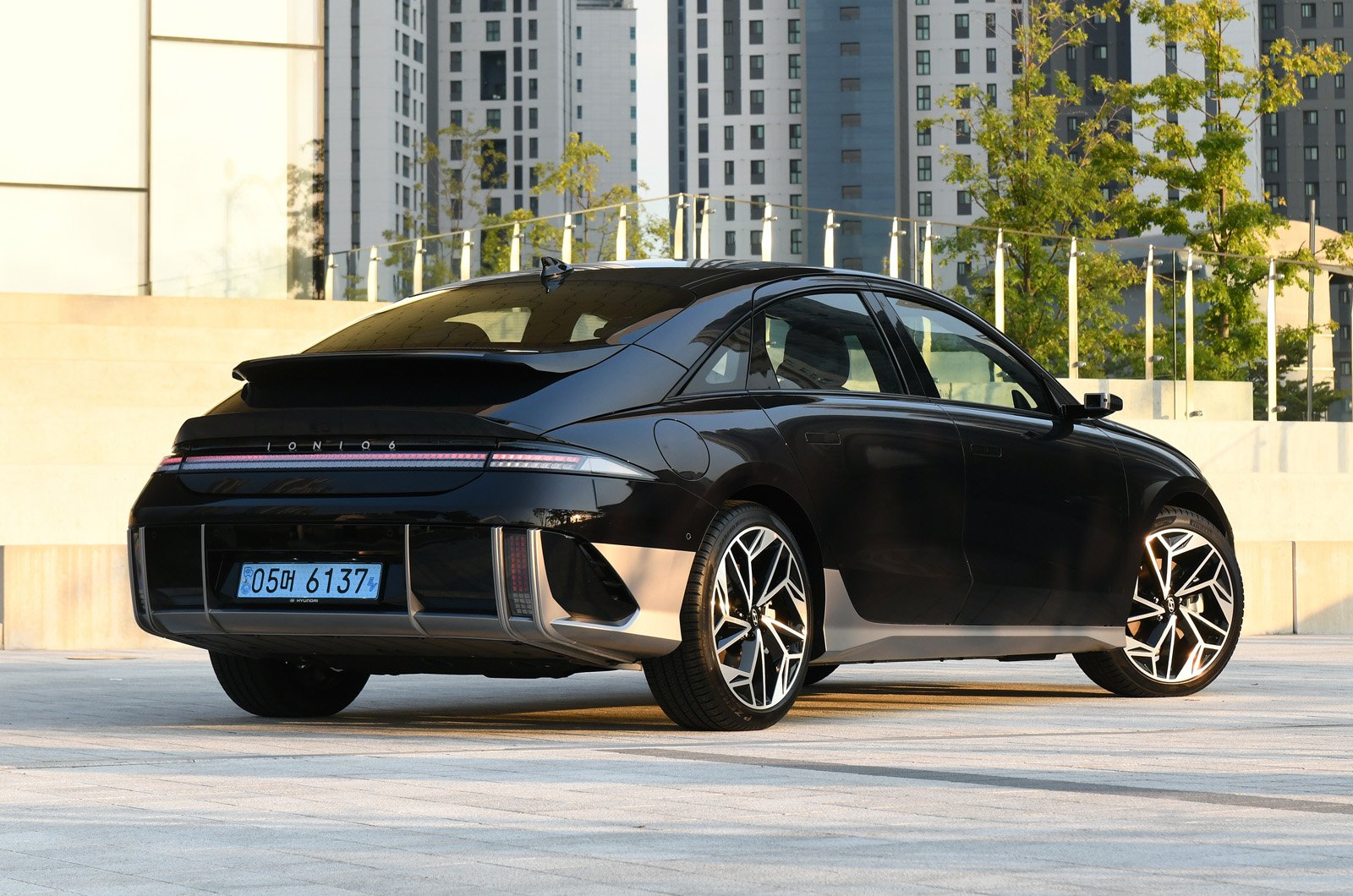 On top of that, like the Hyundai Ioniq 5, the Ioniq 6 has been equipped with ultra-fast charging to minimise your time spent at charging stations. The charging rate of up to 350kW means the Ioniq 6 can get from 10-80% charge in around 18mins.

Of course, the only issue is that there aren’t that many ultra-fast chargers around the UK and it’ll be a while until they’re as abundant as Tesla’s brilliant Supercharger network. Hopefully, by the time the Ioniq 6 arrives in the UK in early 2023, they’ll be much more common.

Hyundai hasn't set pricing for the Ioniq 6 yet, but company insiders suggest that it will be close to the equivalent Ioniq 5 model, so expect it to start from just over £45,000.

We've now driven a production version in Korea, with different suspension settings to what UK versions will get when they arrive. 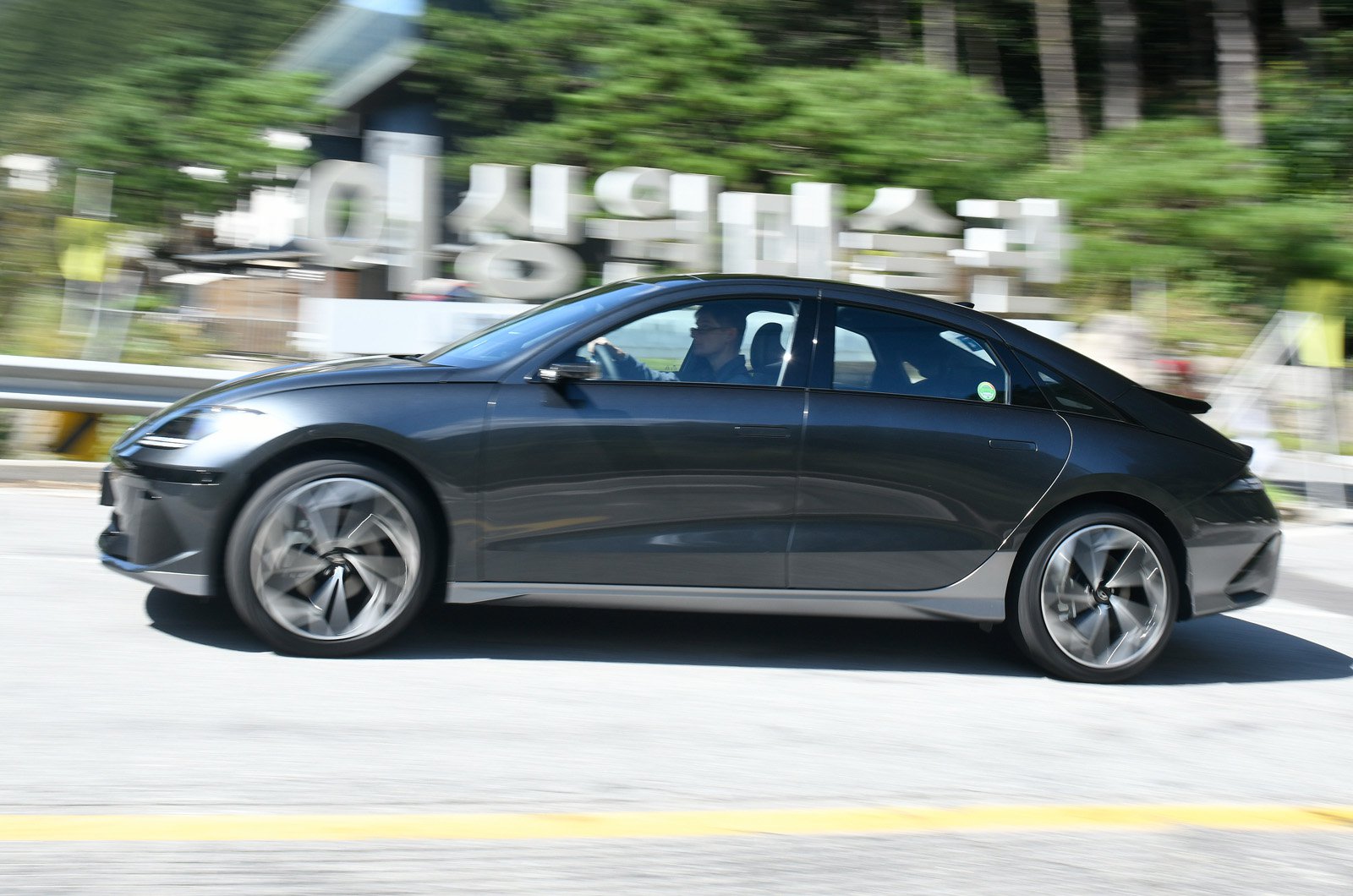 The more powerful twin motor version has an official range of 322 miles, which is still more than enough for most people. And from our experience of driving that model the range claim seems very accurate, so we anticipate that it's possible to achieve 300 miles on a charge in real-world conditions.

The twin motor version produces 329bhp, and delivers that familiar instant hit of power electric cars offer when you prod the accelerator. It's capable of achieving 0-62mph in 5.1sec, with plenty of power  available when needed. There's also an artificial 'spaceship-like' noise system for people who think EVs are too quiet, which you can set to match the speed of the car. It's a bit of fun, but we think it could grate over time.

Like the Ioniq 5 and Kia EV6, braking regeneration can be increased and decreased with paddles behind the steering wheel. The strongest iPedal setting slows you all the way down to a standstill when you come off the accelerator and allows for single pedal driving. 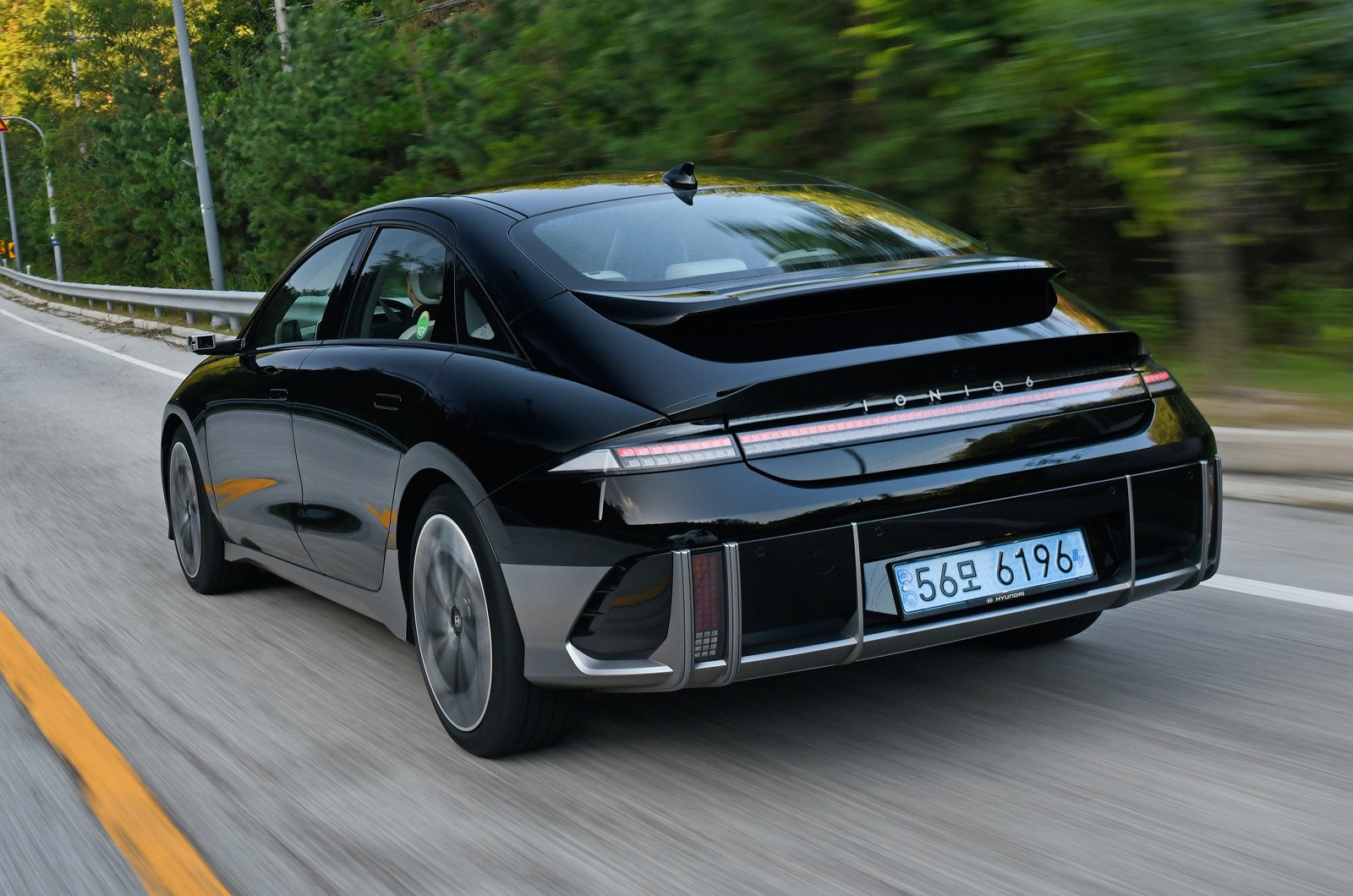 The similarities to the Ioniq 5 end when it comes to suspension. Where the Ioniq 5 is soft-riding and wafts along, the Ioniq 6 is firmer, and closer to the Model 3. It still feels smoother than the latter, though, dealing with potholes and other imperfections far better. There is a slight thud when you head through larger holes in the road, but even some truly tough bits of road and awkward speed bumps don't substantially unsettle the machine.

That firmer suspension also makes the Ioniq 6 feel different to the Ioniq 5 when you reach a winding country road. There's notably less body lean and the handling is pleasantly sharp. There are a range of drive modes to choose from that add performance or help you maximise your range, and if you delve into the settings there's a special 'EV Tune Up' mode that allows you to adjust the steering weight and accelerator pedal response to suit.

That said, while the Ioniq 6 has a particularly sporty look, at heart it's still a big, long executive saloon. The focus has clearly been on offering a refined drive and ride, and it's not quite as engaging as the Model 3 or the BMW i4, which come with adaptive suspension. 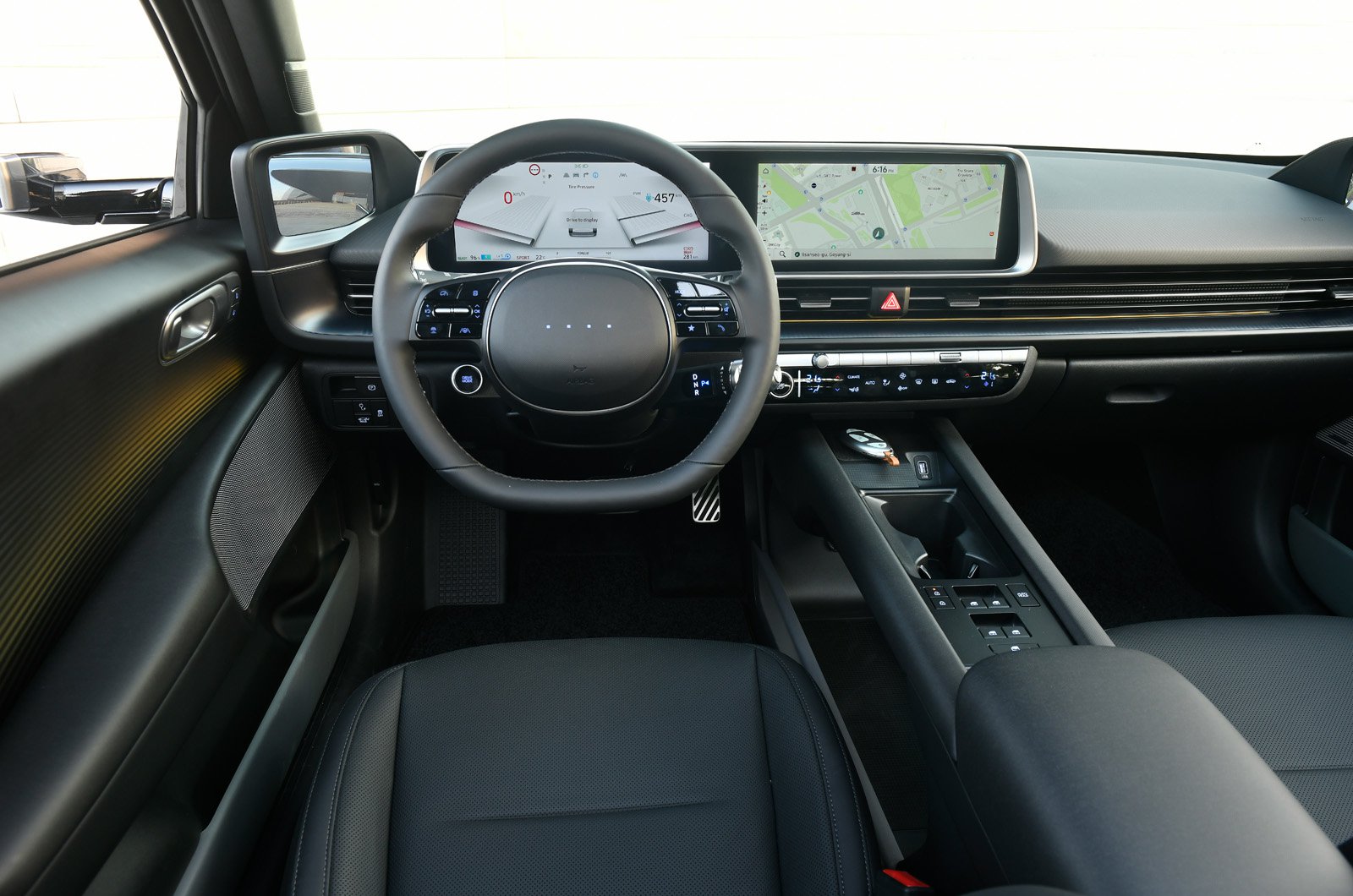 While the exterior of the Ioniq 6 is all new, the interior has far more family resemblance to the Ioniq 5. It's all very plush, with a series of small but welcome upgrades that give it a classy feel.

The dashboard is dominated by two conjoined 12.0in screens - one for the driver’s instrument panel behind the steering wheel and another one for the touchscreen infotainment system. Thankfully, there are some physical shortcut buttons below the touchscreen, helping to make it slightly less distracting than many rival systems when you’re on the move.

The equipment list includes everything you'd really want, including Apple CarPlay and Android Auto smartphone mirroring, along with built-in sat-nav and Bluetooth connectivity

There's also a new ambient lighting system, which has 4096 possible colour combinations, so you can set the interior exactly to your liking. You can also set them to flash red when the driver assistance features need to give you a warning.

The door mirrors can be replaced with optional camera ones, which feed an image onto a screen mounted on either side of the dashboard. The system is better than in some other cars we've tried, because Hyundai has placed the screens higher up to be in easier view.  It will still take some getting used to, with the lack of depth a traditional mirror gives you, but you won't get the absolute maximum battery range if you don't choose them. Despite this, we reckon they're best avoided because the difference is so small. 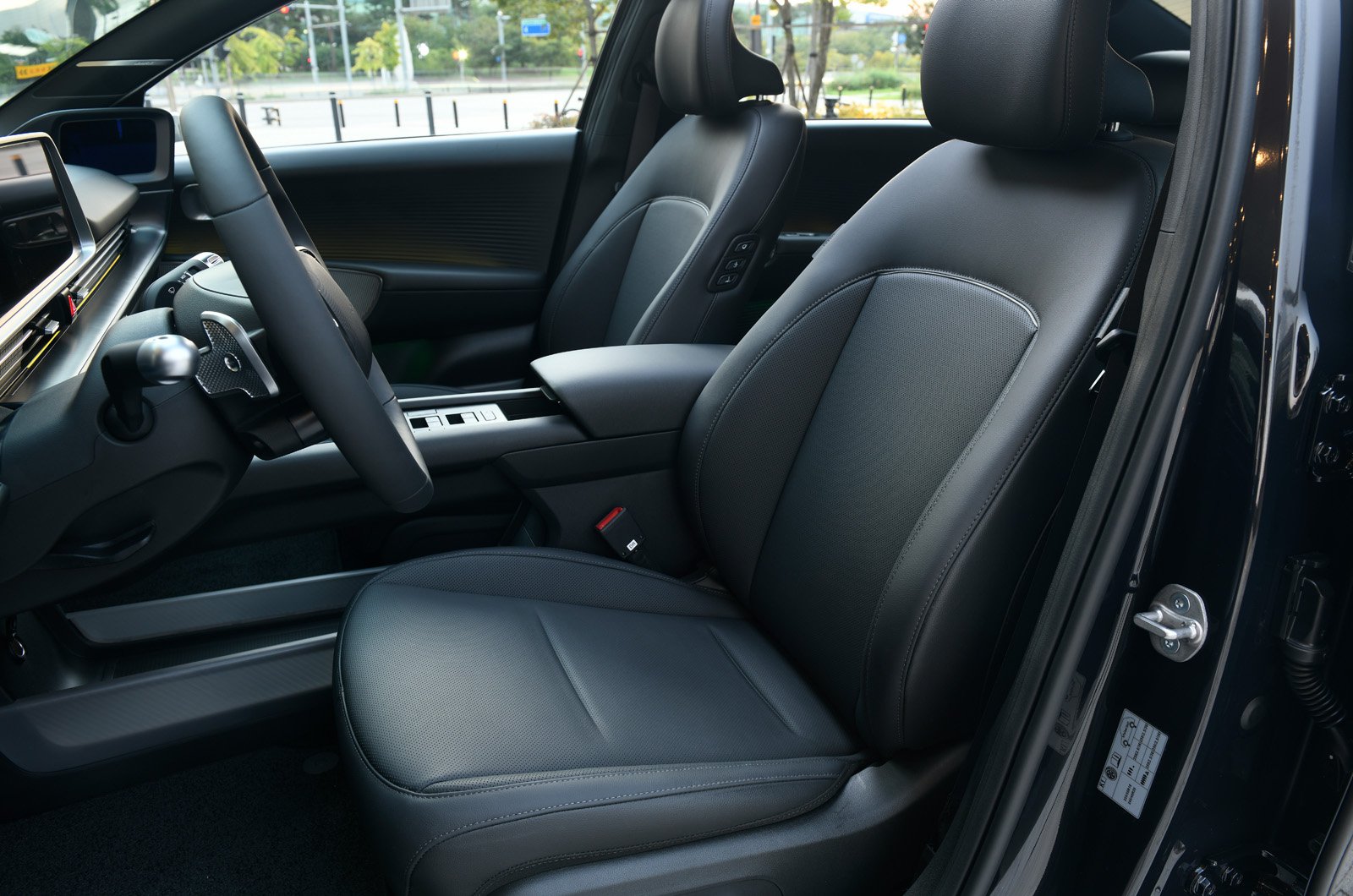 If you’re interested in the Ioniq 6, then it’s very likely that practicality is more important to you than what physical form the door mirrors are in. In that area, we have both good and bad news.

You see, front seat occupants have ample head and leg room, even if you measure north of six feet tall. It’s also plenty wide enough for both of you to rest on the central armrest without rubbing shoulders.  It’s in the rear seats where things are a bit more of a mixed bag. That’s because rear leg room is cavernous, bordering on almost ridiculous, while that sloping roofline cuts so far into the rear head room that a six footer will find their head scraping the headlining. 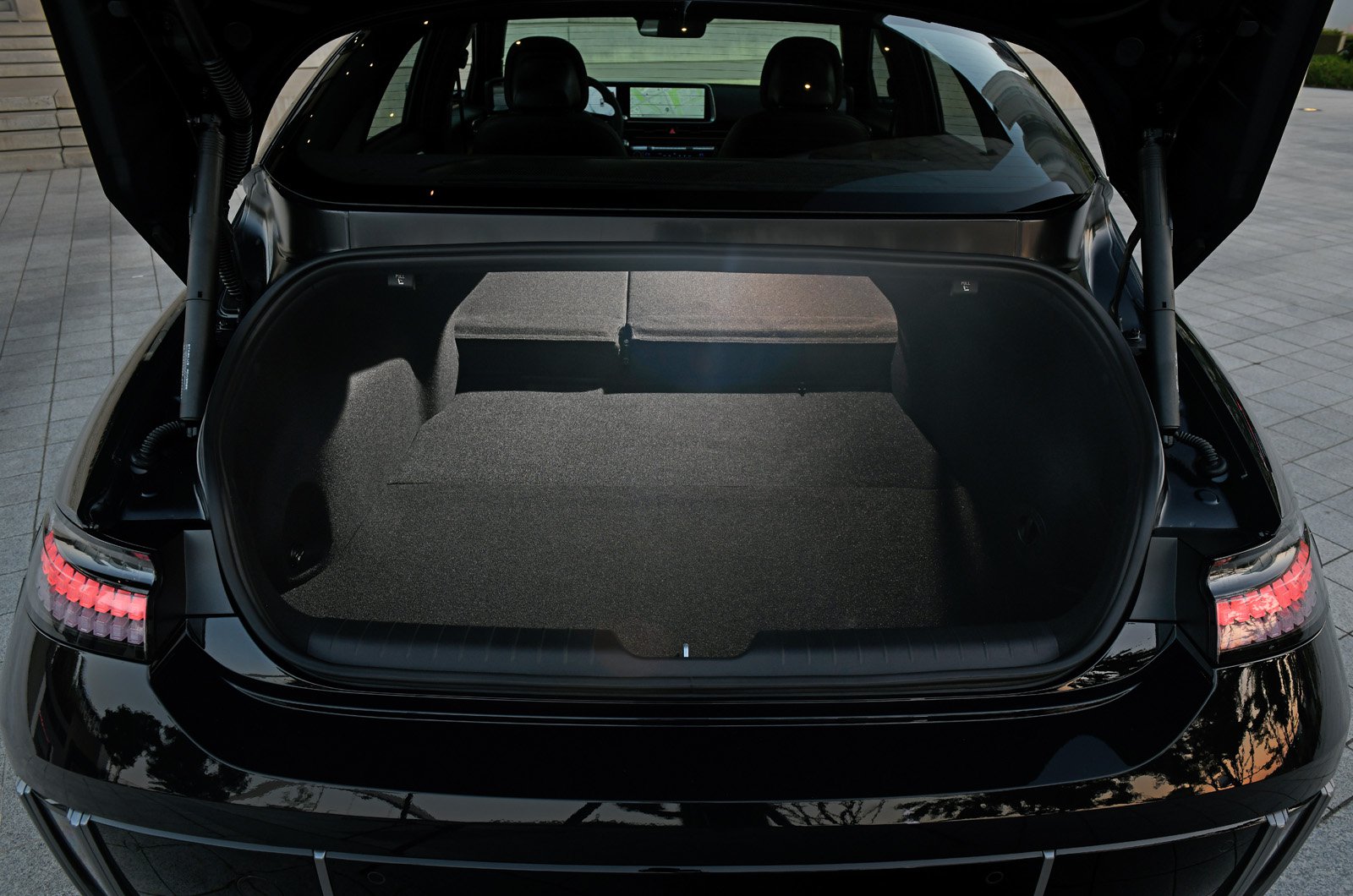 Open the boot and you’ll find that, despite the masses of rear leg room, there is a space that reaches quite far back into the car, so it should hopefully swallow long items such as golf clubs or a pushchair nicely. The problem is that the opening is rather small and the tailgate doesn't open up that high, meaning you’ll have issues loading bulkier items in.

You do, at least, get 60/40 split folding rear seats and handy levers in the boot to lower them, saving you the need to walk back to the rear doors while in the middle of wrangling something long into the boot.

Next: Hyundai Ioniq 6 verdict and specs >> 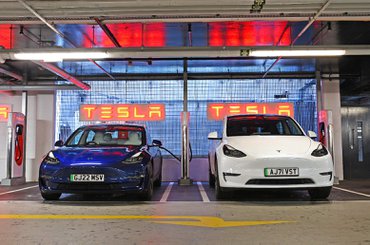