More for you |
Most and least reliable executive carsGeneva motor show 2020: all the star cars to watch out forOur best Target Price discountsComing soon: Audi A3 and Skoda OctaviaBest and worst hot hatches 2020
Home
News
Audi goes greener with new A3 engine
news 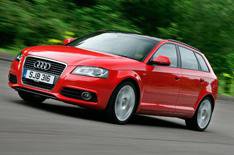 Audi has slashed the A3's carbon dioxide emissions with the introduction of a new common-rail diesel engine.

Combined with Audi's engine stop-start system, the A3's economy is boosted to an average of nearly 69mpg that's 6.1mpg better than the A3 1.9 TDIe

Carbon dioxide emissions are better, too, with the new engine emitting just 109g/km, compared with 119g/km from the old 1.9 unit.

Despite the added economy, performance remains keen - the new engine powers the A3 1.6 TDI with five-speed manual transmission to 62mph in 11.4 seconds and on to a top speed of 121mph.

Brake energy regeneration technology is also included to further improve the car's efficiency. Energy that would otherwise be lost as heat is converted and stored in the car's battery, and can then be used to reduce fuel consumption by up to 3%.

Audi has pledged to cut total CO2 emissions from its fleet by 20% within three years.