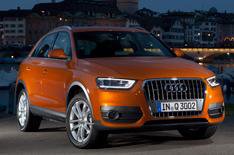 The concept car is the design basis for the Q3 compact off-roader, and is based on the current Volkswagen Golf chassis. Power comes from a 204bhp 2.0-litre turbodiesel.

The engine is fitted with a diesel particulate filter and the VW Group's Bluetec system, which injects urea into the exhaust to cut emissions of harmful nitrogen oxides. The Bluetec system enables the engine to meet Euro VI and US emissions standards, and Audi claims the car will manage nearly 48mpg on average.

The four-seat concept car will have an S Tronic transmission with automatic and manual modes - the latter will have steering wheel-mounted paddles.

Ventilation comes from a novel system - instead of conventional vents, there are 4600 holes in the fascia.