More for you |
The best 21-plate large SUV offersCitroën Berlingo long-term test reviewE10 petrol - what is it and how could it affect you? Hello to 21-plate day: The best cars you can buyNew Volkswagen ID.3 and Citroën e-C4 vs Kia e-Niro
Home
News
Audi S7 revealed
news 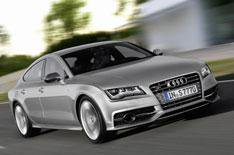 This is the Audi A7 Sportback, which will be launched at the Frankfurt motor show next month.

Like the S6 saloon and S6 Avant, the Sportback is powered by a new V8 twin-turbo 414bhp 4.0-litre TFSI engine.

The S7 comes with a seven-speed S tronic gearbox, air suspension and four-wheel-drive.

The car goes on sale later this year, although prices have yet to be announced.