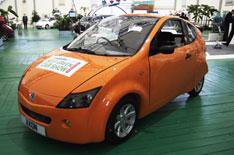 This is the Axon, a 500cc petrol-engined eco-car that can average 100mpg but still achieve a top speed of 90mph.

Launched today at the Sexy Green Car Show at the Eden Project in Cornwall, the car is the work of Northamptonshire-based company Axon Automotive.

Built from recycled carbonfibre, which is used extensively in making racing cars and aircraft, the car benefits from being both light and strong.

It has also been tested in a wind tunnel, so that its bodywork is as aerodynamically efficient as possible.

Because of this, it can utilise a two-cylinder, 500cc engine, which has 43bhp, 31lb ft of pulling power and weighs just 25kg. Built to meet Euro 5 emissions standards, it emits less than 70g/km of carbon dioxide.

Two adult passengers and two children in child car seats can fit inside. Without the children, the back end can be lifted off to convert the car into a pick-up, maximising the number of ways it can be used.

The car is priced at 10,900 and is available to order now, but the first production version won't be available until 2010.

Just in case you're put off by the lurid orange colour scheme, the car on display is an early concept version of the Axon, and you will be able to specify something a little less garish.

Likewise, the car seat covers will remain optional - made of recycled denim jeans and pin-stripe suits, they're unlikely to be to everyone's taste.