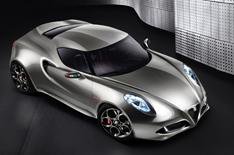 Around for a while in concept car form, Alfas rear-wheel-drive coup will finally go on sale in early 2013.

The production version is expected to be virtually unchanged from the concept car and will combines materials and technology from the 8C Competizione supercar, such as carbon and aluminium.

Alfa Romeo has confirmed that the car will have a turbocharged petrol engine with more than 200bhp. Coupled with an expected weight of around 850kg that should give performance befitting its compact supercar' tag, with a 0-60mph time of less than five seconds.

BMW is expected to introduce the 4 Series name for the coup and convertible versions of the new 3 Series. Therell be chassis tweaks, and the convertible is expected to have a folding metal roof.
Mazda MX-5
What is it? All-new version of iconic roadster
Price from 19,000 (est)

The next MX-5 due in late 2013 will stay faithful to its simple roots. Power will come from a 1.5-litre turbocharged engine, and high-tech materials will reduce weight noticeably.
Vauxhall Coup
What is it? Hard-top version of new Astra-based convertible
Price from 22,000 (est)

Vauxhall is planning to develop a coup model from the Astra-based convertible due in 2013. Its likely to share the same interior, front-end styling and engine range. A name has yet to be confirmed.