Detroit: survival of the fittest 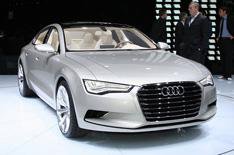 The focus at the Detroit motor show was always going to be more on the world's troubled economic situation and the plight of America's 'big three' car makers than the products on display.

Highlights
However, there were plenty of launches that did re-focus the attention on the cars and generate plenty of excitement - even though, without exception, every display and stand was more conservative than in many a year.

Highlights included the Audi Sportback concept, which looked stunning, and the VW Concept Blue Sport, which looked so good that it could make VW executives say, 'Recession, what recession?' if only it were in showrooms now.

The Mercedes E-Class was impressive in a solid, if not startling, sort of way, too - and underlined that the strongest showings were coming from the German manufacturers.

Hybrid conundrum
Perhaps the biggest crowd of the show gathered for the launch of the new Toyota Prius, which must deliver real-world economy to its buyers if it is to win its battle with the Honda Insight, which looks just as appealing, but which will be much cheaper.

The presence of the two hybrids also emphasised another problem that is going to bubble to the surface very soon. In this economic climate, how many people are actually going to be prepared to pay more to go green?

Sure, every car maker is investing heavily in technology to lower emissions, not least because there is significant government pressure to do so, but who will buy the products, which inevitably will be more expensive than cars powered by traditional combustion engines?

As General Motors Vice President Bob Lutz put it: 'When fuel prices are low, the public is not willing to pay for fuel-saving technology. At some point the people who make the rules are going to have to recognise that fact.'

The 'big three'
As for the plight of Chrysler, Ford and GM, the over-riding feeling was the term 'big three' is misleading, because it lumps them altogether.

Ford seems the most resilient of the trio, having turned down any Government bail-out cash and presenting a portfolio of products that seem to fit the market.

GM, too, projected a healthy outlook as it presented its array of concept and production cars coming to the market in the years ahead.

However, ever-more does seem to hinge on the Chevrolet Volt, which is coming to sale at the end of 2010, and its Voltec powertrain, which will be applied to other cars.

Chrysler, in contrast, appeared every bit the struggling car maker that it is. The two EV concepts it unveiled were nothing more than variants on a tried and tested theme, and only the good-looking Chrysler 200C concept car saved them from looking like a company that has run out of ideas.

Detroit 2009 was billed as a pivotal show - a chance to gauge where the motor industry is heading in these troubled times.

The evidence suggests there will be few winners, many survivors and one or two casualties.