More for you |
Every 5-star car on What Car?Used test: Maserati Levante vs Porsche MacanNew issue of What Car? magazine on sale nowMost and least reliable small SUVsRevealed: the car makers whose discounts have got bigger since lockdown
Home
News
Evoque 'won't get face-lift'
news

* New approach instead of mid-life refresh * Fresh trims and features instead of restyling * Cabrio has been put on hold for now... 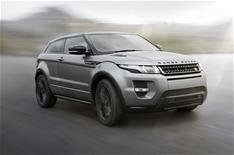 The Range Rover Evoque will get regular updates and new trims to keep it fresh instead of a traditional mid-life face-lift, according to Land Rover's design boss.

The Evoque has been a huge hit since it was launched 18 months ago; more than 160,000 have been sold, with 109,000 of those in 2012 alone. The car's image and desirability have been two of its key selling points, making it a tougher challenge than usual to restyle it. Most car manufacturers give models a face-lift after about three-and-a-half years, and replace them outright every seven years.

However, Land Rover design director Gerry McGovern has told What Car? that the Evoque's image means that a new approach to face-lifts could be required. 'With the Evoque in particular I don't want to be in a position where I change the front end for the sake of it,' he said. 'In fact, if I were to do that then it could end up looking incongruous.

'We do need to keep the car fresh, but I think that the Evoque's particular design has longevity because of its distinctiveness. There are ways in which we can offer different versions, finishes, power outputs, colours, textures, improvements in craftsmanship and quality as we go on. There will be gains in technology and efficiency that can be offered, too [such as the nine-speed automatic transmission that will replace the current six-speed later this year].'

McGovern also stated that elements of the new face-lift policy could be extended to models beyond the Evoque. He also confirmed that other derivatives of the car are on the way, but admitted that the convertible version previewed by a concept car at the 2012 Geneva motor show is unlikely to make production any time soon. 'We showed the Evoque cabrio, which is a great tool to have,' he said, 'but from a business standpoint we're better doing something else first.'