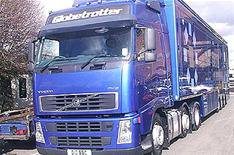 Truck and lorry hauliers are protesting in London against the rising cost of fuel.

Over 300 drivers are reported to be heading for Westminster, saying soaring fuel costs are crippling their businesses and are demanding a 25p-in-the-pound tax rebate on diesel.

The protest coincides with a debate in Parliament on Chancellor Alastair Darling's controversial planned increase in vehicle excise duty on cars.

Hauliers say they face fuel bills of up to 1000 per week for a typical articulated lorry. The average diesel price is currently 132.3p a litre.

Previous demonstrations in May were not endorsed by the Road Haulage Association (RHA), but this time the organisation is joining in the action, claiming the entire UK economy is at risk from rising fuel costs.

The RHA's national chairman, Andy Boyle, said: 'If ever there was proof that ours is an industry in crisis, then this surely must be it. The harsh reality is that the price of fuel is now forcing many hauliers out of business'.