More for you |
Used Ford Fiesta long-term test reviewWhat can I do about a security issue on my car? Best cars for less than £250 per monthWhy is my new car’s fuel economy so poor?Top 10 used electric cars
Home
News
Higher gear, higher MPG
news 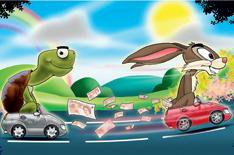 Use top gear whenever possible. Potential fuel savings are huge: use sixth gear at 40mph and you'll save about 20% compared with fourth.

You might be surprised how early you should change up for efficiency. In a family car like the VW Passat 1.8 TSI, you should be in sixth by 40mph.

Some BMWs and cars like the Audi A3 1.9 TDIe have built-in gearshift indicators to help you maximise fuel efficiency.

If you spend a lot of time cruising on the motorway, look for a car with a 'high' top gear (its engine will be turning more slowly than a car with a lower top gear at the same speed).

However, our test shows the Freelander actually uses less fuel above 60mph, and it's all down to the Freelander's long sixth gear, compared with the Qashqai's shorter fifth.

The slow speeds and stop-start nature of town driving make saving fuel trickier. Here it's all about pulling away slowly and smoothly, changing up early and anticipating road conditions ahead to maintain momentum.