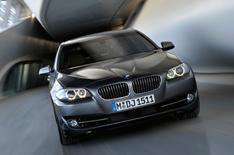 This is the first sight of the new 5 Series that BMW hopes will reclaim the executive car crown from the Jaguar XF.

BMW's new 5 Series will go on sale in March next year, with prices starting at a little more than 28,000 accompanied by claims from design chief Adrian van Hooydonk that 'This is all the BMW you'll ever need'.

Engine stop-start system on the way
Among the brand new features on this, the sixth-generation Five will be stop-start technology, an eight-speed automatic transmission and double-wishbone front suspension. On top of that, BMW also claims that the car has the largest cabin in its class, with an extra 13mm of rear legroom over the previous 5 Series.

The new Five is based on the same platform as the 7 Series luxury car and the 5 Series Gran Turismo, and it inherits various features from them, including Black Panel Technology. This integrates many of the displays into the centre console, and means they are invisible when not needed.

More efficient engines
Initially, there will be a choice of three diesel and four petrol engines, all with better economy and emissions than those in the outgoing car. The 520d will have engine stop-start it should arrive in early summer, a few months after the rest of the range. This is expected to be the top-seller, with the promise of 56.5mpg average economy and CO2 emissions of just 132g/km figures that better those of its Audi, Jaguar and Mercedes-Benz rivals.

The stop-start technology will eventually be available on models with six-cylinder engines and automatic gearboxes. However, even before then, every new Five will feature some form of Efficient Dynamics technology.

All models have low-friction tyres and Brake Energy Regeneration (which recharges the battery on the over-run), while Active Aerodynamics close the air-cooling flaps behind the grille to improve the car's aerodynamics. All cars with a manual gearbox also have a gearchange indicator to advise drivers when the most economical time to change gear is.