A monstrous 3.0-litre engine and rear-wheel drive. Surely a recipe for big thrills?

The most powerful of our contenders and the only one with four-wheel drive.

Front-wheel-drive newcomer is down on power but also weighs less than its rivals.

Hot hatches are supposed to be about cheap thrills, aren’t they? That’s what made the original VW Golf GTI and Peugeot 205 GTI such massive hits: the fact that you could have a bigger engine and sharper handling for only a few thousand quid more than you’d pay for the sort of humdrum hatchback your mum might potter around in.

Well, while you can still get a decent hot hatch for well under £20,000, access to the pointy end of the market will now cost you at least £30,000. Not exactly ‘cheap’, then. But when you consider the near-170mph exotica that fall into the hot hatch bracket these days, suddenly that sort of money doesn’t seem so unreasonable.

The newest and undoubtedly flashiest offering is the Honda Civic Type R. Complete with steroidal wheel arches and a humongous tea tray rear spoiler, shy and retiring it most certainly is not. But Honda is adamant: none of this is just for show. It’s designed to suck the car to the ground and help you go around corners at neck-snapping speeds. The Ford Focus RS takes a more route one approach: brute force, as opposed to clever Formula 1- inspired aerodynamic trickery. Its engine packs so much power that it needs to be fed to all four wheels to keep things manageable, and those cannon-sized exhausts at the back are distinctly unsubtle clues to how much noise it makes.

Sacrifice a couple of doors, haggle hard and, believe it or not, you can have the range-topping BMW 1 Series for less cash than you’d pay for either blue-collar rival. The M140i’s monstrous 3.0-litre engine pumps out almost as much power as the Ford’s and has a traditional rear-wheel drive sports car layout that promises similar thrills to BMW’s proper M cars for a lot less cash. No wonder it’s been our favourite money-no object hot hatch for the past three years. But will it stay that way?

You could argue that it isn’t particularly relevant as a performance benchmark but, when it comes to one-upmanship down the pub, the truth is that 0-60mph times still matter – and the M140i wins this battle easily. It rattled off the sprint in just 4.5sec in our dry-weather tests, and even the most ham-fisted driver could match that figure.

All you do is tap a couple of buttons, press the brake pedal, floor the accelerator, wait until you see ‘launch control active’ flash up on the dashboard and then release the brakes. You’re pinned back in your seat, the quick-shifting eight-speed automatic gearbox does its thing and 60mph comes and goes before you know it. It may be simple, but it’s still incredibly intoxicating. 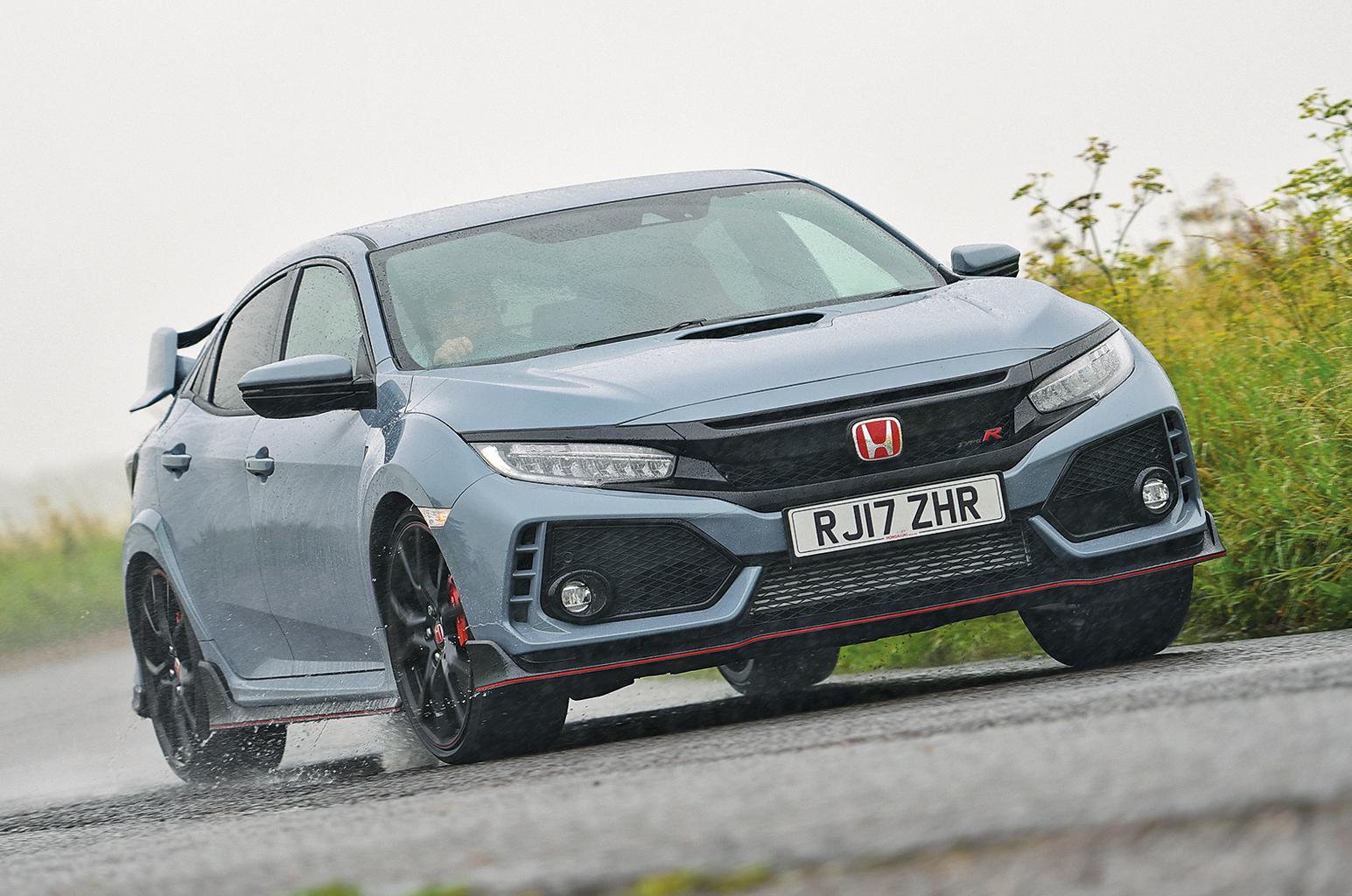 The Focus has four-wheel drive in its arsenal, so it managed to slingshot itself away from the line even more brutally, outpacing the M140i to 30mph. By 40mph, its lead had been wiped out, but the Focus still managed 60mph in a blistering 4.8sec. And, apart from changing gear quickly, you don’t need any real talent to experience this, either, because there’s a clever launch control system, similar to the one in the M140i, that allows you to make the perfect getaway each and every time.

And the Civic? Well, this sort of battle isn’t its forte. Not only is it the least powerful of our trio, but it also relies solely on its front wheels to claw its way off the line – not ideal because when you accelerate hard, the front of the car becomes light and the weight shifts rearward, making it even harder for the tyres to transfer power to the road. We managed 0-60mph in 5.5sec, but that time requires delicate and precise use of the accelerator and clutch pedals. Adopt a more bullish approach and the front wheels will spin manically and you’ll sit there, barely moving in a cloud of smoke.

Once you’re rolling, though, the Civic doesn’t feel that much slower than its rivals. Sure, its 2.0-litre turbocharged engine doesn’t have quite the same low-rev muscle as the Focus’s bigger 2.3-litre turbo or, in particular, the M140i’s 3.0-litre turbo, but it’s the most willing to rev and really benefits from being ragged to its 7000rpm redline. The Focus and M140i are so strong lower down in their rev ranges that there isn’t much benefit to be had from thrashing them.

There’s also a real joy to using the Civic’s perfectly positioned gear lever; swapping cogs requires the merest flick of your wrist and you’re in the next gear instinctively. The Focus has a jolly good gearchange by the standards of most hot hatches, too, even if its clutch is on the heavy side. Meanwhile, our chosen M140i’s automatic gearbox allows you to change gear manually by pulling paddles behind the steering wheel and it responds quickly – particularly when upshifting. A proper manual gearbox is available (and will save you £1600), but it’s rather notchy, so the auto is well worth the extra. 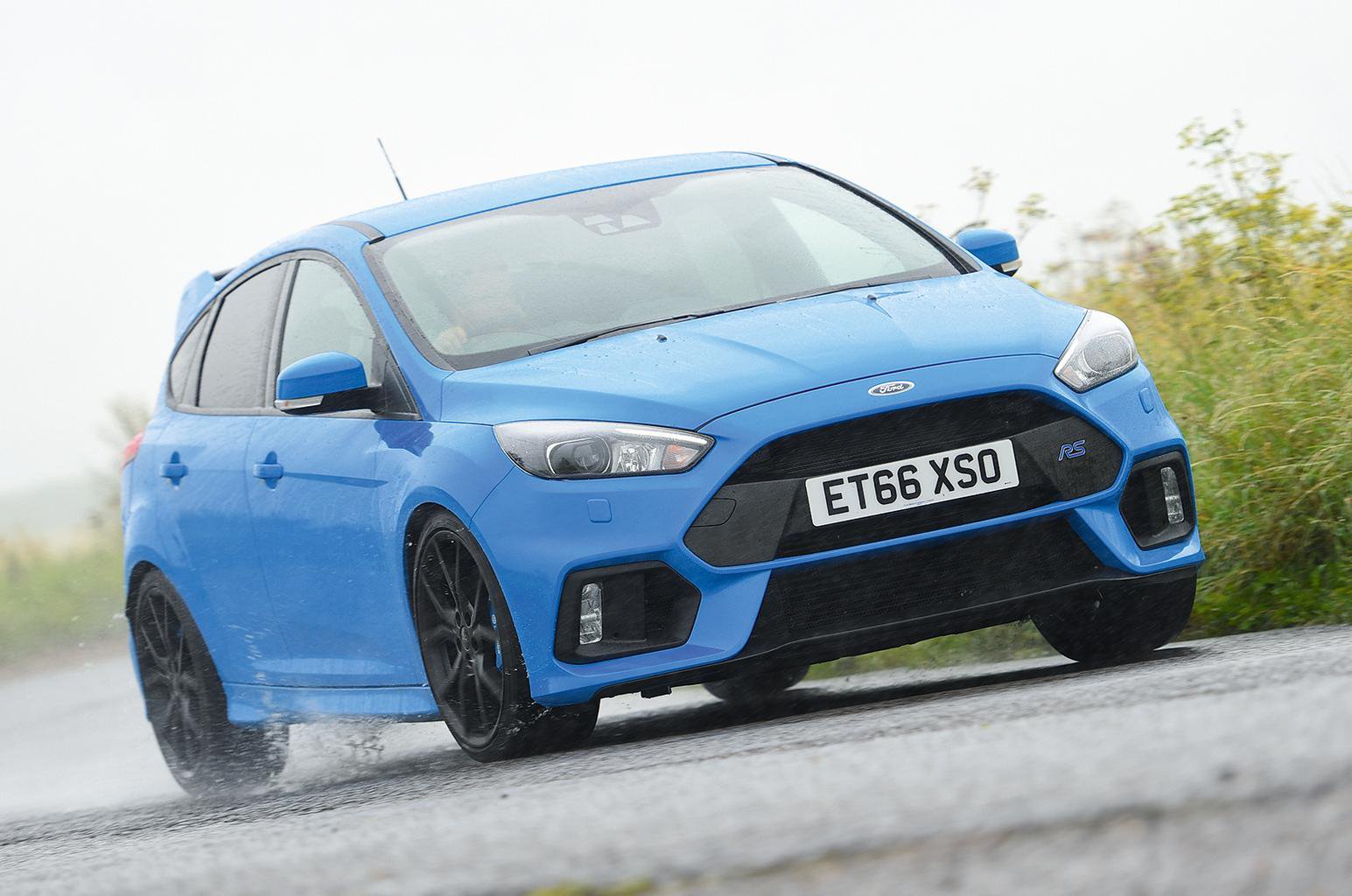 We only wish the Civic’s engine was a bit more tuneful. It’s loud, yes, purposeful even, but it doesn’t howl soulfully like the M140i when you put your foot down, nor bark, pop and bang angrily like the rebellious and antisocial Focus.

Our 0.9-mile test track is designed to simulate a fast, sinewy British B-road, giving an objective benchmark to find out which of our contenders has the highest handling limits. Despite its power deficit, the Civic actually lapped quickest, crossing the line nearly half a second ahead of the Focus. Its secret is staying incredibly composed and balanced through high-speed corners. Unlike most front-wheel-drive cars, the Civic can also claw its way out of slow bends remarkably effectively, thanks to a clever limited-slip differential, which distributes power to whichever front wheel can cope with it best.

Driving the Focus hard is an altogether more physical experience. It grips just as hard as the Civic and you don’t need to be quite as delicate with the controls to corner quickly, because the four-wheel drive system automatically shuffles power between the front and rear wheels to keep you balanced through bends. However, the Focus isn’t quite as stable as the Civic under hard braking, is more troubled by mid-corner bumps and potholes, and often tries to follow cambers in the road as if it’s possessed.

Mind you, on the right road (a smooth one), you’ll have even more fun in the Focus than the Civic; it’s that bit more playful and its steering streams more feedback to your fingertips. The Civic’s steering is impossible to fault for accuracy but, in Sport and +R mode, it’s too heavy – almost as though there’s someone on the other side of the wheel trying to turn it the other way. The weighting in Comfort mode is spot on, but choose that and you’re forced to have the suspension and engine response in their most relaxed settings – not what you want for fast driving. 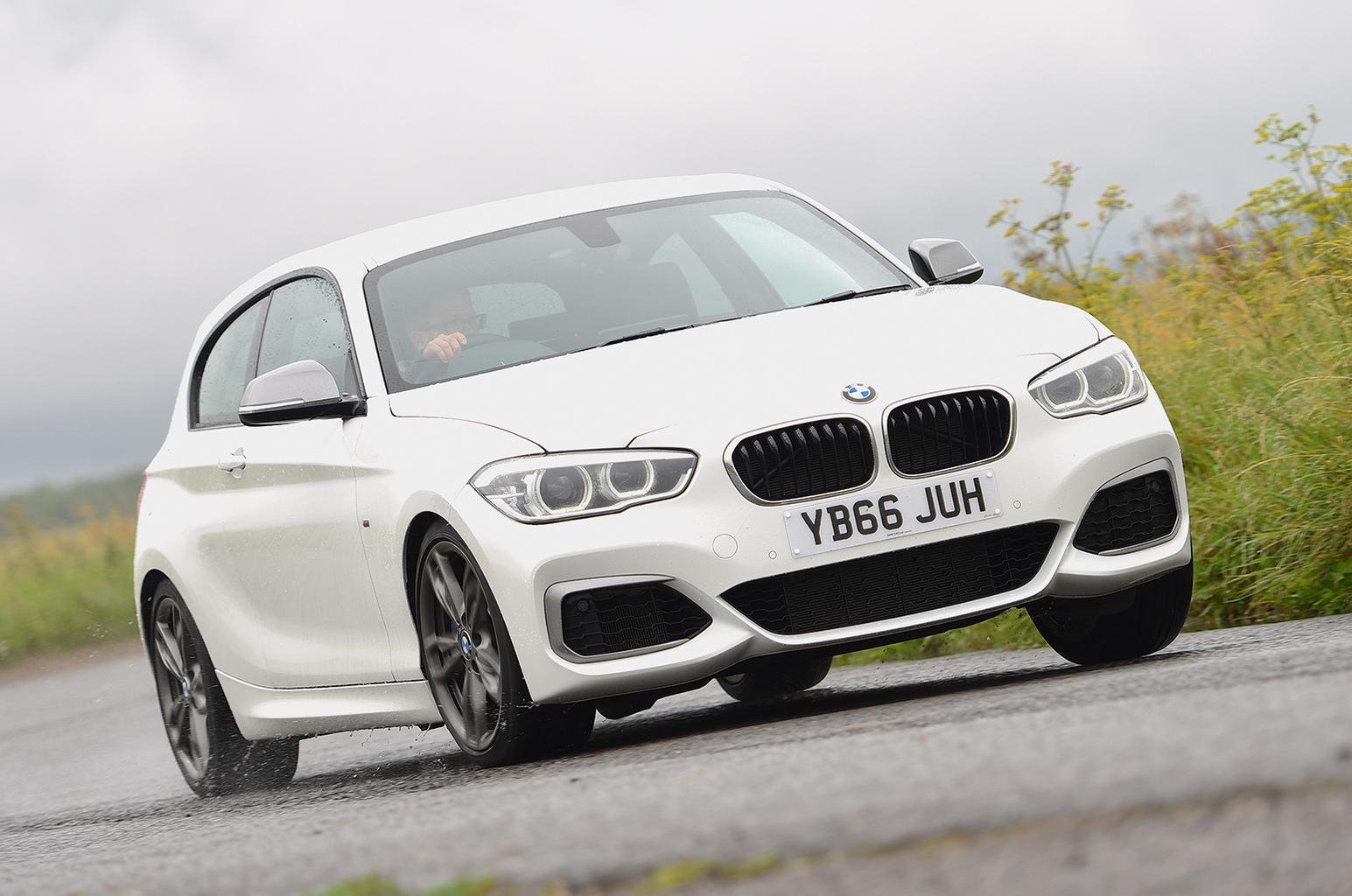 The M140i, drag race champion though it may be, couldn’t keep up with its stiffer, more focused rivals through the tighter twists and fast direction changes on our test track. It consistently lapped a second slower than the Civic, proving the old adage that power is nothing without control. It leans the most and the absence of four-wheel drive or a fancy limited-slip differential means you struggle to use more than half acceleration until the front wheels are pointing straight. It’s still a good giggle, though, despite having the numbest steering of the three.

And what about when you’re not in the mood for all that lark and just want to get to where you’re going in peace? This should be where the M140i excels but, unless you tick the £515 adaptive suspension box (our test car had regular suspension), it’s actually the least comfortable car here, fidgeting over every imperfection and crashing over potholes. The Focus deals with sharp-edged bumps more adroitly but is wearingly fi rm around town – even with the suspension in its ‘softest’ setting. Despite having the biggest wheels, the Civic is easily the most forgiving of the three, smoothing over lumps and ridges better than many regular family hatchbacks.

Mind you, the Civic is the noisiest motorway cruiser. Its boomy engine never really shuts up and there’s lots of tyre roar, although the Focus is only marginally quieter at a steady 70mph. Despite generating the most wind noise, the M140i is easily the most peaceful cruising companion; its engine settles to a relaxed purr and you aren’t bothered by much road noise.