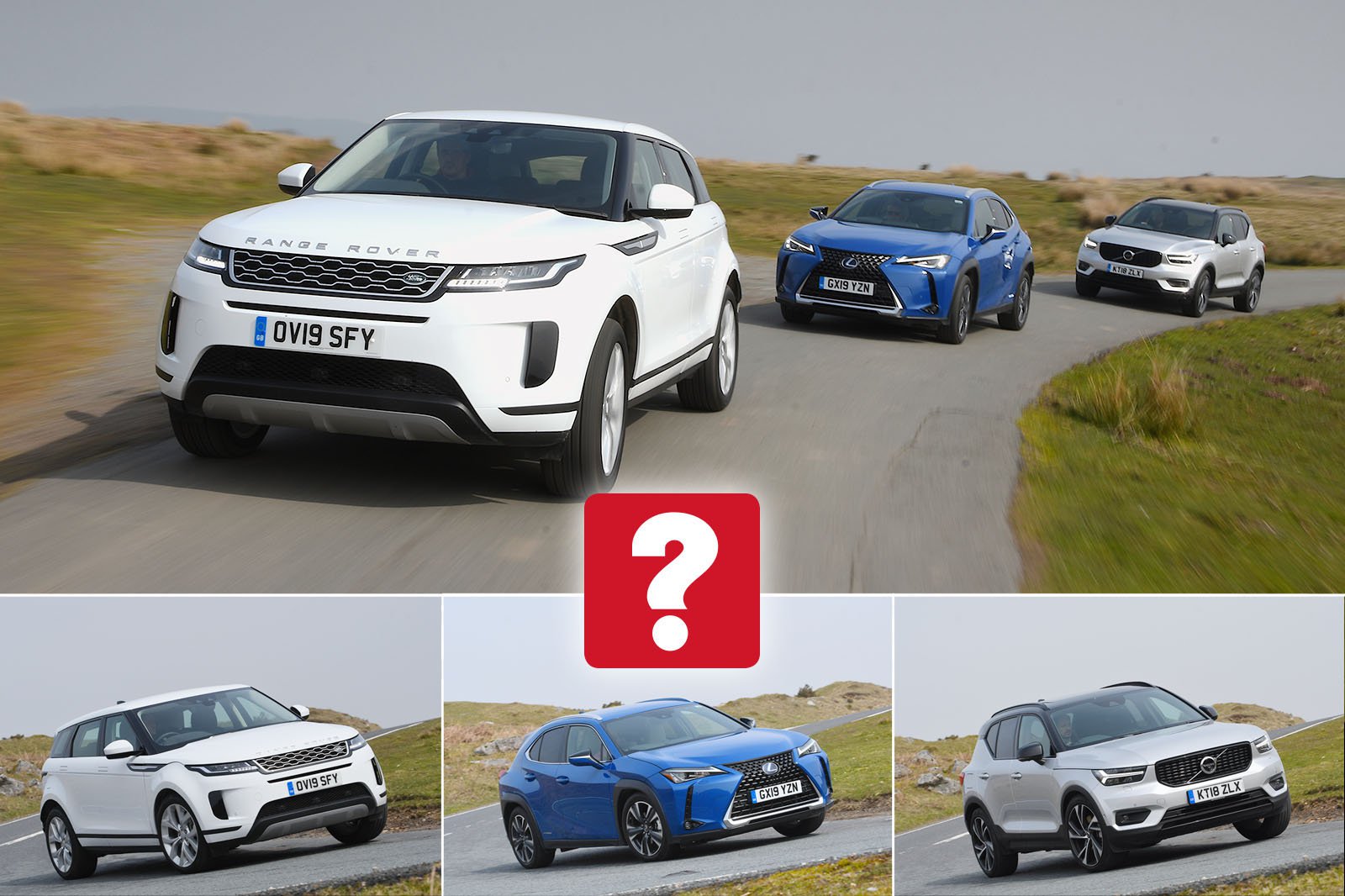 Another striking-looking Lexus SUV with petrol-electric power instead of diesel.

Our long-standing favourite family SUV is about to face its toughest challenge.

If there were ever doubts that Land Rover’s decision to produce the original Range Rover Evoque was primarily to woo style-conscious fashionistas, rather than provide for its traditional country set clientele, the Special Edition of 2012, featuring an interior designed by Victoria Beckham, dispelled them quicker than a crowd at a Metallica concert being played Spice Girls hits.

But the philosophy worked; the Evoque sold like copies of Wannabe (to keep the Spice Girls analogies going). And traditional buyers weren’t simply forgotten about, because even though it wore a suit as sharp as Sheffield’s finest scissors, it could still roll up its trouser legs and wade through the mud with the enthusiasm of an eight-year-old.

That explains why, despite being nearly all-new, this latest Evoque isn’t all that easy to tell apart from the original; why mess with a winning formula? But much has changed underneath, from its new, efficiency-improving 48-volt mild hybrid technology to an even smarter interior replete with an infotainment suite lifted from the pricier Range Rover Velar.

It will go up against an entirely new entry at the premium end of the family SUV sector from Lexus. The Lexus UX may share its underpinnings with the cheaper Toyota C-HR, but don’t let that put you off; that car is good to drive. The fact that the UX is a full hybrid can make it highly efficient, too; in an increasingly anti-diesel world, that’s an alluring quality.

Of course, both will have to beat our current family SUV champion and former overall Car of the Year, the Volvo XC40. The XC40 has proved particularly adept at seeing off challengers with a package that isn’t the absolute best in every area but is strong enough in those that are highly sought after in this market – most notably practicality, ride comfort and safety. 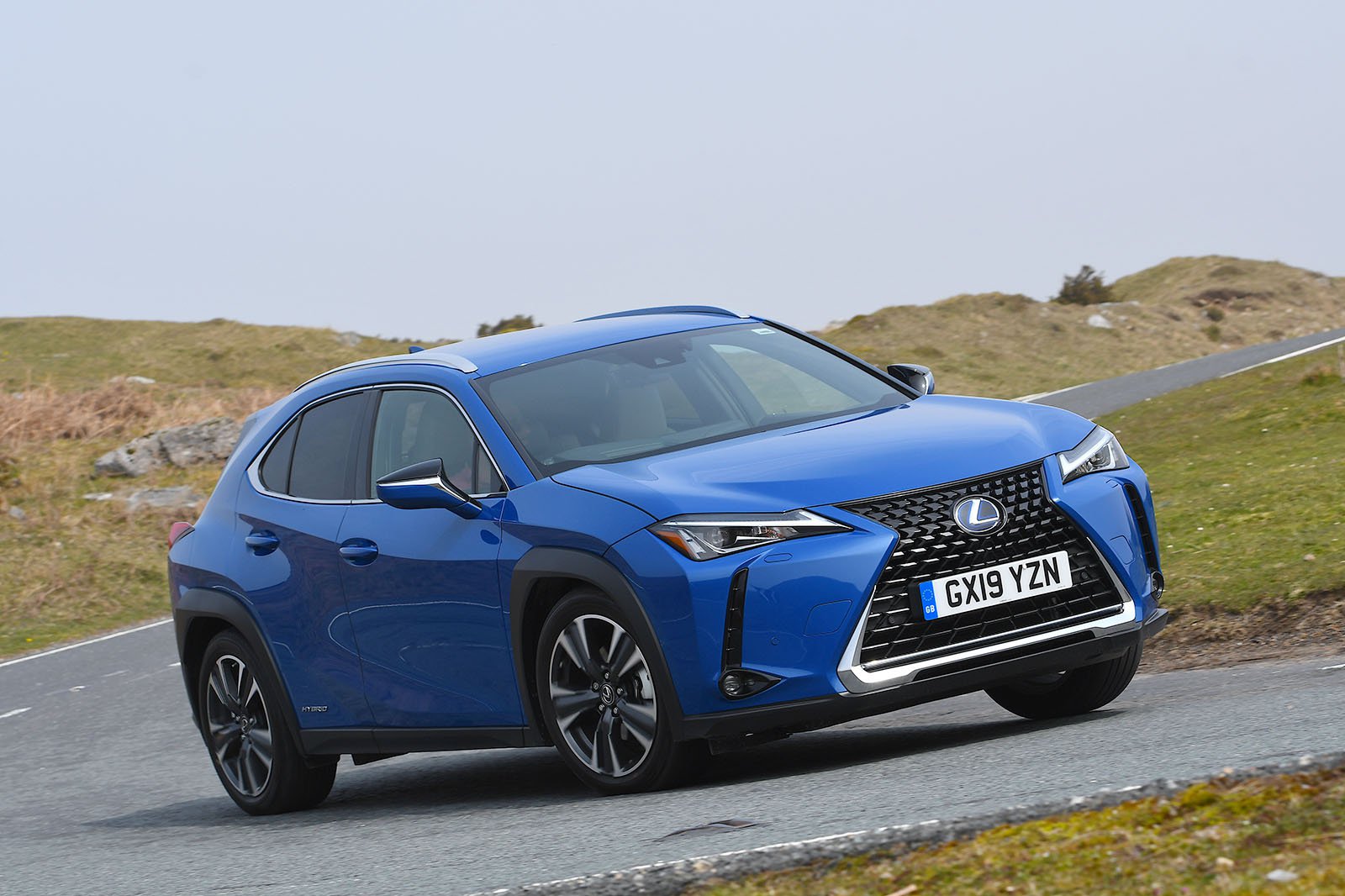 Who would have thought it? Given that the XC40 and UX make speed in such dissimilar ways (the former has a straightforward 2.0-litre diesel engine to the latter’s combination of a 2.0-litre petrol engine and an electric motor), both are surprisingly well matched when you put your foot down. The UX is a little slower to get a move on at first, but once it’s rolling, it just has the legs to pull ahead of its Swedish rival.

While the Evoque uses its mild hybrid technology to improve reponsiveness at low engine revs, its 2.0-litre diesel engine’s power deficit remains too much. And it’s not just the stopwatch that highlights this; attempt an overtake and you soon realise that it lacks the zip of the others. It’s perfectly adequate, though, and cruises happily on the motorway.

The mild hybridisation has also helped to rid the Evoque of an old Land Rover foible: a rickety stop-start system. Instead of the engine thundering into and out of action with a mechanical thrash and a jolt, à la the original Evoque, the new car is so much more restful in traffic. It kicks in and out as smoothly as the XC40 and is even quieter as it does so. Then again, neither engine fires or falls silent as seamlessly as the UX’s.

The UX also has the quietest engine when on the move; being petrol powered, it’s naturally more hushed than the diesels. And when it’s dropped in favour of the battery and motor alone (something it can do for extensive periods in town), you hear nothing from under the bonnet. For a diesel, the Evoque’s engine is very impressive; you can hear it but generally only as a background rumble. This leaves the XC40’s engine as the noisiest. 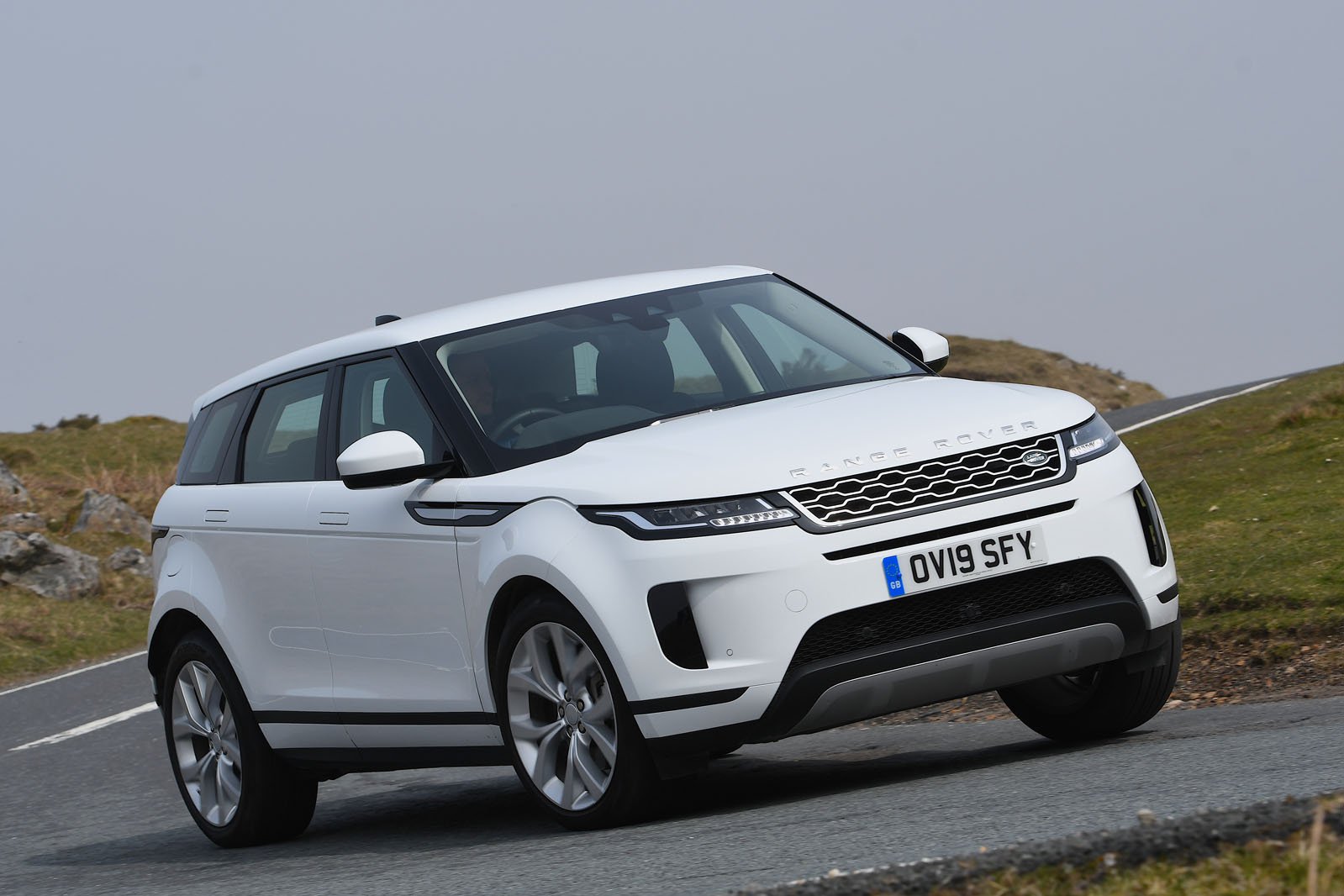 The Evoque is also much, much quieter than either of its rivals at motorway speeds. Yes, there’s a bit of wind flutter, but the comparative lack of road noise makes it the most peaceful. The XC40 is a little better for wind noise, but the loud tyre rumble you hear across any coarse surface spoils the cruising experience. Then again, the UX is the worst for both wind noise and road roar.

However, there is a fly in the Evoque’s otherwise calming ointment: its standard nine-speed automatic gearbox, which is quite reluctant to change into lower gears – a trait dialled in deliberately to reduce emissions. So, too, is the stop-start system’s predilection for killing the engine when your speed drops to around 10mph, with the assumption that you’re about to come to a halt; if the road ahead clears and you hit the accelerator, the engine starts slickly but the gearbox engages drive with an annoying jolt.

The XC40’s eight-speed auto isn’t razor-sharp to change down either, but it’s smoother and more reactive than the Evoque’s. The UX’s CVT auto is responsive and naturally free of jolts, but it makes the engine revs flare excessively when you accelerate.

The XC40’s floatier suspension softens the edges of potholes slightly better than the Evoque’s when you’re pottering around town. But you have to put up with more consistent side-to-side sway than there is in the Evoque, which still rocks your head gently from left to right, but less often. Both cars ride in a smooth, composed manner on the motorway on their standard-sized wheels, although it’s worth noting that the Evoque does become a bit fidgety if you upgrade to the 20in alloys. In short, these are two of the most comfortable SUVs in this price bracket; just be aware that a similar-priced executive saloon, such as the Audi A4, will be even smoother and more composed.

The UX is much squatter than the others; it’s nearer the height of a regular hatchback than most SUVs, so it rocks about the least. However, it’s fidgety at higher speeds and is the most abrupt over sharp ridges, both around town and on the motorway. 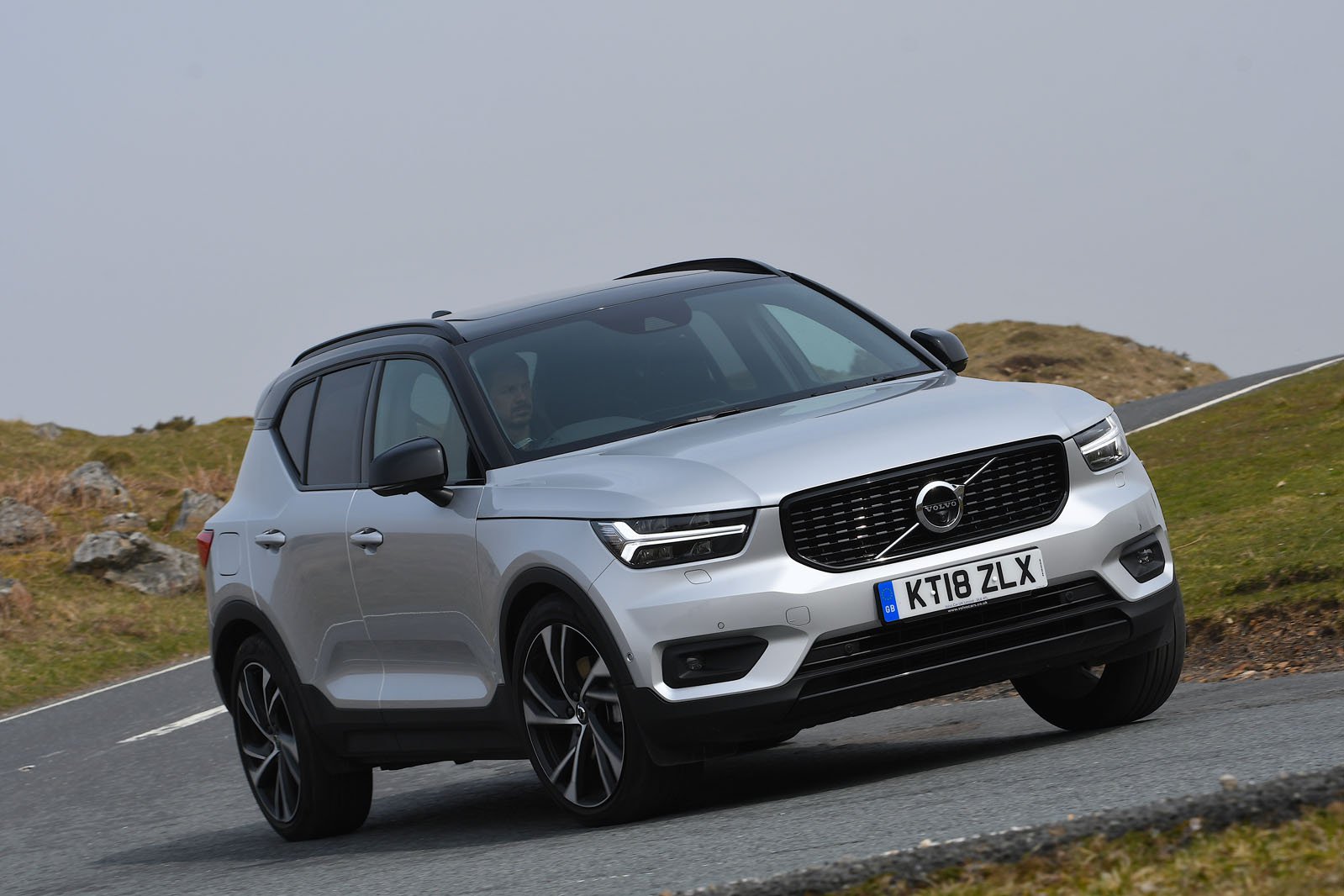 All three cars are effortlessly light to steer in town, but we wouldn’t recommend any of them if you have a penchant for nimble handling. However, if all you need is something that’s surefooted and undemanding to drive, the XC40 is quite appropriate. Its steering is direct enough that you can place it easily and keep it tracking straight on motorways, andyou only notice the car running out of grip or leaning more than the best-handling family SUVs when you start wilfully throwing it at turns with gusto.

The Evoque is broadly the same. Its steering is a little too keen to return to centre, which makes it slightly less confidence-inspiring to guide along a narrow road, but it otherwise feels as trustworthy and competent as the XC40.

The UX doesn’t lean as much as its rivals, but don’t take that to mean it’s sporty; it isn’t. Its steering is pretty inert, and because it has front-wheel drive (the others are 4x4s), accelerate hard out of a corner and you’ll feel those driven wheels lightly pulling the steering wheel left and right in your hands as the tyres scrabble for traction. The UX is the first to run out of front-end grip through corners, too.

Although you can buy a four-wheel-drive UX, you can pretty much ignore it as a tow car or off-roader, because it can pull just 750kg and has the least ground clearance. The XC40 is able to tow the most (2100kg) and can manage some asphalt-free shenanigans, but our experience shows that the Evoque, with its better ground clearance and all-terrain tyres, will go farther off the beaten track. And even though you have to make do with a towing capacity of 2000kg, it’s more stable when towing a caravan than the XC40.