* Testing in northern Sweden * All engine variants sampled * Evoque on sale in the summer... 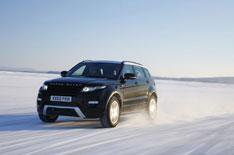 Don't think it's all about performance on the road. The Evoque is still a Land Rover and will be more than capable off-road, even if doesn't have the ground clearance of other models.

The Evoque might have less rear axle articulation than the Freelander, but Richards believes improvements to Terrain Response, with better monitoring and control of each individual wheels, means it will outdo its sister car car off-road. It's based on a shortened Freelander platform, but with shorter front and rear overhangs it also has steeper approach and departure angles.

Hill Descent Control, familiar from other Land Rover products, is now smoother in operation and can safely control the speed of the car on even icy descents. Owners will be able to dial in descent speeds of between 3.7 and 12.4mph (or between 1.9 and 9.3mph in reverse), take their feet off the pedals and remain confident in arriving at the bottom unscathed.

Hill Start Assist and Gradient Release Control systems also mean that if we have another winter like the past two, you won't be stuck at the foot of a hill, the car feeding in power to ensure you make the climb. The Evoque system can even cope with one set of wheels on the clear, heated Tarmac at the Swedish test centre and the other on glassy ice impossible to stand up on.

Check out our video of the Evoque in winter testing.