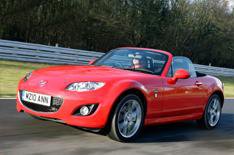 We hate to use the word affordable in relation to cars. Theyre only affordable if you have the money. As roadsters go, though, the Mazda MX-5 has very little competition in the affordability stakes and none at all when it comes to capturing the spirit of a compact, light, soft-top two-seater.

The MX-5 has been around now for 21 years. Mazda did exactly what it set out to do in 1989, which was to resurrect the British roadster of the 1950s and 1960s, but with a hood you could lower or refit in seconds rather than hours, and without the leaks and unreliability.

It succeeded so brilliantly that, despite a couple of model changes since, the recipe is much the same as it was then. Few people are as devoted to their cars as MX-5 owners, and if youve ever driven one youll understand exactly why.

Its something Renault tried to replicate during 2010 with the Wind, but didnt quite pull off. This year Mini will have a go with a car based on the Roadster concept, and it may prove to be a formidable adversary.

There are some pretty tasty open-top cars if you have this budget. If anything, youre spoiled for choice. There are roadsters (two seats) and cabriolets (four); big-engined small cars and small-engined big ones; petrols and diesels; pretty ones and pretty ugly ones.

Its the BMW Z4 that comes out on top again, though, mainly because it asks you to make fewest allowances, assuming you can get by with just two seats.

It has a folding hard top, an idea that turned out to be no more than a passing fancy for some manufacturers.

However, that hard top makes the car less of an indulgence just ask the owners of some other convertibles whove been arriving at their destination with blue noses and chattering teeth in recent weeks.

There are other cars in this category which do some things better than the Z4, but none does them all to such a high standard.

We'll say just one word to justify our choice of the Mercedes in a sector where, if youll pardon the pun, the skys the limit: Aircap.

What is it? A small mesh flap on the windscreen header rail, thats what, and another between the rear headrests. Together, they deflect air away from the passenger cell and ensure that the Mercedes E-Class Cabriolet is the only convertible where four people can travel with the roof down and the rear occupants wont hate every yard of the trip.

For good measure, you can also get the Airscarf front-seat neck-warmers from the SLK to make the car even more cosy.

Its taken years to perfect the aerodynamics of the Aircap system so that it not only works, but does so without spoiling the cars good looks. Well, not too much.

The other all-new four-seater convertible in this category in 2010 was the Maserati Grancabrio, and if its style you want and dont care how much you have to pay for it, then look no further. It even makes you forgive that its not particularly engaging to drive.

Performance
0-62mph 6.4sec Top speed 155mph
Running costs
Economy 40.4mpg CO2 185g/km
Insurance group 43
Tester's view
I might have a few miles on the clock but I can still out-sprint all the younger members of the road test team in a race to grab the keys to an open-top car.

Im a sucker for the wind-in-the-hair experience and the way an open-top car enhances every aspect of the driving experience.

There are few greater or guiltier pleasures than whistling along a country lane with the roof down, listening to the rasp of a throaty exhaust bouncing off the scenery.

Few roadsters tap into this feeling better than a BMW Z4 or Mazda MX-5. Each has the essential ingredients to thrill. Theyve both got that classic front-engined, rear-wheel-drive layout, razor-sharp steering and a snappy gearchange.