'Pods' that drive themselves 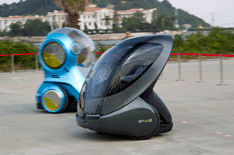 Chris Borroni-Bird, GM's director of advanced technology concepts, is looking ever further ahead. By 2030, he says, 60% of the world's population will be concentrated in mega-cities, which will not be able to sustain a personal transport system based on today's model.

He foresees people being moved around in two-wheeler electric pods based on a skateboard-like platform. They will be driven by in-wheel electric motors, can turn in their own length and will be able to be operated manually or to drive themselves.

They are interconnected through a mixture of sensors and GPS-based telematics, so they will be able to avoid each other negating the need for expensive and weighty crash protection structures and can even be operated remotely through a smartphone, so they will be able to park themselves and return to you when summoned. GM calls them Electric Network Vehicles, or EN-Vs.

A pipe dream? GM has had three performing a routine 25 times a day for the six months of the Shanghai Expo, a world trade fair, without problems. We've even driven one it's like operating a life-size computer game, with the same instant sensitivity. We've also watched two going through crash-avoidance and self-parking routines.

While they would not be able to function in today's city environment of bikes, scooters, cars and buses, Borroni-Bird believes that with special lanes such as those reserved for buses or cycles they have a future. Equally, they would work in gated communities where fossil-fuel vehicles are banned. Either way, it is going to require big changes to the roads infrastructure to support them, but it could happen.

'We are already talking to a few people about some projects,' one GM insider told us. China, where the creation of new cities seems to happen almost overnight and there is a huge commitment to an electric-car future, would be the obvious starting point.