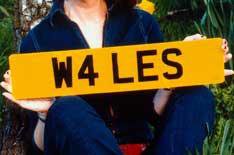 English and Welsh police have launched a week-long crackdown on illegal numberplates.

The operation is aimed at reducing the number of vehicles on the road that have numberplates that cannot be read by speed cameras.

In particular, the operation will target people who modify numberplates by altering the layout of letters and numbers to change how they read, or who use non-standard fonts, tape or screws to obscure details.

At present, anyone caught faces up to a 1000 fine, the withdrawal of the registration they use and being declared an MoT test failure.

However, the police have called for the Government to impose higher penalties in future.