More for you |
Every 5-star car on What Car?Used test: Maserati Levante vs Porsche MacanNew issue of What Car? magazine on sale nowMost and least reliable small SUVsRevealed: the car makers whose discounts have got bigger since lockdown
Home
News
Public favours pay-as-you drive roads
news

* 80% say congestion is a 'serious problem' * Over half support pay-as-you-drive roads * but just 30% think doing so would cut congestion... 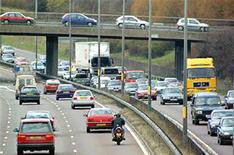 Over a half of adults think motorists should be charged according to how often, when and where they use the roads, according to a new report from the from the Department for Transport

The report, called 'Public attitudes towards road congestion, November 2009 to February 2010', shows that seven in 10 people believe that a new charging scheme based on times of travel and route taken won't reduce congestion.

The problem, according to the majority people who think such a scheme won't cut congestion, is that drivers will not be able to change their behaviour.