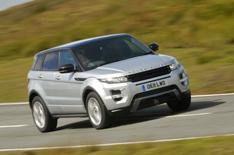 Four decades after the birth of Range Rover, Land Rover is about to launch the Range Rover Evoque the smallest, lightest, most fuel-efficient car it has ever made.

The Evoque is more than just a smaller, cheaper (prices will start at 27,995) addition to the Range Rover fold, however: its being described as the catalyst for change within the whole Land Rover business. Its vital to the companys plans to build cars that are more sustainable and relevant, and the start of a programme that will bring about greater differentiation between Range Rovers and Land Rovers in future.

Therell be two-wheel-drive and four-wheel-drive versions of the Evoque, petrol and diesel engines with fuel economy of up to 58mpg and CO2 emissions in some cases below 130g/km, and the kind of personalisation options you can get on a Mini or a Fiat 500.

Take a look at the Range Rover Evoque here.

Take a closer look
Get closer to the Range Rover Evoque by having an closer look at its dashboard. Simply click on the icon in the bottom right corner of the photo below, then move your cursor around the photo for a closer look. The icon may take a few moments to load.