The new Porsche Macan promises sports car pace and handling in an SUV package. Can it beat the uber-popular Range Rover Evoque and Audi's range-topping Q5, the SQ5?... 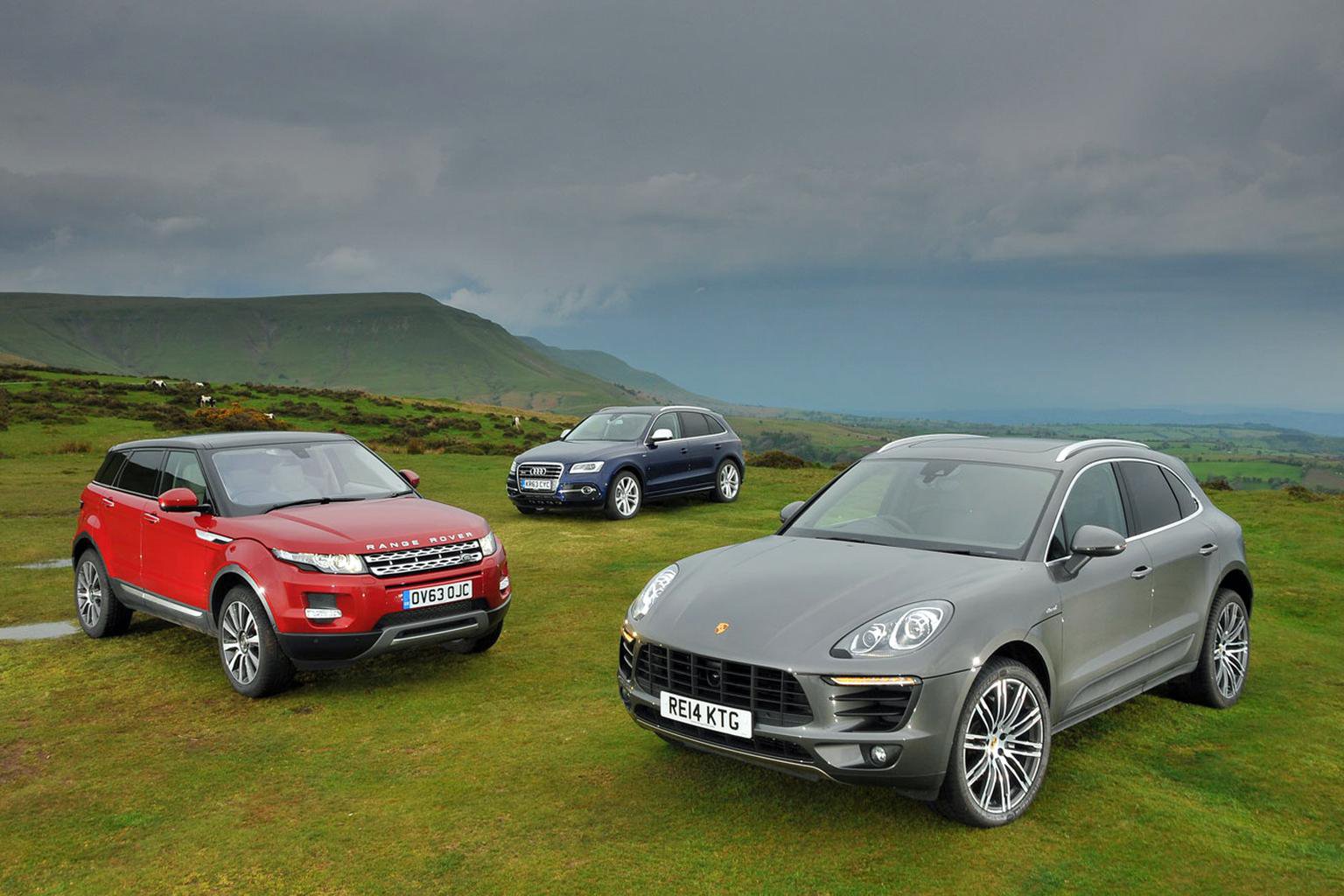 The Cayenne is proof that sports car specialist Porsche can build a convincing SUV, but can it repeat the exercise on a smaller scale? The four-wheel-drive Macan Diesel S shares its basic underpinnings with the Audi Q5, but it has to deliver the sort of sporting driving experience you expect from the Porsche badge.

The 255bhp Macan SUV will cost you more to buy than the range-topping Q5 after discounts, despite the Audi offering considerably more clout from its 309bhp engine.

Cheaper still is the established favourite of fashion-conscious SUV buyers, the Range Rover Evoque. It may cost a fair bit less but its 188bhp diesel engine looks seriously outgunned in this company.

So, is the Macan another Cayenne, or is there little substance behind the badge?

The Porsche’s automatic gearbox shifts smoothly in relaxed driving – or stick it in Sport mode and it quick-fires up and down the ratios. This makes it easy to exploit the Macan’s hot hatch-like pace, which arrives smoothly and with no sudden surge.

If the Porsche is hot hatch-fast, the Audi SQ5 is sports car-quick, powering from 0-60mph in 5.1sec. Such eye-widening acceleration feels incongruous in an SUV, but a smooth power delivery means the SQ5 is as easy to drive in traffic as on fast B-roads. Its auto gearbox isn’t as smooth as the Porsche’s, though.

The Evoque feels sluggish in this company; you need to work its engine harder to keep pace with fast-moving traffic. More irritating, though, is the nine-speed auto ’box, which pauses momentarily just when you want a burst of speed.

The Range Rover is also the noisiest car here, because of its gruff engine. The Porsche and Audi’s are quieter, but road noise is present in all of these SUVs – particularly the SQ5.

The Range Rover also falls down in other areas; body control is slack and there’s a tendency to wash wide through fast corners – not to mention a lumpy low-speed ride  – which means it simply can’t live with these sportier SUVs.

The Macan impresses most, although it’s important to note that our test car was equipped with optional air suspension. Steer into a corner with gusto and the nose turns in keenly and body lean is kept tightly in check. It feels remarkably light-footed and composed, even when asked to change direction quickly, while the precise steering and smooth ride make it just as suited to pottering around town.

It’s as easy to carry impressive speeds through corners in the Audi, but the SQ5 doesn’t respond as quickly when asked to change direction suddenly, and its steering isn’t as accurate. Even so, it’s still remarkably agile by SUV standards, and although it’s a tad fidgety around town, it still rides comfortably enough.

All three SUVs come with powered driver’s seats (with adjustable lumbar support) and will comfortably accommodate very tall occupants up front, although some drivers may find the Porsche’s narrow footwell slightly irritating.

The Audi’s more generous headroom makes for an airier cabin; it’s also got the best rear visibility, because the sloping rooflines in the Porsche and Range Rover cause bigger blind spots to the rear three-quarters.

Anyone familiar with recent Porsche interiors will recognise the layout in the Macan. The cabin is bisected by a central spine with well-damped, if overwhelmingly numerous, buttons.

The Audi’s dashboard isn’t quite as classy, with flimsier buttons and switches. However, the more minimalist design and intuitive air-con controls actually make the layout easier to use.

There’s no denying the Range Rover’s sense of theatre, with its rising rotary gear selector and crystal-effect speedo detailing. Thankfully, that flair doesn’t come at the expense of useability, because most of the dashboard controls are easy to fathom and are thoughtfully positioned. However, the cabin doesn’t feel as solidly put together as its German rivals’.

If rear passenger space is a priority, you’ll want the Audi, mainly because it has considerably more legroom than both of its rivals. The Porsche is the least generous here for rear headroom, so the truly lanky could feel a bit hemmed in. Even so, these are big cars, and a six-footer will be able to fit behind a tall driver easily.

The Audi wins on boot space, too. It has the broadest and deepest load bay here, although the Macan’s boot is slightly longer. The Evoque, meanwhile, has the smallest boot, despite what Land Rover claims.

That said, you’ll easily fit a couple of buggies in any of these SUVs, and all have rear seats that fold flat for when you want even more carrying capacity.

The Range Rover is the cheapest of the trio to own privately; it has the lowest purchase price and strong resale values, which is why it’ll cost you around £2000 less than the Porsche and Audi if you sell it on after the first three years.

However, when you consider the superior performance of the Macan and SQ5, their costs actually seem very reasonable; both German cars also pipped the Evoque in our real-world economy tests.

The Porsche is expected to hold on to more of its value than the others; it’s just the lack of a discount (something that’s unlikely to change) that makes it the priciest car to own privately.

All three SUVs get climate control, auto lights and wipers, a multi-function steering wheel, rear parking sensors and alarm. The Macan is the only one that doesn’t get genuine leather upholstery, xenon headlights or cruise control as standard, while the Evoque is the only one to get a rear-view camera.

The Macan isn’t flawless; it’s the least roomy in the back and it will cost you the most to run if you’re buying privately.

However, it’s easily the most refined car here, has the classiest cabin and the way it blends comfort and agility – at least when equipped with optional air suspension – is genuinely groundbreaking in this class.
In fact, it’s everything most SUV buyers will want and need, and the fact that you’ll have to wait nearly a year for delivery if you order now is testament to that.

Can’t wait that long? The Audi SQ5 is a very tempting alternative. It’s the most practical of the three by a stretch, and its sports car-slaying pace is something to behold. It’s surprisingly good fun to drive in other respects, too – even though it’s not quite as nimble as its German sibling.

The Range Rover comes out of this test looking good value for money, but there’s a good reason for that. For all its charm, it has none of the vivaciousness displayed by its German rivals. It’s also the least comfortable of the three, because of its choppy ride and, to compound matters, it’s also the noisiest. If you’ve fallen for the Rangie’s charms (and many people do), we’d strongly recommend saving several thousand pounds and opting for the better-value Pure trim.

So, regardless of how achingly desirable the Evoque may be, and how shockingly fast the SQ5 is, if you’re looking for a posh and sporty SUV, the Macan is most definitely the best of its breed.

Against No discounts; average equipment and rear legroom

Verdict A new benchmark in the SUV class. Great to live with and fantastic to drive

Against Overly light steering; not as nimble as the Macan

Verdict More practical and faster than the Porsche, but not quite as brilliant to drive

For Comparably cheap to buy; loaded with equipment

Verdict A compelling prospect, let down by underwhelming dynamics