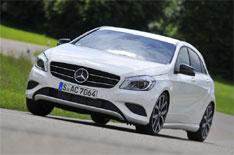 Cars from Renault, Nissan and Mercedes will feature more shared engines in future, after their parent firms agreed to develop a new range of motors together.

The Renault-Nissan Alliance and Daimler announced the new arrangement at the Paris motor show. Engineers from both companies will develop new direct-injection, turbocharged four-cylinder petrol engines which, the firms claim, 'will feature state-of-the-art technology in a compact package'.

The new engines are likely to appear in cars from around 2016. No further technical details have been released, but given industry trends and the needs of the three brands, it's likely that the engines will be smaller than 1.6 litres in size and destined for mid-size vehicles such as the Mercedes A-Class, Nissan Qashqai and Renault Megane.

Another part of the new deal, focusing on transmissions, will be led by Daimler, and then licensed to Nissan for use in its vehicles, and Infinitis, from 2016.

Renault-Nissan and Daimler already have a technical relationship that allows some Mercedes vehicles, including the latest A-Class, to use Renault diesel engines. The firms are also working together on a rear-engined small car project that will become the next Smart car and prove the base for the next Renault Twingo.