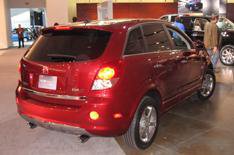 General Motor's Saturn brand unveiled a near production ready hybrid, an under-development plug-in car and a Flextreme concept during a green onslaught at the Detroit motor show.

Saturn Vue Green Line 2 Mode
The Saturn Vue has been pioneering green technology for some time, and in Detroit the General Motors offshoot revealed its third hybrid model.

At the Detroit motor show Saturn has unveiled the next evolution, the Green Line 2, which features a pair of electric motors and a hybrid system, plus lighter-weight wheels and low resistance tyres.

The net result is that the 3.6-litre petrol V6 with the electric motors can achieve 30mpg, which is a 50% improvement over the conventional Vue V6.

It's acceleration figures remain impressive, too, as it is capable of 0-60mph in 7.3 seconds.

It will go on sale in the US later this year. However, only the fuel-saving technology stands any chance of being transferred across the Atlantic to the UK, possibly on the Vauxhall Antara or Chevy Captiva, with which the Vue shares parts.

Saturn Vue Plug-In Hybrid Electric Vehicle
The race is on between GM's Volt and Vue to see which plug-in hybrid can get to market first.

Both are mooted to go on sale in 2010, although company insiders concede the Saturn is closer to reaching its production goals than its counterpart.

The car will use a modified version of GM's two-mode hybrid system, plug-in technology and a lithium-ion battery pack to double the economy of the new Saturn Vue Green Line 2 Mode in city driving conditions.

At present, test versions of the car can only complete ten miles at slow to moderate speeds under electric-only power, but this is expected to substantially increase by 2010.

Rather than the latest preview of GM's Flextreme technology, it was in fact a rebadged version of the Opel Flextreme shown at last year's Frankfurt motor show.