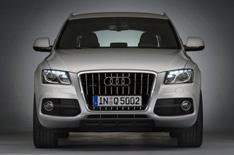 The Q5 will go on sale with one petrol and two diesel engine options.

The 2.0-litre diesel uses a six-speed manual gearbox, but the other two engines run with a semi-automatic seven-speed gearbox that Audi calls S tronic.

Four-wheel drive will be fitted to the Q5 as standard, with power 40% of power delivered to the front wheels and 60% to the rear ones in normal road conditions. Audi says this is to give the car a sporty, rear-biased drive.