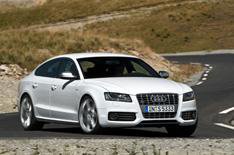 Audi will unveil three new cars at the Frankfurt Motor Show next month: a high-performance flagship for the A5 Sportback range, the most frugal petrol A3 yet and an A4 with 'clean diesel' technology.

S5 Sportback
The S5 Sportback has a supercharged 3.0-litre V6 petrol engine, permanent four-wheel drive and a seven-speed semi-automatic gearbox. Together, they give a 5.4-second time for the 0-62mph sprint and a limited maximum speed of 155mph.

The new car stands out from other A5s with subtle exterior tweaks, sports suspension and black brake callipers, visible through bespoke alloy wheels. It also has speed-dependent power steering and electrically adjustable leather-upholstered sports seats. Sales start in spring next year, but the price has yet to be confirmed.

New 1.2 TFSI engine
Also due to go on sale next year is the brand new 1.2 TFSI petrol engine that is making its debut in the A3. Particularly light and designed to minimise friction, it returns an average fuel economy of 51.3mpg and 127g/km CO2 emissions in the hatchback.

In both respects, those figures make it considerably better than the current 1.6 engine, which it is expected to replace. The new engine will provide the entry-level point to the range, with prices expected to start around 15,000.

Clean diesel A4
Audi's Frankfurt stand will also see the introduction of clean diesel technology (first seen in the Q7 and designed to cut NOx emissions) in the A4. With a common-rail fuel-injection system and exhaust gas recirculation, the 3.0-litre TDI engine is already very efficient, but to further reduce nitrogen emissions, the exhaust also includes a special catalytic converter and has an additive injected into the exhaust gases.

The result is an engine that, combined with a six-speed Tiptronic gearbox, matches the performance of the current 3.0 TDI 0 to 60mph in 6.2 seconds but betters its economy, returning an average of 42.1mpg compared to the current cars 40.9.

The new unit also already meets Euro 6 emissions standards that are not due to come into force for five years. However, Audi has not yet confirmed whether it will sell this version of the car in the UK.