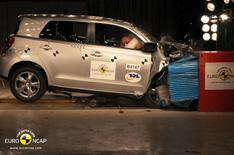 The company has previously enjoyed a string of five-star test results, most recently with the Toyota Prius receiving special praise for its pedestrian protection score.

However, the Urban Cruiser received its disappointing score because of a weak result (58%) in Adult Occupant Protection, according to Euro NCAP.

Dr Michiel van Ratingen, Euro NCAP's secretary general said: 'The result from Toyota is disappointing. Consumers should always check when looking to buy new car and not make presumptions about a vehicle's safety performance due to the brand it carries.'

Toyota is adamant over Urban Cruiser's safety
A spokesman for the manufacturer said: 'Toyota gives priority to building cars that are as safe as possible.

'In 2009, we received a five-star rating for all three new cars that were evaluated by Euro NCAP (iQ, Avensis and Prius).

'We are currently investigating the Euro NCAP result in detail, in order to understand why there is a difference between our Toyota assessment and Euro NCAP's rating.

'Together with other car makers, we are also discussing with Euro NCAP certain aspects of their evaluation methodology, which might also explain why the rating is lower than we expected.

'The three-star rating for the Urban Cruiser has been triggered by the "pole side impact" test. During this assessment, the dummy head area deceleration slightly exceeded the demand value of Euro NCAP.

'There is a difference of opinion between us and Euro NCAP on a technical matter, namely peak acceleration of the head area in the Pole Side Impact test.

'Our in-house tests, which are designed to meet the highest safety requirements, indicated that the protection provided by the head curtain airbag would be in line with a five-star Euro NCAP rating.

'Once again, we remain fully convinced that Urban Cruiser is a safe car.'

Euro NCAP'S Dr Ratingen said: 'In 2010 we predict further results such as these because Euro NCAP's next stage of the rating scheme kicks in and requirements become even tougher.'

Euro NCAP released scores for a further 10 cars sold in the UK, with nine scoring the maximum five stars and one other getting four stars. The results are as follows: