More for you |
What Car? Real Range: which electric car can go farthest in the real world?2020 Hyundai i20 small car revealed: price, specs and release dateRanked: The most reliable executive cars - and the leastFord Focus ST long-term test reviewCar recalls: what are they and what to do if your car is recalled
Home
News
Two-tier tax system for motorway drivers
news 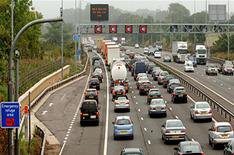 Drivers who use motorways could be forced to pay higher Vehicle Excise Duty (VED) rates, according to proposals being considered by the Department for Transport and Treasury.

Under the two-tier plan, part of a driver's VED would be paid to private operators who would manage the UK's roads.

Cameras could be used to spot those who had not paid the higher rate of tax. Drivers caught dodging the tax would then be fined.

The research has been prompted by the need to find ways to replace dwindling revenues from road tax and fuel duty, as manufacturers produce increasingly efficient vehicles.

Official data suggests that the current 6bn annual revenue from road tax could plummet by 75% by 2029-30.

However, a Treasury source said that the plan would not necessarily mean drivers paying more than at present.

It is also unlikely that drivers would be charged depending on how far they drive on motorways, or whether they use them at peak times, such as during rush-hour periods.

A spokesman for the Department for Transport said: 'The Government will not implement tolls on existing road capacity and has no plans to replace existing motoring taxes with pay-as-you-go road charging.'

The findings of the study have been attacked as elitist by the AA, though. The motoring body claims any such moves could make motorways the preserve of the wealthy and increase congestion on rural roads.

AA spokesman Paul Watters, said: We dont want a first- and second-class system on the roads. It will lead to slower journeys and more congestion. It will also be an extra nuisance to towns and villages and increase the risk of accidents as A-roads become too busy.

However, Stephen Glaister, director of the RAC Foundation, said that a scheme could work if the money raised was ring-fenced and used to improve the road network.

He said: 'Ministers would go a long way to restoring trust among drivers if the proceeds were ploughed back into road provision.'