UK has one million potholes 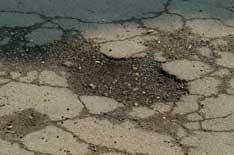 There are more than one million potholes on Britain's roads, according to the latest report from the Asphalt Industry Alliance (AIA).

The annual report into the state of the roads in England and Wales also reveals that utility companies are putting 2.5 million trenches into roads every year.

The congestion resulting from the potholes and trenches costs the UK an estimated 8.6 billion.

The report concludes that councils are struggling to repair the roads because there is a shortfall of more than 1 billion in highway maintenance budgets and an 11-year backlog of maintenance work. The average wait for resurfacing is now reported to be 65 years.

In addition, local authorities are spending more on compensating people for injuries and damage to vehicles than they do repairing road surfaces.

Councils paid out 53 million in compensation and spent 12m handling claims in 2007, compared with 52m on repairing potholes.

Now, the AIA is calling for an immediate injection of funding to address the shortfall.

AIA chairman Jim Crick said: 'Roads are a vital asset and our most valuable one. We all depend on them every day and it's time the under funding of their maintenance was addressed.'