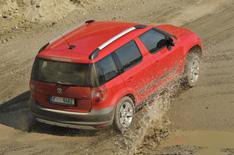 What's on offer?
There will be two engines for front-drive models and four in the all-wheel-drive versions. Skoda is likely to offer three trims, although what they'll be called has yet to be decided.

Front-drive versions give you the choice between a new 105bhp 1.2-litre petrol turbo engine linked to either a six-speed manual or a seven-speed twin-clutch semi-automatic gearbox, or a 110bhp 2.0-litre common-rail diesel with a five-speed manual.

In four-wheel-drive models you can choose one of three common-rail diesels 110bhp, 140bhp, or 170bhp. All are 2.0-litre power plants with six-speed manual gearboxes. There's also a 160bhp 1.8-litre petrol turbo, also with a six-speed manual.

Dr Eckhard Scholz, Skoda's head of technical development, says every Yeti will at least match the best of its competitors for fuel economy and CO2.