More for you |
Car dealerships in England are openAlfa Romeo, Fiat and Jeep offer customers free 12-month job loss protectionThe best cars in the history of What Car?Confessions of a car salesmanScrappage scheme: latest deals and offers
Home
News
Wow - or why?
news

* Sporty version of the Countryman * For the more active buyer * Expected to be put into production... 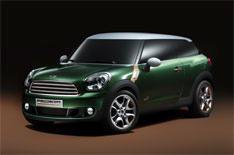 A lot of Mini fans will take a look at this striking Paceman concept car and think 'wow'! Many others might look at the three-door coupe version of the Countryman and think 'why'?

The Paceman is identical to the Countryman in all but height, yet it has two fewer doors and will be available as a four-seater only.

So why go to the bother of creating the biggest and most practical Mini yet, one that a small family with kids could actually live with, and then instantly make it less practical again?

Why not, says Mini's outgoing designer of the past decade Gert Hildebrand. He goes on to point out that Volvo has the four-seat C30, and there are dozens of three- and five-door superminis and small family cars such as the VW Polo and Golf. So, why shouldn't Mini do the same?

'It makes sense in this class to have a three-door and a five-door version,' says Hildebrand, 'the platform of the Countryman has more to offer than what is now on the road.'

Hildebrand thinks there are buyers who still want the taller ride height and driving position of the Countryman, but won't want or need to access the rear seats as often.

According to Mini, buyers will like the added boot space, but they will want something altogether more sporty and racy-looking than the Countryman. They probably go kite surfing at the weekend, rather than taking a nice walk with the kids they're that kind of people. The Paceman, says Mini, is the first sports activity coupe in the small car segment.

Design
The 'helmet' roof still sits on those trademark hidden rear pillars, but it starts 20mm lower and slopes dramatically to finish 60mm lower than the Countryman's. Combined with large, one-piece rear light clusters, and butch haunches over the rear wheels, it has a broader look. This all helps to make it look hunkered to the ground.

Blacked-out windows always make concept cars look more dramatic and it's no different with the Pacemen, the dark windows exaggerating the contrast between the white roof, the Jade green bodywork and the glazing. It's hard not to look at it in profile and think of a mini Range Rover Evoque.