You couldn't make it up 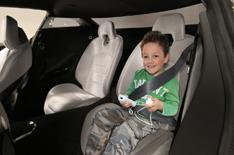 Those jolly japesters in the car industry couldn't resist pulling a few April Fools gags, so we thought we'd share some of the best ones with you.

Designed to stop dogs fouling against the sparkling alloys of new BMW cars, the innovative Canine Repellent Alloy Protection system (C.R.A.P.) is the latest offering in the BMW EfficientDynamics programme.

Using the EfficientDynamics Brake Energy Regeneration system, energy that would normally have been lost during engine over-run and during braking is harnessed as Rim Impulse Power (R.I.P.) and stored for future use.

Whenever a dog tries to relieve itself on the wheel of a suitably-equipped BMW, a small and relatively painless electric shock is immediately administered to the animal, thus deterring it from future fouling.

Dr Hans Zoff, Head of Automotive Security from BMW AG, said: 'Research shows that most BMW customers like to keep their cars clean and dog fouling is a constant irritant.

'Not only does the Canine Repellent Alloy Protection system support this aim, but it does so using energy created through the EfficientDynamics programme.'

Ford
Ford has announced that the world's first 'prescription windscreen' would be offered as an option on the Kuga 4x4, allowing anyone with defective eyesight to leave their glasses at home.

'Skiers can buy prescription goggles and some divers wear prescription masks, so why should drivers be left out?' said Dr. Rolf Apilo, Ford of Europe's Automotive Lens Specialist.

A bi-focal option will also be available and research into prescription mirror technology is also being investigated by the Ford Automotive Lens Specialist Engineers (FALSE.)

Kia
Kia has revealed the development of the Kee-wii, a car controlled by wireless hand-held units rather than a steering wheel or pedals.

Franz Josef-Hicks, head of the Advanced Propulsion Research Institute and Laboratory at Kia Motors New Zealand, explained; 'The traditional driving controls are replaced by a small 'controller' which fits comfortably into two hands.

'Making steering motions with the small controller will turn the car in whichever direction the driver likes, while the accelerator and brakes are button-operated. It is a very simple and intuitive system.'

Mr Josef-Hicks added: 'Every parent is embarrassed at the sharp and speedy computer driving skills of their children - it seems obvious to us that if children as young as eight can drift, rally and race their way to multiple world championships on a games console, then this new driving system will be simple enough for anyone to use.'