Home
Advice
How much does breakdown cover cost?
advice

How much does breakdown cover cost?

If your car ever conks out, you’ll be glad you’ve got breakdown cover. We look at all the options and find out which providers do the best job...

How much does breakdown cover cost?

There are plenty of breakdown providers to choose from. In our online search, we found 17, including recovery specialists such as the AA and RAC, insurance companies that offer cover with and without car insurance, and a building society (Nationwide) that provides breakdown cover as part of an insurance bundle for £13 a month with its FlexPlus account. Policy prices vary widely, and so does the level of cover provided and the specific items included, so it’s important to read the small print.

It’s also worth checking whether your breakdown provider will come to your assistance for free if you misfuel your car. Putting petrol in a diesel-engined car or vice versa is a mistake made by around 300,000 people a year in the UK. While the AA and RAC charge a fee for draining the fuel tank, some of the less well-known providers, including AXA’s policies and those from ETA, GEM Motoring Assist and Rescuemycar, will fix the problem for free. 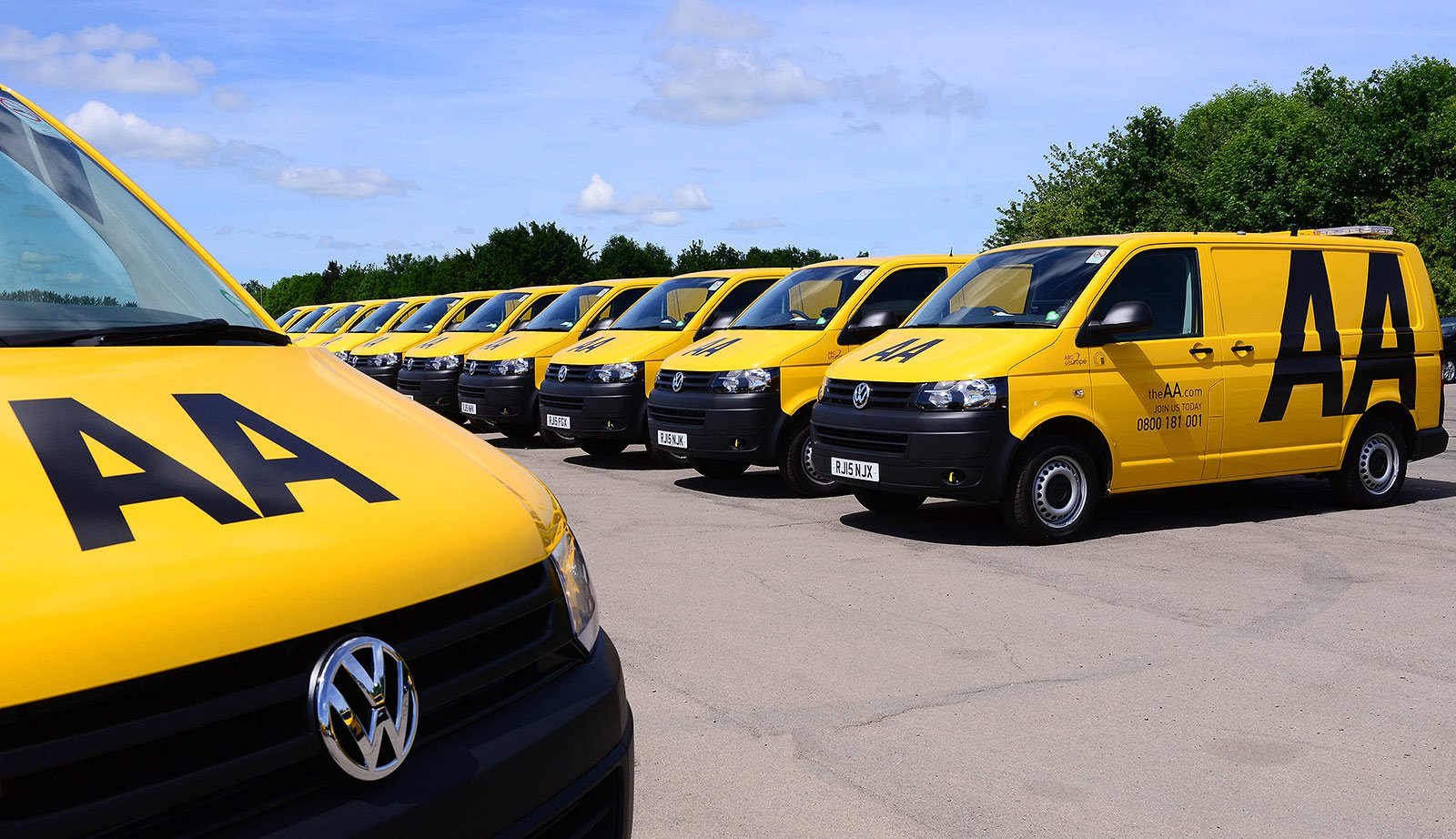 Another significant difference between breakdown providers is whether they have their own mechanics and vehicles or use third parties. The AA and RAC are the only providers with their own recovery fleets. The advantage of this is that you should get a consistent level of service because all patrols are trained and have to pass exams before they can go out on the road.

According to our research, this means they’re significantly more likely to be able to fix cars at the roadside than independent car recovery agents. This is the best outcome for motorists, because it means your car doesn’t have to be towed to a garage for potentially costly repairs.

On the flipside, some of the breakdown providers that use local independent recovery services have access to bigger fleets of operators than the AA and RAC, so they might be able to get someone to you more quickly if you break down in the middle of nowhere. Emergency Assist and ETA say they have around 5000 recovery vehicles each, while the AA has 3000 patrols and the RAC 1600. The AA also has more than 1300 garages, some of which provide roadside repair/recovery and some in-garage repairs, and the RAC has more than 700 approved garages nationwide.

Prices are for a 2017 Seat Ateca unless otherwise stated. *Cover is for the person not the car. **Includes two days’ alternative transport, garage repair estimates and priority access to an RAC garage. ***Over 50s only.

Adapting to the needs of electric car owners

As pure electric vehicles (EVs) become more common on our roads, some breakdown providers are tailoring their services so they can offer assistance to drivers of these cars.

Many EVs and plug-in hybrids can’t be towed with just two wheels lifted like most conventionally powered cars with manual gearboxes. All four wheels need to be off the road, because they can’t be disconnected from the motor. This means the motor could be damaged during towing. 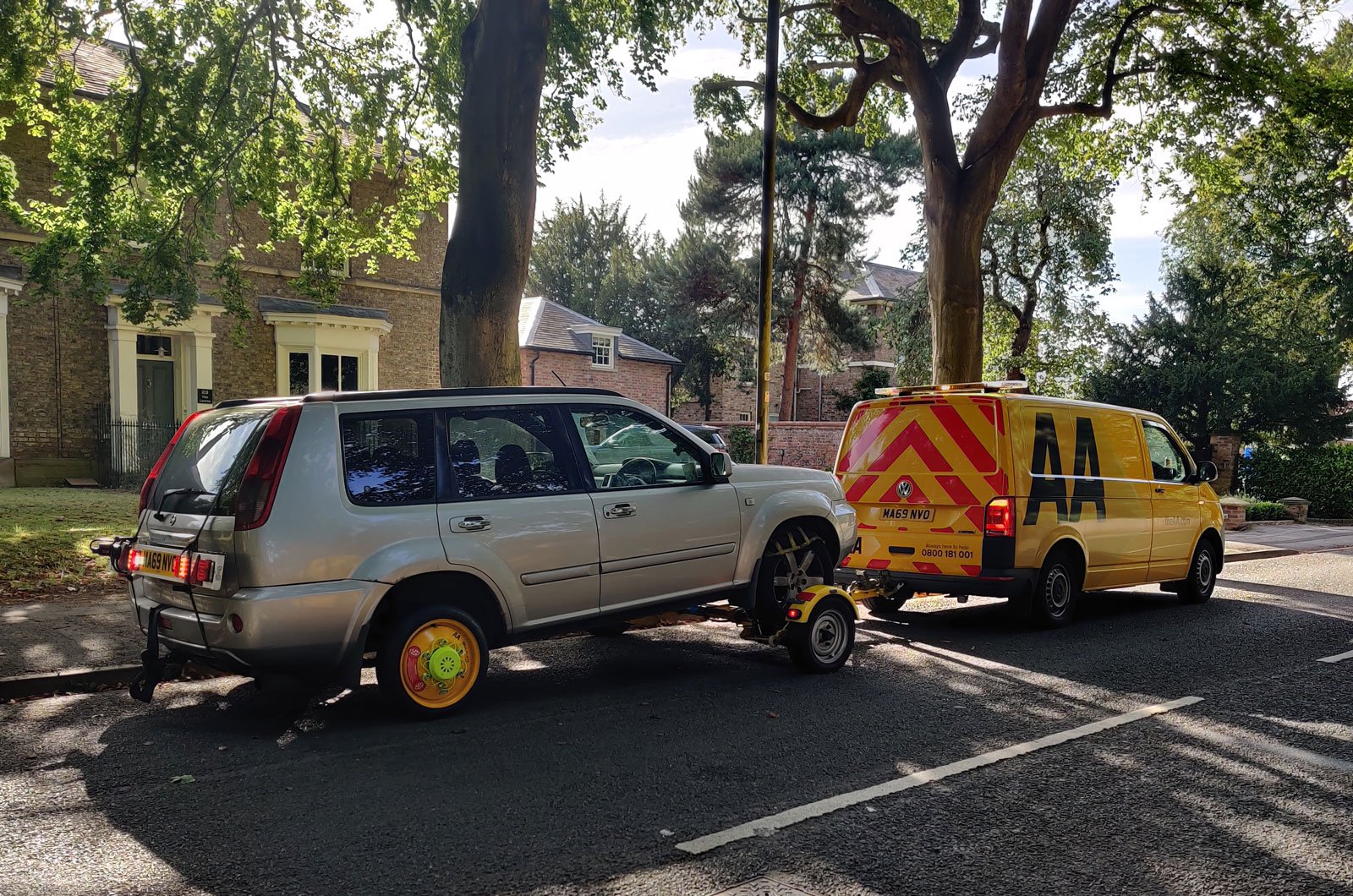 The AA is the latest breakdown provider to come up with a solution. It has developed a freewheeling hub that lets its patrol vans tow cars that would usually need to be lifted on to a flatbed truck.

The two wheels of the car that will be in contact with the road when it’s being towed are removed, and the freewheeling hub is bolted onto each wheel hub. The AA’s universal spare wheel can then be fitted on top of the hub to enable the car to roll but not cause any damage to its motor.

This innovation also enables the patrols to provide a two-wheel tow for 4x4s and other vehicles that usually need to be transported on a flatbed truck. The AA says the freewheeling hub will help it to reduce waiting times for stranded motorists and reduce the CO2 emissions of its fleet, because vans can now be used to recover a higher proportion of vehicles. 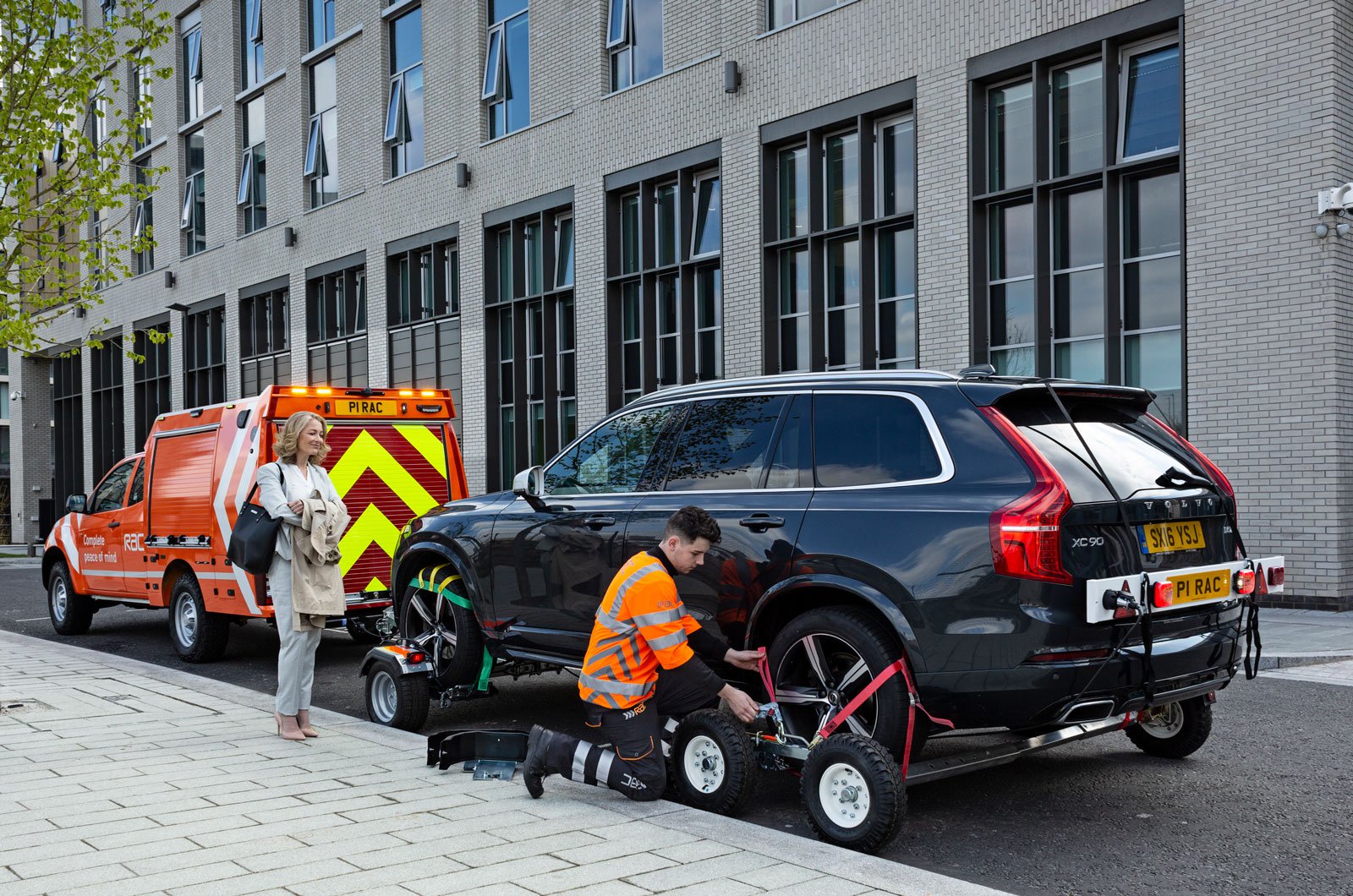 The RAC has developed its own solution, in the form of the All-Wheels-Up recovery system, which is a foldable trailer that fits into the back of a patrol van. At the touch of a button, the trailer can be expanded out behind the van and used to transport a stricken vehicle. It can carry large SUVs, 4x4s, pick-ups and vans, as well as EVs, and enables patrols to rescue vehicles stranded in restricted areas, such as narrow city streets that would be inaccessible to large flatbed lorries.

The RAC has also fitted around 80 of its vans with portable chargers so its patrols can assist EV owners whose cars have run out of charge. The customised Ford Transits can provide a 10-mile battery boost in a matter of minutes. 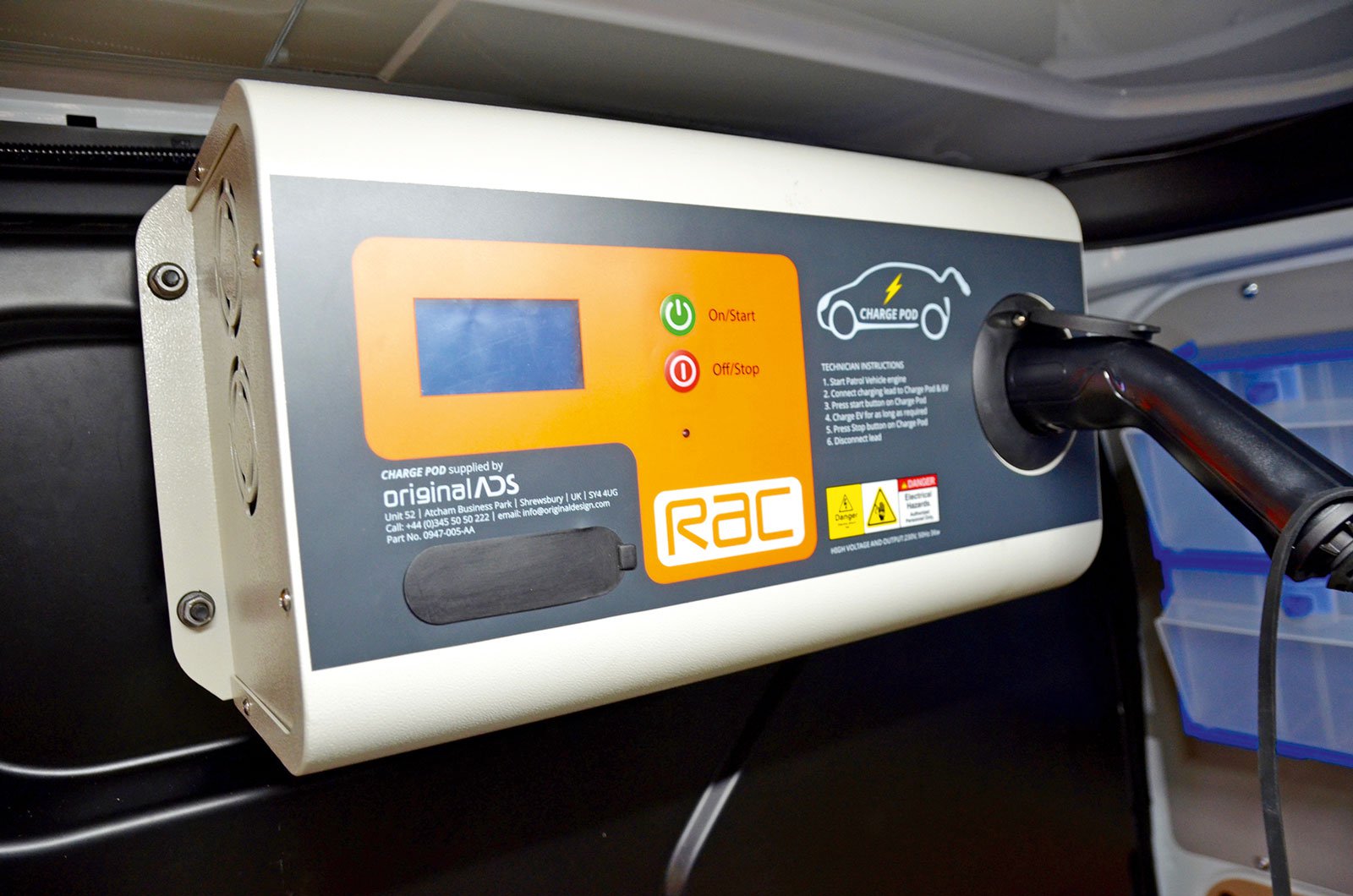 AutoFuelFix (AFF), which started out by offering a service to drain fuel tanks for motorists who’ve filled up with the wrong fuel, has also added EV chargers to its vans. Equipped with 7.2kW charging units and 10-metre cables, the vans can charge any EV’s battery for up to 30 minutes at the roadside, providing around 10 miles of range.

The company has teamed up with insurer LV to provide this service for free to EV owners who take out its specialist EV cover. If you’re not with LV and your EV runs out of charge, a callout from AFF will cost £192.

AFF has 10 vans with charging kit so far, but it offers a 24-hour service and covers all of England and much of Wales. Once your car has been charged, their van will follow you to the nearest public charging point in case it’s not working and you need further assistance.

The AA and other breakdown providers have committed to providing EV owners with a tow to the nearest public charger if their cars’ batteries run out of juice. The AA has also launched an EV support service, offering a telephone advice line for people to use at charging stations, including those at the UK’s first EV-only forecourt in Braintree, Essex. Motorists can get advice on how to use the charger and information about their car. It provides cover on a growing network of charge posts, 5000 at the time of writing, from which it takes around 1200 calls per month. It also has access to several charging companies' back-office systems, enabling it to perform a start, stop or reset on specific charge points to resolve a high percentage of the calls it receives regarding them.

<< Previous | Next: Which is the best breakdown service provider? >>