If you're looking at the two-star rating above and thinking 'that E-tron must be a real slowcoach', then it's important to have some context. It certainly isn't slow; the entry-level 50 quattro model has 309bhp and can do 0-60mph in 6.8sec, with the 402bhp 55 quattro knocking a couple of tenths off that. But compared with its main rivals those figures are on the sluggish side. The entry-level Jaguar I-Pace, for example, will hit 62mph from rest in 4.8sec, while only the pricey 496bhp E-tron S can compete with that – it does it in 4.5sec.

It's not just speed where the E-tron falls behind the curve, because its battery performance is a weak (ish) point, too. Officially, the 50 quattro can do 198 miles with a full battery, although you're more likely to get around 150 miles in real-world driving. Even the Mercedes EQC can top 200 miles officially.

The 55 quattro ekes that out to 254 miles and the E-tron S 223 miles. For comparison, the Jaguar I-Pace can do around 298 miles officially, and we've Real Range tested is at 253 miles, while the latest Tesla Model X officially stretches to 371 miles between charges.

The standard air suspension does a grand job of wafting you along when it’s in Comfort mode. Indeed, the E-tron deals with all manner of lumps and bumps better than a Model X or an EQC, and is roughly on a par with the I-Pace for comfort.

For the smoothest ride, stick with the 20in alloy wheels that come as standard on Technik and Sport trims. That said, the 21in rims you get on the posher trim levels, along with adaptive sports air suspension, don't exactly make the ride fractious.

Switch the suspension to Dynamic mode and things become noticeably more jiggly over broken city streets. On faster, undulating roads, though, it’s more settled, because this mode enables the suspension to keep tighter control over the vertical body movements. 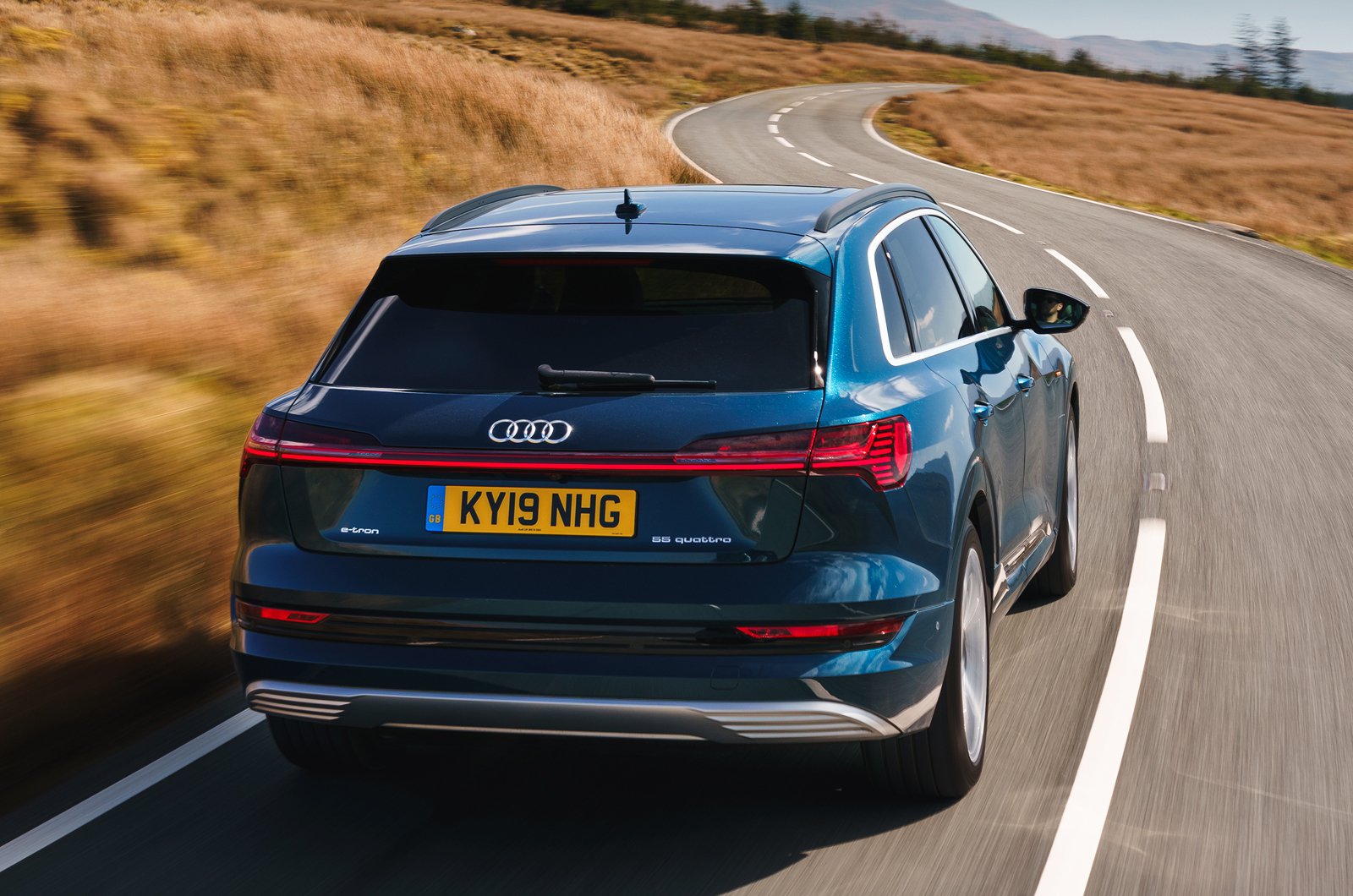 Despite weighing more than 2.5 tonnes with a driver on board, the E-tron handles bends pretty tidily. The suspension does a good job of preventing the car from leaning like a well-known italian tower through corners, the wide tyres provide lots of grip and the steering is precise enough.

If you’re looking for fun, though, we’d recommend you take a closer look at the I-Pace and BMW iX3, or, better still, the lower-slung Tesla Model 3 Performance. They change direction more eagerly and sway around less through bends, particularly the iX3 and the Model 3.

Even if you opt for conventional door mirrors rather than cameras (see visibility section for more on the latter), the E-tron generates next to no wind noise on the move, while road noise is also very well muted. You do hear a noticeable whine from the electric motors at, annoyingly, 30mph, but, overall, this is a quieter car than all of its rivals.

What’s arguably even more impressive, though, is what happens when you slow down. Despite juggling between regenerative braking (using the motors as dynamos to charge the battery while slowing you down) and regular friction brakes, the middle pedal offers a reasonable amount of feel, allowing your to slow your progress smoothly. That’s fairly rare in hybrid and electric cars.

Add in an accelerator pedal that’s very consistent in its responses – as long as you’re not in the Efficiency mode, which adds some dead travel at the top – and the E-tron is a very easy car to drive smoothly.

Superb inside, but let down by a lumpy ride and high pric...